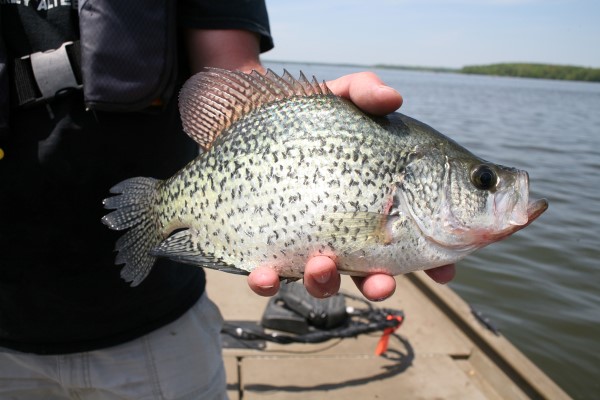 A nice, northern black crappie. “Where the crappie were holding at 12 feet,” Toalson explains, “when the cormorants arrive they go deeper than twenty feet.”

When most of us think of chowder, New England comes to mind. The phonetic variant chowda, is believed to have originated in Newfoundland in the days when Breton fisherman would toss portions of the day’s catch into a large pot, along with other available foods to make a seafood stew. Because this is CrappieNow, we’re going to make crappie chowder.

Commonly, chowder is a seafood or vegetable stew (or thickened soup) often served with milk or cream served with crackers that are broken into the chowder as a thickener. Some varieties are traditionally thickened with crushed ship biscuit.

1 or 2 soup cans milk, depending on how thin you want your chowder

Cook crappie, potatoes, and celery with onion in separate pans with enough water so they will come to boil. When tender, combine all into 1 big pan, and then add soup, milk and butter. Simmer together until hot, do not boil or milk will curdle.

That taste of Italy I promised is Crappie Linguine with White Wine Cream Sauce. In this recipe we shift from crackers being the agent to thicken our chowder to using pasta like linguine. Linguine is like thin flattened spaghetti. Our seafood, fish, in this case, is – you guessed it – crappie.

Cook linguine according to directions and set aside. Heat olive canola oil on medium-high heat in a stove top pan and add crappie fillets. Cook until about 4 minutes, and then add garlic and pepper. Add wine. Reduce wine for 30 seconds. Toss cooked linguine into crappie. Remove to dish and sprinkle with cheese and a dash of hot sauce, if desired. Garnish with parsley.

After dining on one of the scrumptious crappie dishes, there’s a need for a taste of something sweet. I can’t think of a better dessert than my Mother-in-law’s bread pudding. Give Bobbie’s Bread Pudding a try.

Break bread into pieces in a 9×13-inch baking dish. Blend in half the milk. Add sugar and egg substitute, mixing well after each. Dice margarine on top and stir in vanilla, remaining milk, and pineapple. Bake at 350 degrees for about 40 minutes, until firm.

Call me crazy but I love this puddin’ served chilled, however, I think you’ll love it warm from the oven. It’s a big yummy either way.

Sauté onions in butter and oil until onions are transparent, but not well browned. When tender, turn heat to lowest point and sprinkle with flour, stirring vigorously. Pour into Dutch oven and stir in broths. Heat thoroughly and divide among 8 oven-proof bowls. Float a slice of bread atop each serving. Mix equal parts of cheese to smooth paste and spread over bread. Place all bowls on oven rack 4 inches from broiler: heat and broil until cheese melts. Serve at once. Makes 8 servings.

This is good served warm with whipped cream. It taste is very much like a pineapple upside down cake.

Preheat oven to 350 degrees. Cream the sugar and butter together; add the eggs and mix well. Add the pineapple to the mixture, then the bread crumbs and stir well. Bake in an ovenproof dish for 1 1/4 hours. Top with whipped cream. Makes 12 servings.