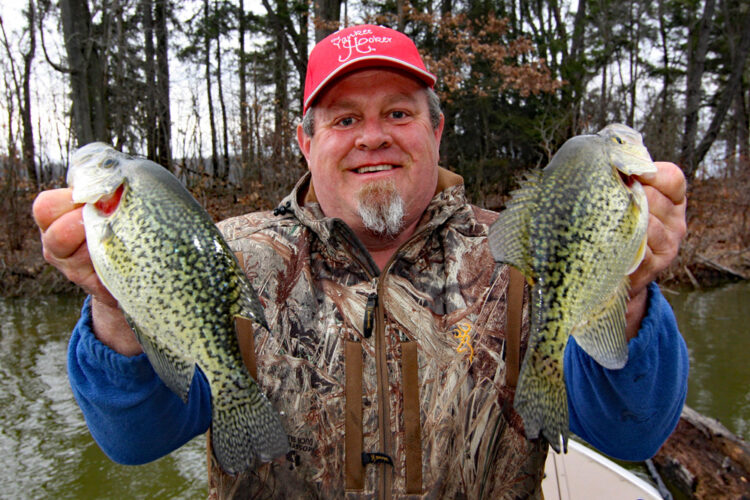 Taking time to organize and re-order needed tackle right now means you will be fully prepared to start fishing as soon as the ice goes off northern lakes. (Photo: Darl Black)

Get Organized Now
Inventory and restock baits and accessories.

Some folks avoid the lake during the bitter February weather. If you’re one of those, Darl Black has some great advice for using your indoor time to get organized and restocked for the approaching fishing season.

At the first sign of ice in December, northern crappie anglers typically pile their tackle in the basement or garage and do not think about it again until April.  However, with the hours of daylight are noticeably increasing in February, suddenly you realize the spring thaw will be coming soon. But this is not the time to sit around dreaming about spring fishing. Now is the time to get organized so you are ready to rock and roll at ice out!

Of course, you don’t have to be a hard water fisherman. Many Southern crappie anglers hang it up in the winter as well. They should be doing the same organizing.

The first thing is to inspect is the line on all reels. Tie a knot and test it. If the line is strong and manageable, and the spool is filled to desired level, I’ll start the spring with it on the reel. Strength and performance features of today’s quality lines extend beyond one season. Periodically applying Blakemore Real Magic (especially when you store rods for winter and again when you bring them out in the spring) will extend the manageability of the line.

However, if the line has taken a curl set like a Slinky or is so twisted that it ties itself into a knot, strip it off and spool on fresh line. I use hi-vis copolymer line on most of my crappie outfits. Line pound-test varies from rod to rod based on specific techniques, but 4-, 6- and 8-pound covers most of the bases.

The next thing is an inventory of your tackle to see what needs to be order.

If you have a decent organizational system for carrying tackle, this will not take long.

I’ve been using Rack System boxes from Plano to carry my tackle. One is the Guide Series Original StowAway Rack System which houses four 3700 Utility boxes and features a large compartment on top. One utility case holds a full assortment of floats and accessories. Two utilities are filled with a wide range of soft plastic bodies sorted by style and color. The final 3700 utility is home to hard baits.

In the top compartment are small utilities holding hair jigs and metal jigging lures, along with bottles of scent and extra bags of my most-frequently used soft jig bodies so I never run in the middle of a hot bite.

The second box is the smaller 4×4 Rack System which supports four 3600 utilities. Three of those 3600 cases hold a variety of leadheads sorted by size. Several types of lead sinkers used in building crappie rigs are allocated to the final case. Inside the top compartment are two smaller utilities: one contains all the small terminal tackle (swivels, etc.) needed for building rigs; the second case has live bait hooks. In addition, there are mini spools of 4,6 and 8-pound line for rig leaders.

STOCK UP ON LURES

Let’s dive deeper into what I carry in my tackle boxes for crappie fishing. There may be a couple items you’ll may want to add this year.

I am heavy into jigs with soft plastic bodies (or tails – depending on how you refer to them). Over a season, I use jigs for casting & retrieving, long-line trolling, dock shooting, vertical jigging, under bobbers and on dropshot rigs. As you might expect, I carry a variety of leadhead styles; Crappie Pro jigheads, Road Runner heads, Brewer Crappie Slider heads and generic round heads are nestled inside.

Be sure to have a selection of both natural hues representing baitfish for clear water and some bright bold colors for dingy or muddy waters.  I like to experiment with new colors, and over the years have added to my “must have” list. Old standbys and new favorites include: Monkey Milk, Chartreuse Glitter, Double Silver Rainbow, Threadfin Shad, White/Chartreuse Tail, White/Hot Pink, Black/Hot Pink, Watermelon/Chartreuse Tail, Electric Chicken, and Bluegrass.

Floats are important tools for crappie fishing. I have both fixed and slip styles in my box, including some weighted floats for long casts with light jigs. Don’t forget the accessories – bobber stops, extra silicone sleeves and BB shot to balance floats.

Rig-making items include several types of swivels (inline, snap swivel and 3-way) along with #4, #2 and #1 Tru-Turn bait hooks. And don’t forget the egg sinkers and bell sinkers.

Open my hard bait utility to find a selection of Johnson Crappie Buster Shad Cranks for trolling – although it’s not something I do a lot of. You will also find a couple two-inch Rapala Ripping Raps – my favorite crankbait to cast for crappies in the summer and fall. Also, there are a couple suspending jerkbaits – SuspendDot weighted three-inch Rapala Husky Jerks to be exact.

Lastly, I would never hit a lake in late fall for crappies without a supply of small jigging spoons and blades baits. These baits are dynamite for vertical presentation in deep cold water.

Stock up now and be ready to fish when the ice goes out.