In the Spotlight: Barry Morrow 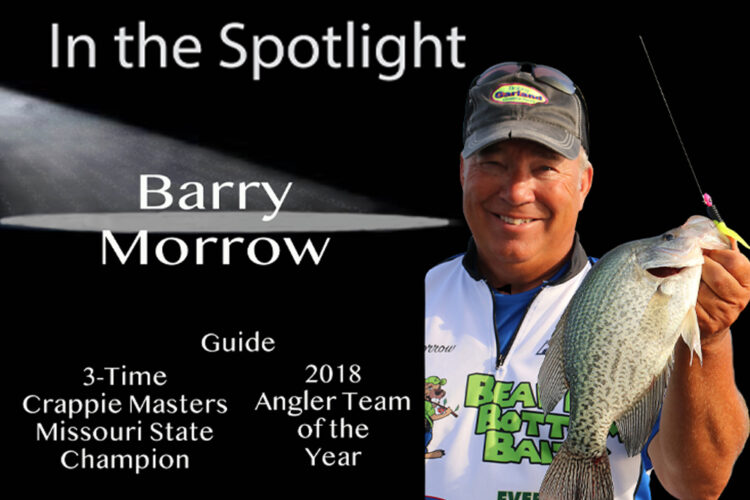 In the Spotlight: Barry Morrow

Barry Morrow is a respected guide and fisherman. During the past few years, he and partner Chad Maupin have made an impact on tournament fishing.

Barry was born in 1963 in Marshall, Missouri, where he grew up and then spent 15 years teaching and coaching. He worked for Clinton in school administration and Dixon as superintendent. He is married and has a son and daughter.

Fishing started at six years of age but competitive crappie fishing started around 2004, when he and John Shannon dominated Truman tournaments with five wins including NACA, CAST and the Crappie USA Regional.

Big fish? “My biggest crappie was a 3-pound, 13-ounce on Grenada, Mississippi, fishing with my wife the day before a tournament. I caught it on a jig and minnow. It was 19 1/8 inches long. My second largest was a 2.79 caught on a crankbait at Grenada.”

Highlight? “It was the Crappie Masters Angler Team of the Year. Most people don’t know the drama and pressure that goes into it. Tommy Scarlis and Mike Baker led from tournament one. Paul Turner and his wife came up to challenge. We started fishing at Washington and got second, followed by a third at Grenada. That’s when we decided we had a chance to try for it. We won Lake of the Ozarks and were in a position where the last two tournaments we had a shot. Paul Turner fished by himself and won at Mark Twain. The last tournament at Truman was real pressure and we had to finish in the top four or higher. We won the tournament and AOY even though we only fished eight tournaments that year. That was special for us.”

Strength? “One-pole jig fishing. I love it. I was told my weakness was finding fish. I could catch them but…  So my goal after hearing that was to prove them wrong. Now, after being a guide for years and tournament fishing, I’ve found fish in all seasons and conditions.”

Favorite lake? “Truman, my home lake. A fisherman can fish a lot of different ways. It’s recently produced a few three pounders. I like Grenada because a fisherman never knows if the next bite is a fish of a lifetime.”

Favorite season? “Prime to me is fall. I’ll catch some big fish in the fall. I compare it to deer fattening up for the winter. Crappie are feeding actively because they know their metabolism will slow down later.”

Pet peeves? “Too much pressure around us in tournaments. I try to find fish where others aren’t fishing but we never know until tournament morning how many others will be there. It’s nobody’s fault. But fishing pressure on day two is a problem for the leaders. Fishermen come by on day one, don’t stop to fish, but after knowing first day weigh-in results, come in and fish around the leaders on day two. Talk sportsmanship, family, a shot at big fish or whatever, it boils down to fishermen either having respect for others or they don’t. That’s why all tournaments should cut back teams on the second day of two-day tournaments.”

Hobby? “I love to fish for relaxation, but I’ve also been known to hit a golf ball.”

Favorite boat food?  “Anything in the boat. When catching fish, I never eat, but if it gets slow I love to eat.”

Biggest changes you’ve seen in crappie fishing?  “The first was Side Imaging. It made it easier to locate fish before ever dropping the trolling motor. The next was Humminbird 360. The current one is LiveScope, and probably is changing crappie fishing more than any of the others. In the last classic, seven or eight of the top ten teams were using LiveScope and one pole fishing. The rest of the field didn’t know what they were missing.”

What is something most people don’t know about you? “I love kids. I went to church with my grandma when I was young and we would work in the nursery. I’m sure that’s part of the reason I’ve enjoyed education and helping kids get on the right path.”

How would you like to be remembered?  “As someone who cared about others and gave back, always trying to help and teach.”