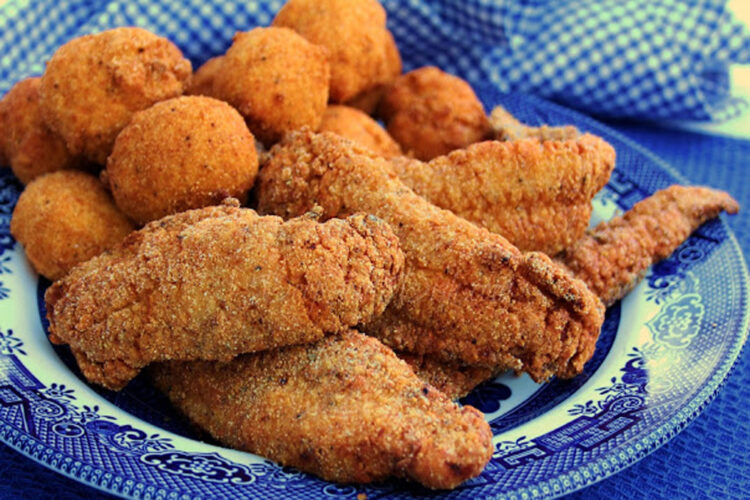 A great many recipes for frying fish include cornmeal or corn flour. While cornmeal and corn flour are both made from milled, dried corn, they differ in texture. Cornmeal feels gritty, and corn flour is fine, much like wheat flour. The degree of milling determines their texture. Corn flour is finely ground and cornmeal is coarsely ground. Both contain the hull, germ, and endosperm of the corn and are usually yellow, but they can also be white or blue depending on the variety of corn used.

Corn flour and cornmeal can be used interchangeably in most recipes, but understand that using one for the other will yield a slightly different result. For example, if you’re making pancakes or muffins, using cornmeal in place of corn flour will give them a grittier texture. Conversely, using corn flour in place of cornmeal will give baked goods like cornbread a finer, less crumbly texture.

Corn as we know it today would not exist if it weren’t for the humans that cultivated and developed it. It is a human invention from years of manipulating pollination programs started more than 7,000 years ago in central Mexico. Corn is a plant that didn’t exist naturally in the wild. It was started from a wild grass called teosinte. Teosinte looked very different from our corn today. The kernels were small and were not placed close together like kernels on the husked ear of modern corn. Indians throughout the Americas depended on this crop (maize) for much of their food.

About 1,000 years ago Native Americans started migrating from Mexico and Central America. They carried corn with them north and south, spreading it like a Johnny Appleseed. In time, maize became cultivated south into Peru, north into the Southwestern United States, and into the southeastern woodlands of present day North America. In the late 1400s and early 1500s Europeans “discovered” corn when they made contact with the native peoples. Up until then maize was unknown elsewhere in the world. When Columbus “discovered” America, he and other explorers to regions supporting the growth of maize also discovered corn. It’s unknown when maize was first ground to become an ingredient enhancing the flavor fishy dishes.

Cornmeal and corn flour are versatile ingredients that can enrich the texture and flavor of many foods. Use either one or a combination of both as a breading for fried fish or okra, incorporate into a waffle or pancake batter or bake into cakes, muffins and hushpuppies. I frequently combine cornmeal with all-purpose flour for breading fish fillets for frying to vary the taste and texture. There are a great many recipes with different combinations of cornmeal and corn flour. It’s fun to play with dry combinations and batters for fish since the combinations and seasonings seem almost endless.

Place fillets horizontally on cutting board. With a sharp knife, cut thin 1/4-inch wide strips at a 45-degree angle. The flesh is easier to cut when the fillets are partially frozen. Dust fish strips moderately (or heavily if you prefer) with cayenne pepper. (TIP: Wear gloves for safety when using hot peppers.) Gently tumble together to evenly coat all strips. Strips should be universally pink when you are through with this dry marinade. Place fish strips on a plate or pan and set aside for a few minutes to thaw. Heat oil in deep-fryer to 365 degrees F. Pour enough corn flour into a bowl to bread the strips and then season with salt and black pepper. Place thawed fish into seasoned corn flour and tumble gently until all strips are evenly coated. Deep fry in hot oil for about 3 minutes or until done. Fish should be golden brown, slightly crisp outside and moist and flaky inside. Drain and serve. Serves 4 to 6.

Preheat oil to 370 degrees F. Combine cornmeal, self-rising flour, sugar and salt. Mix well. In a separate bowl, combine jalapeños, onions, buttermilk, egg and cheese. Add to dry ingredients, stirring until just damp. Cover with plastic wrap and let rest for 5 to 7 minutes at room temperature. Form half-dollar-size balls of batter in a tablespoon, carefully drop into heated oil. Turn hushpuppies frequently to cook evenly. Test for doneness when they are a golden brown. Drain and enjoy. Makes about 30.