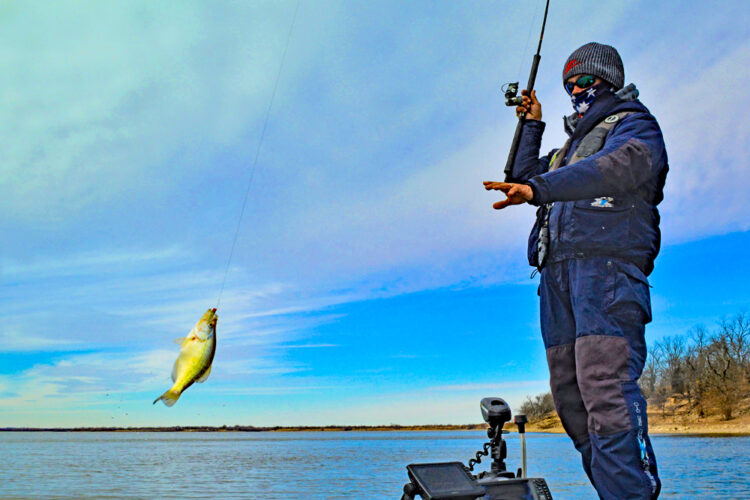 Joe Bragg got a sneak peak of what spring will bring by catching limits of crappies on Kansas reservoirs such as Melvern.  Photo: Brent Frazee

High water kept Kansas fishermen off reservoirs in 2019, but that flooding was a blessing in disguise.

That goes a long way toward describing the aftermath of the record flooding that kept Kansas fishermen on the sidelines for much of spring and summer, 2019.

At this time last year, a nightmare was already developing in the Sunflower State. Nonstop rain caused water levels in many reservoirs to shoot up to record levels. Boat ramps were inaccessible, fish scattered in the new cover, and marinas became islands in the high water.

But those dark rain clouds that hovered over Kansas had a silver lining.

The crappies got a relaxing vacation, with few lures tossed their way. And they got fat and sassy when the shad spawn boomed. Crappie numbers also took off, with the jungle of new cover aiding in spawning and nursery habitat.

By the time fishermen could get back on the water in fall and winter, they could immediately see the benefits of that prolonged stretch of high water. The crappies were fat and ready to put on even more weight.

That bodes well for spring, when the fish move into the shallows of Kansas reservoirs to feed and spawn.

“I think we’re set up for some of the best crappie fishing we’ve had in years,” said Doug Nygren, chief of fisheries for the Kansas Department of Wildlife, Parks and Tourism. “We had a big carryover of fish because our reservoirs were inaccessible for a long period of time.

“Those fish had plenty of food, and they really put on the weight. I’ve already seen some crappies caught this winter that were as plump as any I’ve seen in Kansas.

“I think this will be a good year to be a crappie fisherman.”

Looking Ahead to Spring

Sitting in his boat on Melvern Reservoir in eastern Kansas on a cold day in February, Joe Bragg had a good view of the flooding’s long-term benefits.

Hovering over a brush pile in 18 feet of water, he watched as waves of marks crossed the screen of his LiveScope.

“Those are all crappies,” he said. “That’s one huge school.”

Seconds later, Bragg started thinning out that school. He dropped his one-quarter-ounce jig until it was just above one of the marks, and he immediately felt a thump.

He set the hook and felt the heavy weight of a big crappie. Once he swung it into the boat, he marveled at the bulging stomach of the fish.

Bragg tossed that fish into the live well, then dropped his jig back for more. And there were plenty more.

Before long, he had a limit of 20 crappies and he was reflecting on how good the winter fishing had been at Melvern. 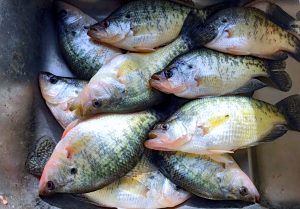 “People are going to be talking about the winter crappie fishing in Kansas this year for some time,” he said.

Bragg caught those crappies using a 10-foot B&M ultralight rod and a one-quarter-ounce jig. He used Z-Man baits such as TicklerZs, Slim SwimZs, and MinnowZs  to catch those crappies.

For Bragg, who runs the Thump30 Guide Service out of his home in Topeka, the excellent fishing has been a welcome sight after 2019. As with other guides, he saw the flooding almost wipe out his bookings for most of the spring and summer last year.

Melvern, one of Bragg’s favorite reservoirs, was among the Kansas bodies of water hard-hit.  The water level there reached an all-time high in early June (almost 20 feet above normal), and it took weeks before the reservoir was back to normal.

The region where Melvern is located received 50 inches of rain in 2019, far above normal. Bragg and other fishermen hope they never see another year like that.

“It was tough, not being able to fish a lot of these reservoirs,” Bragg said. “But we’re making up for it now.

“I’m just finding an amazing number of crappies in places.”

Melvern is just one example of the resurgence Kansas crappie reservoirs are experiencing.

Few bodies of water in the state were spared from the flooding. Tuttle Creek, a reservoir with a huge drainage, soared to more than 50 feet above normal.  Perry, Clinton, Milford, Council Grove, Pomona, Hillsdale and El Dorado – all good crappie-fishing lakes – were flooded for an extended period of time in 2019, and had low fishing pressure. 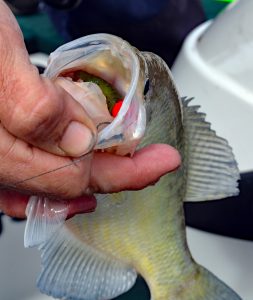 Bragg fished many of the reservoirs on that list during the winter, and he is excited by what he has found.

Even when fishing in some nasty weather – cold temperatures and even colder wind chills – Bragg and his clients caught crappies.

For the fair-weather fishermen who like to wait until late April to fish for Kansas crappies, that winter fishing is just a sign of things to come.

When those fish come to the banks, it’s going to be ‘game on,” he said. “I think some people are going to be surprised at how many fish there are and how fat they are. They’re just in excellent shape.”

With its rocky banks, fertile water and abundant shad, Kansas reservoirs have historically produced some of the Midwest’s best crappie fishing.

That reputation could grow even larger after the events of last year.

“I think we’re set up for good fishing in the next couple years,” Nygren said. “The year-class of crappies from last year should be good for our future.”

Brent Frazee was the outdoors editor for the Kansas City Star for 36 years before retiring. He’s won more than 50 state, regional and national awards for his writing and photography. He received a lifetime achievement award from the Outdoor Writers Association of America in 2014, and was inducted into the Waterfowlers Hall of Fame in 2015. He lives on a beautiful lake in Parkville, Mo., with his wife Jana and his chocolate Lab, Zoey.