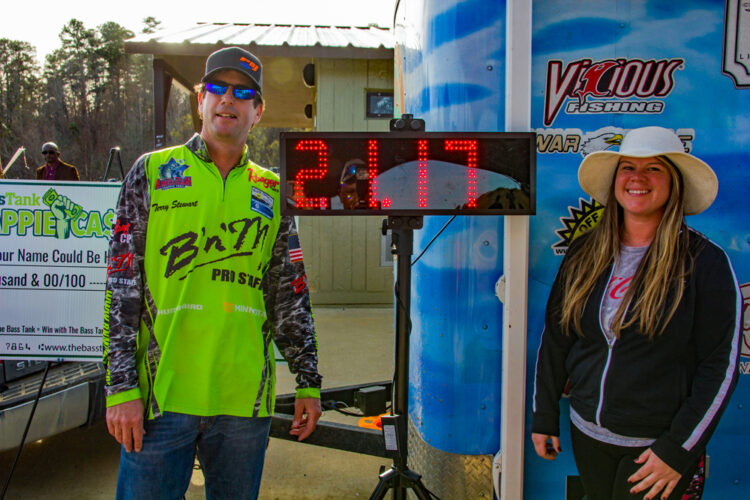 On March 7th, fishing on Lake Grenada in Mississippi, Terry Stewart and his daughter weighed in seven crappie that weighed an incredible 21.17 pounds. Stewart was using a relatively new technique he calls, “Drop Down on ‘Em.” (Photo by: Bernard Williams)

For many crappie anglers, especially the professionals, the Garmin LiveScope has changed crappie fishing to the extent that if you’re fishing without one, you aren’t catching you just fishing.

Initially it was the spider-riggers using them mostly, but now more and more single-pole crappie anglers are converting.

There is a new technique coming on the scene called “Drop Down On Em.” It’s what many of the top tournament winners have employed.

Professional Tournament Angler Terry Stewart says, “I’ve developed the confidence with the LiveScope to use the single-pole only in my tournaments. It’s been over six months since I’ve used my trolling poles. A year ago, you could not have made me believe I would not be trolling.”

He says boat control is the key to catching fish in the open water. Stewart has mounted twin Minn Kota Terrova’s on the stern of his 22-foot Ranger and uses an Ultrex on the bow.

“Using the LiveScope I stretch my range out to 50 or 60 feet. When I spot a fish in the open water, I head that way,” said Stewart. “When I get within 30 feet, I use the back trolling motors to put the brakes on. I then ease up to within pole reach and drop my jig directly on the fish. The key to boat control is to fish into the wind as much as possible.”

Stewart adds, “I try to put my jig directly on the nose of the fish, and I hold it as still as possible. I think a lot of my strikes come from the fish being annoyed more so than the fish feeding.” 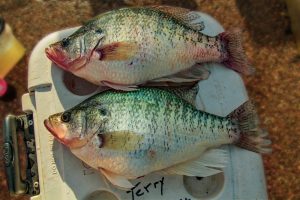 But let’s get real here. Investing in a Garmin LiveScope and mounting THREE trolling motors on your boat is beyond the reach, or desire, of the average crappie angler. But among the folks crappie fishing for money, it’s coming and perhaps you can adopt some of their technique(s) even without spending $10,000.

Stewart uses two types of jigs, hair, and soft plastics. His pole of choice is a 14’ B’n’M Bucks Graphite Jig Pole (BGJP) or a B’n’M Pro Staff Trolling Rod (PST). I plan to change to the new B’n’M STICK. I am going to pick up one sooner or later; it may make me change my style.” According to Stewart, “The STICK will make me fish more efficiently, I can get my bait back in the water much quicker and control those bigger fish a lot easier. Lots of times, a big fish will head towards cover once I set the hook. If I can keep a fish out of heavy cover, my chances of landing the fish are much greater. ”

I asked Terry what’s the furthest he ever chased a fish, “I hooked a fish on Eagle Lake and got it almost to the boat, the fish came off. I chased that one fish about 10 minutes before I could get it to bit again. Our lakes in Mississippi have so many fish; it’s not feasible to chase one too far if you look around, you can find another fish nearby. Our Mississippi lakes we fish are loaded with big crappie, I didn’t realize this until I started Livescoping.”

My next question was, how many fish do you catch in a day on average? “I fished a Crappie Masters Tournament on Lake D’Arbonne in LA a few days ago. The wind made boat control terrible on Friday; it caused the fish to be spooky. I managed to catch 20 or so on day one. Day two was a lot better. The wind laid down, and the bite was a lot better. I fished with my daughter, Terra Stewart. She kept the count, and at the end of the day, we had 57 keepers.”

I asked Terry to simplify the “Drop Down On Em” technique. “It’s quite simple; you move around until you see the size fish you want, you hold your jig out of the water until you get within pole length. If the fish aren’t spooky, you can pitch the jig to them. If they’re spooky, I try to drop it on their nose. It doesn’t take long to see if the fish hits your jig or swims off. Sometimes they don’t want the rubber body; I will switch to a hair jig. Very seldom is I use live bait. I’ve seen it spook fish more often than not. Using jigs makes fishing a lot easier. It’s one less factor you remove from the equation.”

Terry showed us how to use a LiveScope on Grenada Lake March 7th, he “Dropped Down On Em,” with his best seven crappie tipping the scales at an incredible 21.17 pounds. That included two 3.83’s, a 3.63 and a 3.47 along with three more fish in the high two-pound class. One pole and a net-man/woman. He’s not revealing any information; we have to wait until tournament season is over to find out the exact equipment and jigs he used.

Stewart is also a crappie guide fishing on most North Mississippi lakes. Contact him 601-502-5699 or email: tlstewart1@yahoo.com.