In the Spotlight: Roger Gant 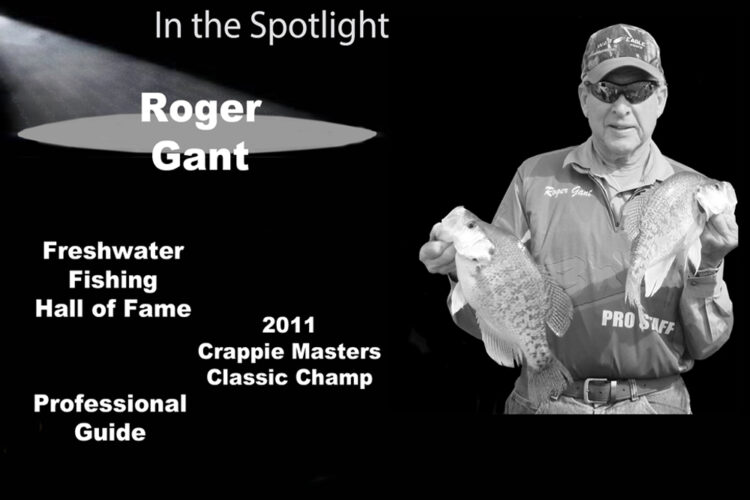 Roger Gant – Take a look at his side-pulling technique, highlights and a few personal tidbits

He is known for side pulling, a technique he made famous when featured on television shows and magazine articles. The technique is basically drift-trolling with the boat moving sideways. It provides a wide trolling path and gives everyone in the boat an equal chance to catch fish.

“One of my early tournaments was a Crappiethon USA in 1989,” says Gant. “We fished Yellow Creek in deep water. I fished just like I guided, not realizing that for a tournament, numbers weren’t as important as catching the bigger fish. But we won. I’ve learned a lot since then.

“I’m not sure, but I believe my first classic was at Caesar’s Creek, Ohio (1996). We lost our two big fish. They died because they had the jig down deep in their throats. We would have been close but instead we finished fifth.”

Gant’s highlights include his 2020 induction into the Freshwater Fishing Hall of Fame and two great back-to-back Crappie Masters Classics. Roger, along with his brother and best friend, the late Bill Gant, won the 2011 Classic on the Alabama River and followed up the next year with a fifth-place finish on the Tennessee Tombigbee.

Fishing hero:  “Bill Dance. I’m so old, most of the people I would call crappie heroes are ones I’ve grown up with.”

Biggest crappie:  “Three-and-a quarter, on a cane pole at Pickwick when I was a kid.”

Technique?: “Side pulling came along about the same time as the first LCD graphs, and it opened up a whole new way of fishing in open water. We moved from the bank to deep, open water. Side pulling lets us cover a lot of area by drifting or using the trolling motor to move. The trolling path is wide since the boat is sideways. Not only is it more fun, but we miss fewer fish. The baits are in the water 100 percent of the time. The wind blowing is not a problem.”

He says the different thing about the technique is the trolling motor being close to the back fisherman and mounted on the side of the boat. Its advantage over forward pulling is the fishermen set the hook on every bite and everyone in the boat has an equal chance to catch fish.

Gant has been instrumental in developing a few products as well. Big hair jigs, usually in very bright colors, has been the go-to bait for his technique. His brother was the jig-maker. War Eagle built a boat using his ideas to compliment his side pulling style. He helped design BnM’s “The Difference” pole.

Kent Driscoll, BnM Pro Staff Manager, says, “There is a reason Roger Gant has been inducted into the Freshwater Fishing Hall of Fame. His time on the water, facing all types of conditions, many guide trips and his tournament experience, sets him apart and puts him at the highest level of crappie fishing. He is a sonar guy who can catch fish suspended, hugging bottom and on stumps and brush. Roger is the reason for ‘The BnM Difference’ pole because it was made to his specifications, he tested prototypes and helped us come up with this high quality pole. He is an old-school outdoorsman who is great at what he does.”

Any lost fish that still bothers you?:  “The one fish that haunts me was at Grenada. She was in about three feet of water. Bill set the hook on it. We had seen several three-pound-plus fish, and I mean the ones we’ve weighed. If there was ever a 4.5-pound crappie, that was it. Bill’s pole loaded up, I grabbed the net, the fish came up and rolled and the jig popped out of its mouth. Bill looked at me and said, “Unbelievable.” All I could say was the same thing. That fish haunts me today in my sleep.”

Strength and weakness?:  “I can go to a lake I don’t know anything about and I’m able to catch fish. My weakness is shallow-water fishing.”

Advice about life?:  “I think people taking time to do what they really enjoy is good for them.”

How would you like to be remembered?:  “As someone who was pretty good at a fishing technique, had fun doing it and did it my way.”