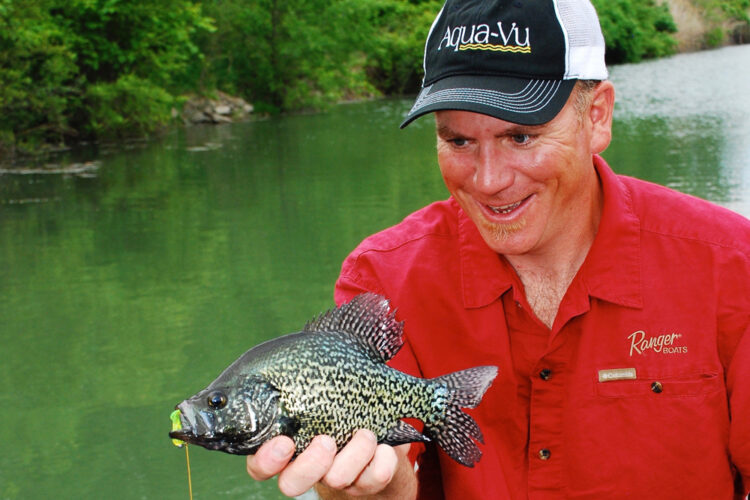 Even in Michigan, crappie put on their tuxedos for the spring spawn. Joe Balog caught this dark male crappie fishing with a tiny jig and flipping it under boat docks.  (Photo: Mike Gnatkowski)

In a land where walleye, smallmouth and muskies rule, many anglers are missing out on some crappie hotspots

Crappies are filler for many Michigan anglers. They fill in a time when the season is closed for walleye, pike and bass. Specks also fill in a time between ice fishing and open water.  Here are some bodies of water sure to be crappie hotspots this spring.

Yoopers tend to be consumptive orientated. There’s nothing wrong with that.

Crappies don’t have a big following in the Upper Peninsula, but that’s changing.

Shallow coves on the west side of South Manistique Lake are where to begin your search. Later, developing weed lines off Long Point and Norton Island are prime spots.

The Groveland Mine Ponds in Dickinson County include South Lake (340 acres), Island Lake (175 acres), East Lake (164 acres) and West Lake (220 acres). All have black crappie populations, but West Lake has the most. By far. All these waters have good, updated boat launches. The access road back to South Lake is quite rough, though.

Crappies are a new challenge for traditional Yooper panfish and walleye anglers.

Chippewa County’s Roxbury Pond East is proof that big things come in small packages. Just 4 acres, you wouldn’t think that Roxbury Pond would be capable of producing much of anything, but it seems crappies have taken a liking to the place. Stocked with black crappie in the fall of 2016, a quick 2017 netting survey found good survival. Roxbury Pond East received 10 brush bundles placed by the MDNR Fish Division and USFS. Those are good places to start your search. Opportunities should steadily improve here as the age class structure improves. Since the lake is carry-in only, it’s the perfect spot to kayak.

Chippewa County’s, Whitmarsh Lake, is not very big either at 10.5 acres, but it has big crappie potential. Crappies up to 10 inches are consistently caught here. The access is directly off of Strongs Road southeast of Eckerman.

Alger County’s 266-acre Deer Lake is just inland from Shelter Bay. In the springtime, crappies stack up in coves on the north side of the lake. A deep-water lake, crappie suspend off shore protecting them from most anglers. Having a portable LCG is critical for finding summer schools of specks. There is an improved MDNR launch at this lake.

The 1,270-acre Belleville Lake is the best for numbers and moderately sized fish. You’ll catch both black and white crappies in the 9- to 10-inch range. There are bigger fish available. The entire Huron River system offers turbid, stained water that crappies love.

The 975-acre Ford Lake produces outstanding spring crappie fishing, too. The crappies population has been down in Ford Lake in recent years, but fishing is improving again. Located in east-central Washtenaw County, Ford Lake gives up crappies up to 14 inches. Unlike Belleville Lake, Ford Lake doesn’t have a well-defined river channel running though it or woody debris. In the spring, look for crappies in the shallower west end of the lake near the islands and in the back of bays. There’s a launch off Huron River Drive.

Located just north of Ann Arbor in Washtenaw and Livingston counties, 677-acre Whitmore Lake receives a lot of fishing pressure. Whitmore Lake gives up stingers of spring crappies, many of which will push 12 to 14 inches. Look for weed beds in 5 to 15 feet of water. Wear polarized glasses to spot schools of suspended crappies. Pay special attention to docks and points. Suspending a white tube jig below a slip bobber is deadly. Contact the Ann Arbor Convention & Visitors Bureau at (800) 888-9487 or on the web for information on bait shops and lodging facilities in the area.

Famous for its smallmouths and muskies, Lake St. Clair has a pretty good crappie population, but they can be tough to find. In the spring, they concentrate in the marinas and canals.

Anchor Bay is a myriad of shallow bays and canals crappie stack up in. Crappie topping 16 inches aren’t unheard of.

(Mike “Gnat” Gnatkowski has worn a lot of different hats during his years in the out-of-doors. He has been an outdoor writer/photographer/book author for more than 40 years. He continues to contribute to an array of outdoor publications as a freelance writer/photographer. He also scribes a very successful blog at GNAToutdoors.com).