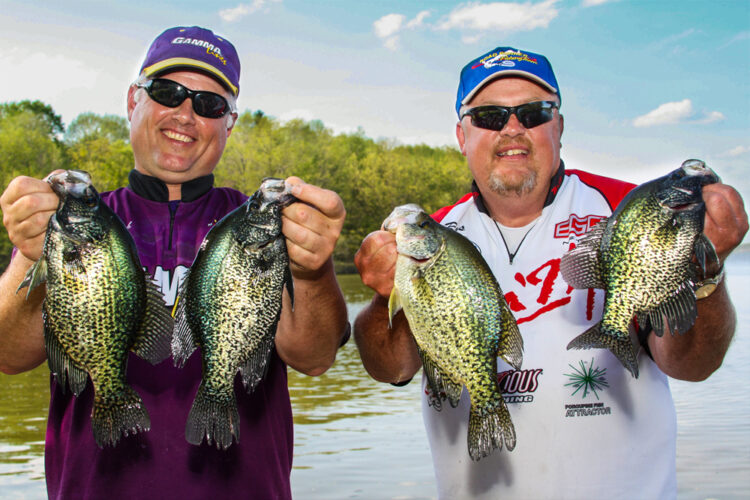 Pymatuning black crappies caught during the spawn period from the edge of a milfoil bed.

An interesting fish-hold structure at Shenango is the submerged canal towpath.

Double Down on Crappies

Pennsylvania’s 13,500-acre Pymatuning Lake has maintained a reputation for well over half a century as the best crappie lake in the state – attracting fishermen from all over the Keystone and neighboring states.

However, what local anglers know that visiting anglers may not realize is another lake a short distance from Pymatuning actually hosts a crappie population that is also robust. Just downstream about 25 miles is 3,560-acre Shenango River Lake.

Sister lakes, you might say, related by sharing the same Shenango River water. But they are certainly not twins. Pymatuning, the elder of the two, was dedicated in 1934. Shenango, the younger, was impounded in the late 1960s.

Pymatuning Lake is the center piece of Pymatuning State Park. Regulations on this lake restrict boats to a 20-horsepower limit. The earthen dam was built on the headwaters of the Shenango River, inundating the Great Pymatuning Swamp. The water rose over fairly flat land, resulting in a wide lake with relatively shallow depth. The maximum depth of about 28 feet is near the dam, and the lake is dotted with multiple islands.

Pymatuning maintains a relatively stable pool and does not go through the dramatic fluctuations which most flood control lakes do. A stable pool and moderately clear water support a variety of aquatic vegetation.

Shenango River Lake, a US Army Corps of Engineers project, was designed solely for flood control. There is no horsepower limit on Shenango Lake; therefore, speed boat traffic during the summer season can be intense. But up until July, anglers reign.

The water in Shenango Lake never approaches the clarity of Pymatuning Lake; instead it is off-color – coffee with double cream would be good visual.   Due to unexpected and dramatic changes to the lake level coupled with off-color water, aquatic plants have never become established in Shenango.

Black and white crappies are found in both Pymatuning and Shenango. A nine-inch minimum and 20-crappie limit applies to both lakes. Crappies range up to about 14 or 15 inches in length, with anything over 16-inches regarded as exceptional.

How big can they grow? A 20-inch 4-pound black crappie was caught in a Fish Commission spring sampling net at Pymatuning about four years ago. The largest verified angler-caught crappie from Shenango was a 3-pound 8-ounce white.

Due to rapidly warming backwaters, Pymatuning shallow water crappie action begins in April almost immediately after ice-out. The Shenango bite kicks in a little later. With black and white crappies cycling through the spawn period at slightly different times, shallow water fishing opportunities extend through May and into early June on both lakes.

An abundance of shoreline-related wood cover holds crappies at both Pymatuning and Shenango. Pad beds and emerging milfoil are crappie-holding cover available only at Pymatuning.

Dipping or casting with 1/16-ounce jigs around cover, or fishing a minnow below a bobber are tactics applied by most anglers when fish are near the banks.

Severe northern cold fronts play havoc with spring fishing, forcing crappies to retreat to slightly deeper water. If not found around visible cover, anglers must be prepared to turn on the sonar and go hunting.

Under tough conditions, several large submerged stump fields in the north end of Pymatuning always seem to produce crappies. Drifting in 5 to 8 feet of water with a minnow on a drop-shot rig is one option. Spider rigging is another option that is practiced by more and more anglers each year on this northern lake.

Moving off the bank at Shenango means an angler must locate man-made cribs or brushpiles – many installed by the Corps habitat program, but others dropped by individuals without an approved permit.

An interesting fish-holding structure unique to Shenango Lake is the old Erie Extension Canal and Towpath which runs the entire length of the reservoir. Much of the raised towpath is shallow enough and close enough to the east bank of Shenango Lake that it attracts cold-front crappies that have fallen back from the shoreline. Furthermore, some sections of the towpath serve as bedding area for white crappies which spawn slightly deeper than blacks.

Whether you are thinking about a family fishing vacation or a weekend trip with the guys, you can double down by planning to fish Pymatuning and Shenango. While a boat with a 20 HP motor allows ease of fishing both waters, it is possible to fish select areas of Pymatuning on an electric motor if your boat is equipped with outboard higher than a 20 HP; numerous ramps are located around the lake make it easy.

Pymatuning State Park offers campgrounds and rental cabins.  Also, there are numerous cottage rentals around the lake. One of the most interesting attractions at Pymatuning is the state fish hatchery at Linesville which features a two-story viewing tank containing a wide variety of area fish species. For further information on Pymatuning area attractions and boutique shopping, check www.VisitCrawford.org. Shenango Lake has a campground managed by the Corps. Go to www.VisitMercerCountyPA.com for additional information on area lodging, shopping and the Erie Extension Canal Museum.