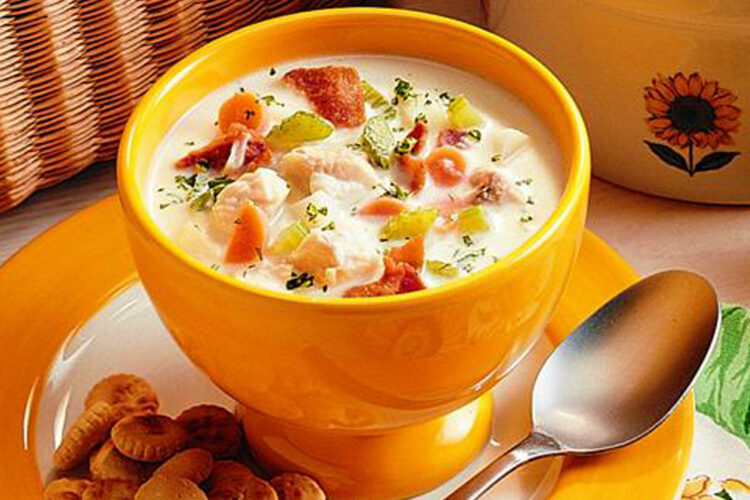 Crappie with an Italian twist

Cook crappie and potatoes in a covered pan with enough water so it will come to a boil. Sauté celery and onion until tender; drain. Combine all into one Dutch oven or large pot. Add cream of mushroom soup, evaporated milk and butter. Simmer together until hot. Do not boil or milk will curdle. For extra flavor and texture, you can top your soup with crumbled bacon and/or shredded cheese. Serve with fresh bread and tablespoons suitable for nice big mouthful.

A Short History of Spoons

A few years ago, I began making wooden kitchen utensils in my shop where I’d built western cedar-strip canoes. There’s a vast difference in scale – a seven-inch butter knife to a 15- or 19-foot canoe. The transition to a much smaller scale dragged me into the history of kitchen utensils.

When do you think spoons first came into common usage? If you said “a long time ago,” you’d be correct. Their origins probably occurred in many places and about the same time because they are pretty simple and a very useful tool. Archaeologists found crude spoon-like devices among Neanderthal fossils dating back to the time before their species died out, about 30,000 years ago.

It’s easy to imagine a seashell or freshwater mussel shell becoming a spoon. The shell became the head (or bowl) of the spoon held between two fingers. And then someone thought of wedging a shell in a sling-shot fork of a twig creating a handle. The time span from a solo shell to attaching a handle may have been a thousand years or more.

Spoons found among other human cultures’ fossils had handles tied to small animal bones, such as a scapula or thigh bone. In the time between the oldest spoons found and ones that look like what we use today got a boost from religious Egyptians. They ornately decorated their bowls and handles. Spoons became important players in other religious ceremonies. The connotations of spoons varied in meanings ranging from a simple eating tool to wild imagining with unbelievable psychological/religious powers.

The remnants of ancient spoons that look much more like ours today were made in Egypt about 2,000 years ago. They were embellished with ivory, slate, gold and other precious or semi-precious materials. Since then, the spoon has played a major role in nearly every food culture in the world in one way or another. In some cultures, however, the spoon was not accepted except as a sin, but that’s another story.

Like with every human endeavor, someone gets the bug to modify an invention, thinking their work will make the original design bigger and better… or not. Look in your kitchen drawer or on your implement peg-board to see examples of changes. Although spoons have been in use for many thousands of years, the first standardized measuring spoon was invented in 1896 by the director of the Boston Cooking School, Fannie Farmer. Measuring spoons, for instance, usually range from four to six sizes: 1/8 teaspoon, 1/4 teaspoon, 1/2 teaspoon, 1 teaspoon and 1 tablespoon. Cheaper sets will omit the 1/8 teaspoon. Around that same time the tea-spoon, dessert-spoon and tablespoon first appeared. The tablespoon was destined for eating soup. The 18th century witnessed a proliferation of different sorts of spoons, including the mustard spoon, bouillon spoon, coffee spoon and, one of my favorites, the salt spoon. On holidays, my grandmother set a table for 10 with a thumb-sized glass bowls of salt at each place with its own tiny salt spoon.

This little history gives you an idea of the evolution of spoons since a bone or seashell was wedged or tied to a twig and the diverse types of spoons available today.