In the Spotlight: Kent Driscoll, by Tim Huffman 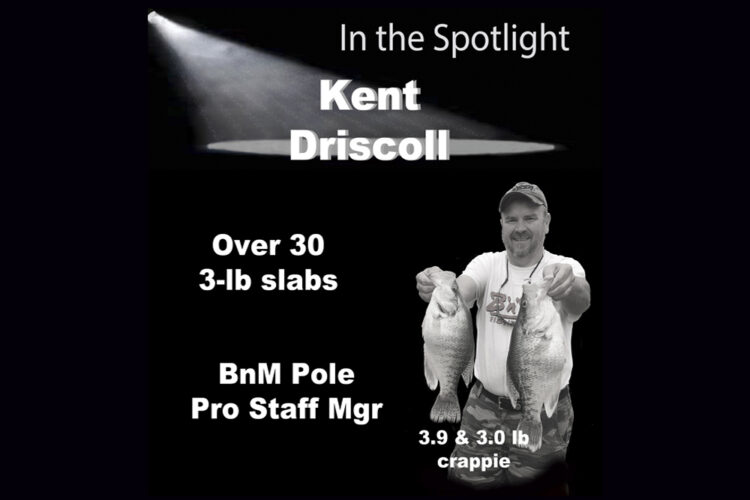 Kent Driscoll is a major player in the sport of crappie fishing.

If you follow the crappie fishing “network,” it is very likely you have heard the name, “Kent Driscoll.”

Driscoll, born in 1967, lives in Nolensville, Tennessee near his home lake of J. Percy Priest. His real job is as Vice President of National Sales at Athens Distributing in Nashville. He is also Pro Staff Manager for BnM Pole Company. He is pro staff for War Eagle Boat, Driftmaster, Gamma Line, Crappie Magnet and Silent Stalker. He is on the board of directors for Legends of the Outdoors Hall of Fame.

Driscoll’s crappie tournament fishing started in 1999 and he has fished every major circuit. He won three Magnolia Crappie Club championships, won tournaments with the Southern Crappie Association including the 2006 Championship that paid a new War Eagle Boat. He and partner John Harrison finishing 19th in the American Crappie Club Classic Championship at Sardis Lake in June.

When did you start fishing?

“I was about eight years old when I started spending my summers with my grandma. We went fishing every Monday through Friday for three months. She had access to around 50 private ponds. Before each trip, I got to choose if we fished for bass, catfish, crappie or bream. I usually chose crappie. It was my job to have everything ready for the next morning. I cleaned fish each day and buried the remains in the garden for fertilizer.”

You’re known to be a fisherman who goes for big crappie. How many three-pounders have you caught?
“Over 30. Most came from Arklabutla and Grenada. My biggest is 3.9.”

“Now that I’m in Tennessee, I spend a lot of time fishing brushpiles and boat docks with slip-corks at Percy Priest. Water is so clear here that I have to stay 20 or 25 feet away from the fish. However, it’s not unusual to catch 15 to 20 from a brushpile. I start by using LiveScope to check out the brushpile, then use SpotLock to anchor the boat and pitch the float upwind so it will float to the brushpile or stakebed. It’s a simple method and lots of fun. I still like seeing a float disappear.”

You mentioned LiveScope. What’s your opinion?

“I’m very divided on my thoughts about it. I sometimes feel it’s like spotlighting deer. The positive is that it has revolutionized crappie tournament fishing. A fisherman doesn’t waste time any more fishing a spot with no fish. And, he can target just big fish. After finding a big crappie, he can chase it down if it runs. A fisherman can learn from it, too, by studying what fish do. We’ve learned crappie are a lot more spooky than we once thought.
“It’s too soon to know yet if it will hurt our big fish populations. It allows a fisherman to be more efficient and to target big fish. The top five teams at the ACT Classic this June were using it. So, from a conservation standpoint, I hope it doesn’t hurt the big crappie populations in our lakes as more people learn to use it. I hope the good fisherman will take a picture of the big ones and release them back into the water. It’s more important now than ever.”

You can only have two baits in your boat for the next year. What will they be?
“I’ll have a pink Fin Spin head with a chartreuse and blue Crappie Magnet bait. My second bait will be a live minnow.”

“Pre-planning for tournaments. That involves internet searches, Google maps, previous tournament results and referring to a logbook I always keep. My second is being able to fish a lot of techniques. I can shoot docks, power troll and most other techniques so I can quickly adapt to any condition. Another is simply a passion for the sport. I don’t mind putting in hours to do homework, put out brushpiles and go around the lake in the winter when the water is down and GPS spots. I love the sport.”

“I work a full-time job so I’m basically a weekend fisherman. I don’t have the time I need to prefish for most tournaments like many of the other competitors.”

“I’ll just say that anglers need to show respect for other anglers. I go extra lengths to get away from fishermen so I won’t crowd others or be crowded by them.”

American hero? “John Wayne.”
Fishing hero? “KVD. Successful, dedicated and ambassador for his sport.”
Boat food? “Sandwich, bag of chips and Mt. Dew.”
Favorite teams? “Tennessee Titans, Dallas Cowboys and anything Ole Miss.”
Movie, book and music? “3:10 to Yuma; Time to Kill; U2.”
Something we don’t know about you? “I was born in Naples, Italy.”

“As a good ambassador for the sport of crappie fishing.”