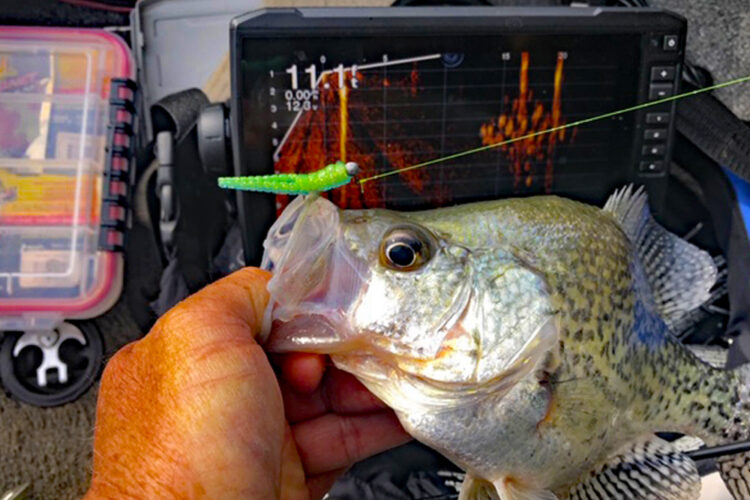 With a LiveScope peering beneath a boat dock, you can almost count the number of crappie gathered around the dock pilings. Of course, that doesn’t mean they will all bite like this one did. (Photo: Richard Simms)

Charlie Rogers, 76, marvels at how far crappie fishing has come in his lifetime.

He got his start in tournament fishing with his son Kevin by just tying to a tree on Truman Lake and using minnows to catch whatever would swim by.

“We didn’t have electronics, not even a flasher unit,” said Rogers, who lives in Peculiar, Mo. “We were just fishing on a hunch.”

Now the father-son team uses the latest technology, the Garmin Panoptix LiveScope, to get a real-time look at what the fish below their boat are doing. The unit features live tracking of how crappies relate to baits dropped in front of them, how they react to sounds, how they relate to cover, and how they school.
For old-school fishermen such as Rogers, long considered one of the top tournament crappie fishermen in the country, LiveScope confirms some long-held beliefs…and disproves some as well.

“It’s amazing the things we’re learning about their behavior,” Rogers said. “For crappie fishermen, it’s the greatest educational tool to come along.”
Rogers certainly isn’t alone in that thought. Since it was introduced in 2018, LiveScope has taken the crappie-fishing world by storm.
In the process, it has educated many fishermen about what it takes to get a crappie to bite—and also why they won’t.

To many, the screen of the LiveScope is similar to an interactive video game.

Fishermen can pull up to a flooded brush pile or tree, and the screen comes alive with moving parts. Icons of crappies moving around the cover fill the screen, and fishermen can even pick out the bigger fish they want to target. They can watch their bait descend and they can stop it right in front a fish’s face.

Sometimes that crappie will just eye the bait, then turn and lazily swim away. Other times, if the fisherman works the jig too vigorously, the fish will spook and disappear.

“Over the years, we’ve preached that crappies will always feed looking up,” Rogers said. “But with LiveScope, we’ve seen that’s not always the case.
“We’ve seen times when we’ll just slowly lower a bait after it’s been in front of them and they’ll go down to get it.”
Other discoveries?

There often are more fish down there than fishermen believe.

“I think sometimes they’re just down there laying in the mud,” Rogers said. “Conditions change, like the sun coming out, and it triggers them. You can just see them rise up and get active.”

Todd Huckabee, a well-known guide in Oklahoma who give seminars throughout the Midwest, also has seen days when the crappies show up in force.

“There are way, way, way more crappies down there than we ever believed,” Huckabee said. “We only get bit by a small percentage of what’s down there. The other day, I fished an off-shore laydown that was maybe 25 feet long and it was just covered with fish.”

Huckabee and his clients caught plenty of crappies without leaving that spot. But it took some changes. They started with Beaver Bottom plastic baits and caught the easy ones. When the action slowed but the LiveScope showed the fish were still there, they went to hair jigs, then minnows to catch the crappies.

“When we started, the crappies were up in the branches,” Huckabee said. “Once they started getting some pressure, they moved deeper into the cover. But the point is, they were still there. We just had to show them some new things to get them to bite.”

Steve Pennaz, a member of Garmin’s pro staff who is in the National Freshwater Fishing Hall of Fame, also knows that LiveScope can reveal the picky nature of the crappies.

“I have seen crappies rush up to a bait, and get inches away from it and then slowly back away,” said Pennaz, who lives in a suburb of the Twin Cities. “One time, I dropped down on a fish three times and couldn’t get it to hit. I switched colors and dropped it back down, and that fish immediately hit.”

Through LiveScope, Pennaz is convinced there are two populations of crappies – one that relates to cover, another that roams open water.
“In late summer, I’ve seen huge schools of crappies in deep holes,” he said. “You can literally chase them down with LiveScope.”

How well those fish bite can differ by the day. Pennaz, who is known for his ice-fishing prowess, is amazed at the change in the fish’s moods.
“Some days, they’ll scatter when I drill through the ice,” he said. “Other times, you could run a motorcycle race over the top of them and they’d still stay put.”
Huckabee also has used LiveScope to gauge the crappies’ reaction to mistakes fishermen make.

“They definitely react to sound,” he said. “If you come in too ‘hot,’ you can see them just scatter. The big fish spook very easily. It can be something as subtle as a squeak in your seat or a livewell kicking on. You want to just glide into a spot to have your best chance of not scattering them.”
Similarly, Huckabee has seen times when too much action on a jig can alert the crappies that something isn’t right.

“If you have a real big jigging motion, the bigger fish usually back away,” Huckabee said. “They are like deer. They know when something is out of place in their world. It doesn’t look natural. “But if you drop that bait down right in front of their face and make slight movements, that’s when they’ll hit.”

There is little doubt that LiveScope has revolutionized the game of crappie fishing. Some old-school fishermen even worry that it gives techies too much of an advantage and that the increased harvest may hurt crappie populations.

But many who use LiveScope always come back with one response. The electronic device can help locate the crappies, but it can’t make them bite.
“I’ve seen times when a crappie will just come screaming off the bottom and then just stop once it gets the bait and just drift away,” Pennaz said. “Other times, you can have it right in front of their face and they’ll just ignore it. There are still days when they just don’t want to hit.”

Like any kind of electronics, there is a learning curve in setting up the complicated electronics properly, and then interpreting what you are seeing on the screen. Don’t expect to waltz onto the lake on day one and expect miracles to happen. But most say the learning curve on LiveScopes are shorter than other varieties of electronics and are especially versatile for crappie anglers. So far it seems to be crappie fishermen who are taking the greatest advantage of LiveScopes. Other anglers such as bass fishermen and catfishermen are experimenting, but so far not sharing the same rave reviews as the crappie anglers are.

The LiveScope electronic box and transducer costs around $1,500, depending upon where you buy. That does NOT include the actual depth finder the LiveScope attaches too. Those can range from about $600 up to $10,000-plus. Generally, you should plan on spending at least $2,500 to dip your toe into the LiveScope waters. It’s not cheap but if it follows the track of other high-end fishing electronics, prices MIGHT come down in a few years. Of course, that’s assuming someone doesn’t invent something even better before then.

(Brent Frazee was the outdoors editor for the Kansas City Star for 36 years before retiring. During that time, he won more than 50 state, regional and national awards for his writing and photography. He received a lifetime achievement award from the Outdoor Writers Association of America in 2014, and was inducted into the Waterfowlers Hall of Fame in 2015. He lives on a beautiful lake in Parkville, Mo., with his wife Jana and his chocolate Lab, Zoey.)