In the Spotlight: Robert Carlile, by Tim Huffman 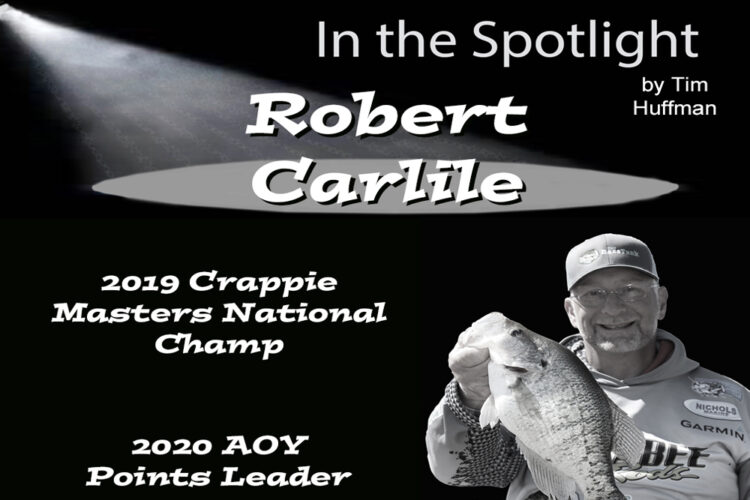 Robert Carlile was born in 1969, is married with one daughter and owns a machine shop in Oklahoma. He calls Hudson and Ft. Gibson Lakes his home waters, but fishes all over the country competing in tournaments. He is in his second full year of competitive fishing, but has more top ten finishes than many seasoned tournament competitors and he is determined to win more.

How did you get into crappie fishing?

“I grew up fishing and spent a lot of time on the water when I was 16 until 21, but gradually got away from fishing. A few years ago, I got burned out on other stuff I’ve been doing for years so in 2017 I decided to get back in it. I bought a boat and started fishing, expecting to fish for walleye and crappie. I started fishing crappie tournaments halfway through the 2018 season and liked them. I love the competition.”

You’ve had a lot of top finishes so far?

“I’ve probably been in the top ten in 90-percent of the tournaments. My partner, Craig Nichols, and I won the 2019 Crappie Masters Classic Championship. I’ve had a few other wins.”

You’re known as a LiveScope expert. Is that your fishing strength?

“First is a good work ethic. Success and hard work usually go hand-in-hand. My second, and the most important, is the mental side of fishing. I learned through a competitive shooting career that mental preparedness, dealing with pressure and building self-confidence is critical to success. I just apply that to fishing.”

“That’s difficult because when I identify a weakness, I make it a goal to do something about it. For example, a year ago I learned I had a weakness for catching black crappie in clear water when I fished in Wally Marshall’s tournament. I identify weaknesses and improve in those areas.”

You were into the Garmin LiveScope early. Is it really a game changer?

“It’s the current best thing going and we are still learning things with it all the time. It allows us to experiment and learn quicker. We are still waiting on one of the trolling teams to perfect a totally new technique using it with multiple poles. There is an advantage with multiple poles and someone will figure it out.

“Right now, I’m casting a lot just so I’ll spook fewer fish. I could pitch using a 16 pole with 16 feet of line to get out 32 feet, but the longer pole takes so much leverage. When I catch a 100 pounds of fish in a day using a long pole, it hurts my shoulder. I believe it strains the body when fishing with it all day long, but younger fishermen can get more aggressive and power fish. So, I pitch with a standard-length pole and I cast with a seven-foot rod.

“We are two years away from tweaking everything we can out of LiveScope. We are still chasing technology that’s already here.”

“I’m truly working toward a full-time career in the fishing industry. I’m guessing that will probably include guiding, but I’m looking for retirement options in the future.

“I’m going to say Grenada (Mississippi), probably most people’s standard answer, just because of the quality and size of fish.”

“I’ve enjoyed watching Kevin Rogers because he gives a positive public image, doesn’t say anything bad about people in public, promotes his sponsors and supports fishing.”

“No. I have a one-track mind…crappie fishing. No hobbies, work and fishing, both of which are hard work.”

“I have a one-track mind… crappie fishing.” ~ Robert Carlile

“Jet skis and people on the lake who don’t show common courtesy to others.”

“No fishing superstitions. I’ll even eat a banana in the boat.”

Something people don’t know about you?

“As somebody honest with a good work ethic.”