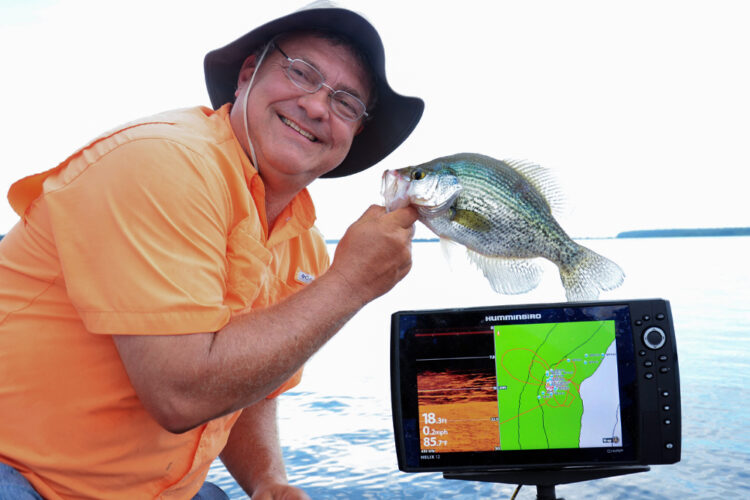 Good sonar units can make the difference between fish in the boat and just a boat ride. (Photo: John Phillips)

Of all the tools used by crappie anglers, probably no other modern development has made more fish come over the side of the boat than sonar fish finders. These amazing little black boxes can help anglers find crappie that would otherwise be completely passed over. These electronic marvels show the angler what lies below the surface with remarkable detail and clarity.

Help from an Expert

Tony Adams fishes for crappie a lot both as a guide and for his own enjoyment in the lakes of eastern Alabama. A vital part of his crappie fishing success comes from his use of technology- the sonar fish finder.

Adams says, “My best advice to anyone wanting to use electronics to catch more crappie is to invest in a quality product with good imaging. I highly recommend Humminbird products, especially the Helix 12.”

Of course, the latest craze among hardcore crappie anglers is the Garmin Panoptix LiveScope outlined in another article in this issue [HOTLINK TO FRAZEE LIVESCOPE ARTICLE]. Lowrance also offers many comparable units to the Helix as well as their version of the Garmin LiveScope called Livesight.

Adams says, “I’m using the Helix12 and I find it’s great for locating crappie. It has a large 12-inch screen that’s easy to see. It is hard to see crappie on the small screens.”

The Helix 12 is almost as expensive as the Garmin LiveScope, depending upon the whistles and bells you include. However smaller Helix units, such as the Helix 7, are available for just a few hundred dollars.

“The Helix has great side-imaging which helps to find the structure and the crappie. After finding the structure, I use the down-imaging to get a better look at the fish. The Helix 12 has all the features you will need to find crappie, and I often use the mapping and boat navigation features of the unit.  The only feature I pass on is the 360 imaging, but others may find that feature handy.”

Anglers often find that the settings of any fish finder unit out of the box may not be the optimum for finding crappie. Some units can be more difficult to adjust, and anglers need to investigate the ease of making setting changes before purchase.

By making changes to suit particular anglers and waters, crappie anglers can maximize the performance of any sonar fish finder.

How He Uses the Unit

Crappie anglers searching for the best concentrations of crappie need to know what they’re looking for. It’s a busy world down under the surface of the water, and there are lots of things which can confuse both a fish finder and an angler.  It takes some time and experience to fully understand or interpret exactly what the screen is showing, and most crappie anglers new to the sonar game experience some confusion at the start.

My best advice to anyone wanting to use electronics to catch more
crappie is to invest in a quality product with good imaging.

Adams says, “When searching for good crappie concentrations, I look for clusters of dots or specks on the screen gathered in and around the structure.  After finding the structure with side imaging, I go to down imaging for a better look at the depth of the fish.”

Crappie themselves will often show a stronger, definite return image, and most of the time, there will be several individual returns. Crappie, after all, are schooling fish.

And quite often smart anglers won’t look only for the crappie.  Finding baitfish is crucial in finding crappie. Crappie will follow school of shad and other smaller baitfish, and when bait is found, the crappie will be close.  But finding bait is not as easy- the individual shad for example are small and give a poor individual sonar return. But put those little shad in a big school, and there is something for the sonar to read. Adams says, “Bait fish will look like clouds and will not be as defined as the crappie.”

But when an angler finds a “cloud” return on the screen with stronger, larger “dots” around, this is a spot which demands fishing attention. When crappie are closing associated with the “cloud” of bait, they are usually feeding actively, and a bait or lure dropped to them will usually get results.

Finding structure is key with fish finder use for crappie. The structure is what holds the bait and the bait is what attract the big crappie. Adams adds, “On the structure, I look for trees, stumps, humps and ledges.  That’s one reason I really like using this Humminbird unit.  You will see definition of the structure with the crappie in and around it.”

(Ed Mashburn is a retired school teacher, outdoor writer and photographer. He lives in southern Alabama, but he fishes for anything – carp and trout in Arizona, smallmouth bass and crappie in Wisconsin to snook and snapper in the Florida Keys.)