Can We Have Too Much Technology?, by Jim Mize 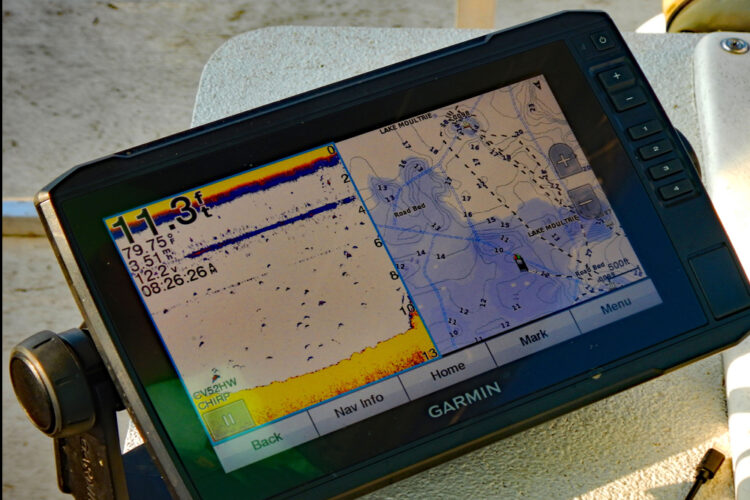 Advances in technology continue to aid fishermen in finding structure and fish. Some wonder if we can have too much technology. (Photo: Jim Mize)

Can We Have Too Much Technology?

Steve English is a third-generation fishing guide and spends most days taking crappie and bass fishermen out on the Santee Cooper lakes in South Carolina.  Having fished and guided on the lakes most of his life, he has seen the changes over the years first-hand and some concern him.

“Technology increases exponentially,” says English. “It’s getting so good that people with a little experience can find a brushpile and catch fish.”

As an example, we discussed the progression from the early flashing sonar units, up through the vertical and side-scanning sonar units. And the latest rage among crappie anglers, Garmin LiveScope technology. In fact, if you want, you can go the next step and drop a camera down to actually watch the fish.

English adds that technology will remain popular with fishermen so it’s not going to stop progressing. Neither the fishermen nor the companies developing this technology want it to. Becoming more effective as fishermen is something most of us strive for.

And it seems there are more people on the water, especially in a year when social distancing encourages time spent outdoors.

English expresses concern over having more people on the water with ever better technology. Basically, he wonders if our effectiveness as fishermen combined with our numbers will impact the fishery.

He adds that this isn’t just a crappie issue or an issue on his lakes. His concern is broader and he hears similar comments from fishermen in other states about different species of fish.

“But crappie are not a catch and release fish,” says English. “They are good to eat and legal crappies usually end up in the freezer.

Levi Kaczka is the Coordinator – Region IV Fisheries for the South Carolina Department of Natural Resources.  When I posed the question to him regarding technology and fishing pressure, we immediately began discussing data.

“Creel surveys (which measure fishing success) on lakes the size of the Santee Cooper fishery are expensive,” says Levi. “You have to cover both public and private ramps for weeks or months to get good data.”

Are we headed into a collision between technology, fishing pressure, and our crappie fishery?

With the size of the two lakes and the number of boat landings, he explains that the cost of a creel survey that provides accurate data exceeds their resources.

As a result, he says data regarding the impact of technology just doesn’t exist.  The last time a creel survey was conducted on Santee Cooper lakes was more than ten years ago.

Likewise, data from earlier fishing generations is not available.  This is especially true for data on crappie.

Most of their data on crappie comes from studies targeting other fish.

“We do catch crappie in our gill netting and spring electro-fishing studies,” explains Levi.

When they do, they use the catch to look at age classes and growth rates. He describes the information he has as generally positive.

“Our recent numbers are solid; the age class diversity is good as are the growth rates. We have high growth rates and the current eight-inch size limit seems to be doing its job in keeping a good spawning population.”

“We’ve aged fish up to eight years old from the lake over the past two years, and have not observed any missing year classes from the last eight years. This is a positive sign that crappie are not only remaining in the lake long enough to spawn, but some of those fish are reaching older, larger sizes, which adds a trophy component to the fishery.”

But he adds that fisheries scientists across the region all want more data on crappie. He has a field study planned for crappie in the region in coming years to boost their dataset.

“A study specific to crappie would provide more data on juvenile fish and allow for an earlier determination of strong or weak year classes,” says Levi.

When I raised the issue of the impact of technology, we came back to the data issue. He agreed the continued improvements probably help fishermen, but said there is just no way to know if, or how, it impacts the fishery.

Asked what he would like to see in the meantime, English said, “Let’s start the conversation. Crappie fishing is fun and we should promote it as fun. It’s not about keeping all the crappie you catch. Make your limit what you need for a meal.”

Other anglers, such as trout fishermen and bass fishermen, routinely practice catch and release. More and more catfishermen are releasing their large fish and keeping the smaller ones for the pan. This results in retaining strong populations of spawning fish in the water.

“I don’t have all the answers,” said English, “But I do feel like we’ll have a problem if we don’t address it.”

(Jim Mize is an award-winning outdoor writer whose work has appeared in Gray’s Sporting Journal, South Carolina Wildlife Magazine, In-Fisherman, and many other publications.  His award-winning books of outdoor humor and nostalgia are available at http://www.acreektricklesthroughit.com)