Catching Weiss Crappie from December to March, by Tim Huffman 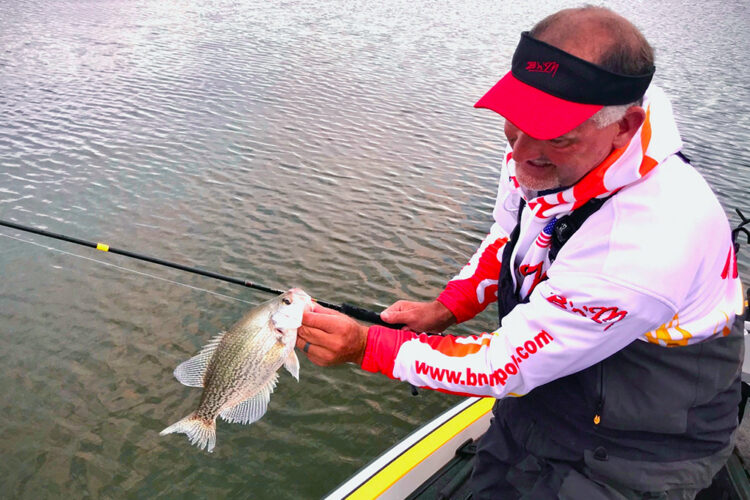 Weiss Lake guide Carlton Teague says taking crappie on a spinning rod and reel, whether casting or pulling, is a fun way to feel a tug on the line and get to fight the fish to the boat.

Weiss Lake, the Crappie Capital of the World, is primed and ready for a great, new fishing season starting right now. Local guide and a National Classic Champion, Carlton Teague, shares seasonal tips to help you be successful there.

“Weiss is a great destination for people to come and fish,” says Teague, “and due to the Covid virus, 2020 has not had the out-of-town fishing pressure on it. This fall the fishing has been great and it should be a good in 2021 with plenty of good fish, probably more than in previous years.”

December and January fishing can be similar in a year with normal, consistent weather. At Weiss, expect fish to be suspended in tributaries and along the main channels.

“Weiss is predominately a white crappie lake,” says Teague. “I find the fish by using my electronics. I start along a channel ledge looking for baitfish. Bait is a key ingredient in the winter, and usually in other seasons, too, but especially the winter. I use Humminbird electronics with Side Imaging being important for scanning areas and then I use a 360 unit on the front. If baitfish are not moving and there’s very little or no current, which is normal at low winter pool levels, I like to push out the front, also call spider rigging.”

Spider rigging, or slow trolling, is a well-known technique for using multiple poles and baits out of the front of the boat. Teague’s equipment includes 14-foot BGJP BnM poles and Driftmaster holders. Baits are varied with Big Bite 2-inch Crappie MinnR in Firecracker color being one of his top picks for spider rigging.

“I like spider rigging but also like to pull. Water temperatures may be in the 40’s, but the fish will still bite a jig pulled through the water. The key is “slow”.

Fishermen have a tendency to use baits that are a little too big for cold water. I like a 1/24th and to get it to the desired depths, I’ll add a 3/0 split-shot. The weight can be adjusted to get down to 10 to 14 feet when using slow speeds. The fish will load-up the rod so a snap of the wrist is needed to set the hook. For pulling, Charlie Brewer Sliders and tiny hair jigs catch me a lot of fish.”

“Fish will start pulling back into the tributaries,” says Teague. “The main arms, like Little River, Yellow Creek and Bay Springs, will have baitfish moving up as waters warm. Weiss is a shallow lake and requires careful navigation, but being a shallow lake, it warms quickly and the crappie come up in the water. I target them by pulling because it covers more water to find fish when they scatter. On good days, a fisherman might find fish holding on a small drop where they can stay all day.

“Water temperatures may be up in the 50s but that’s still cold, so I never get over 0.7 mph when pulling. Baitfish are still a huge factor. I like tight baitfish balls but it’s okay if the school is spread out just a little. I look on my sonar for crappie tending to stack up. It’s a good time of year to catch fish.”

Teague says March is the normal spawn month on the lake. Shallow water areas will have fish moving into them. There’s a lot of natural stumps and manmade cover for the fish to pull into in the five to six-foot range. They may be on a shallow flat or along the shoreline.

“I love to find fish along the shoreline stumps and throw a weighted float or a slip-cork. This time of year, I want a Big Bite black and blue grub tipped with a chartreuse Nibble.

“A great thing about this lake is a visiting fisherman can come here and catch fish. I believe that’s the reason this has been such a great tourism spot for decades. The business people here cater to tourist and are quick to help a fisherman be successful because they want them to have a good time and come back to do it again. Our economics has been hurt by the Covid, but I’m hoping things get better in 2021 because people have learned how to better cope with the virus problem. The fishing should be great.”

“I recommend that fishermen keep an open mind. Don’t just be docks shooters or channel fishermen, keep an open mind and be versatile in your fishing. Nine time out of ten, the tributaries I mentioned earlier will have fish in them. Just figure them out and fish a method to catch them.”

Contact Carlton Teague at 256-643-5437. Check out lake and area information at Cherokee-Chamber.org.