Plastic VS Hair, by Ed Mashburn 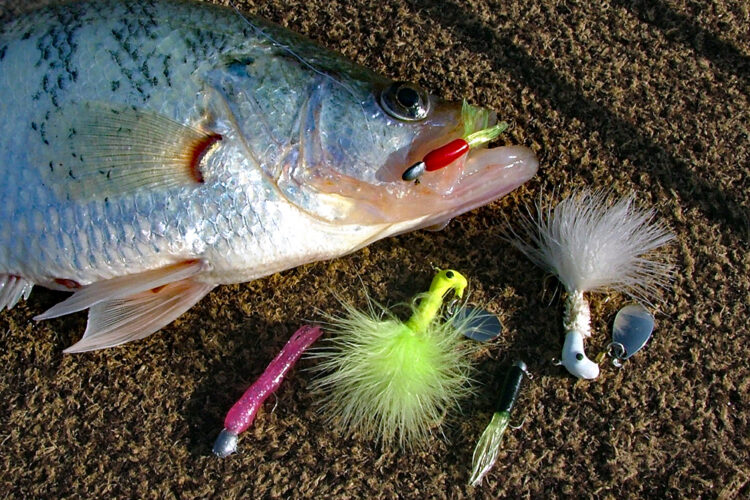 Plastic bodies for crappie jigs are all the rage these days, however, many anglers still believe that hair jigs (or feathers) are the only way to go. (Photo: Richard Simms)

There are many choices in this world. Some folks like thin-crust pizza, and some like thick.  Some like smooth peanut butter, and some won’t eat anything but chunky. And in the world of crappie fishing, there are choices to be made when it comes to selecting crappie jigs – plastic or hair (or feathers). So, which is best?

Long-time Tennessee River crappie guide Brad Whitehead said, “There’s a 100 percent difference in the movement of hair jigs and plastic body jigs. Plastic just doesn’t move as much. Hair- either natural or synthetic- is more flowing in the water while plastic is more stable.”

Whitehead demonstrated, dropping two jigs – one hair body and one plastic in a swimming pool.

He says, “The hair jig can be moved a lot slower and still have much more movement (action) than plastic.”

He says he often lets the crappie decide for him but often finds situations when they prefer a more deliberate and slow-paced presentation and hair jigs are the best call.

Using scent as a bite incentive is often a big part of many crappie anglers’ techniques. It appears there is a big difference between the two jig body materials when it comes to taking and holding an added scent.

However, Gill Reaper Lures say it has created an alternative to that with its “Eye Hole Jigs” where anglers can actually embed a crappie scent nugget into the jig.

Other than that, when scent seems to making a difference, again a hair jig might be the best idea.

Whitehead has definite preferences when it comes to color selection and body type for his crappie jig set ups.

“When the water is stained or muddy, I use lighter colors with a hair jig. I like lime and chartreuse. As the water clears, I use jigs in shad colors with plastic bodies.

He says in most places, in early spring, the water will be colored, so the hair jigs work best.

As the season moves on and the water clears, more natural colored plastics will work better.”

When asked if it might be a good idea to use both types of bodies on a single jig, Whitehead’s response was quick. “Yes, sir! I will put a plastic jig body on a hair jig. This gives a bigger profile for use in dingy water.”

Personally, I often double up, using a couple of 1/24 or 1/32 oz. jig heads about 18 inches apart on my line – one will be a hair jig while the other is rigged with a plastic body.

There are a lot of choices for crappie anglers to make when it comes to choosing what they will put before the crappie.

I seem to catch bigger crappie on this double rig. I don’t know if the crappie think it’s a small school of bait or if they just can see and find the jigs easier, but doubling up often seems to work well for me. I can cover a lot of water with this technique, and by using two jigs, I can sometimes determine what the crappie prefer on particular days.

Whitehead said, “I use hair jigs in colder water than I use plastic.  Hair jigs work better in winter months when I slow-troll open water.  The hair jig moves more on a slow troll, and with scent added and holding in the hair, it’s a great combination.”

(Ed Mashburn is a retired public school teacher, outdoor writer and photographer. He lives in southern Alabama, but he fishes for anything – carp and trout in Arizona, smallmouth bass and crappie in Wisconsin to snook and snapper in the Florida Keys.)