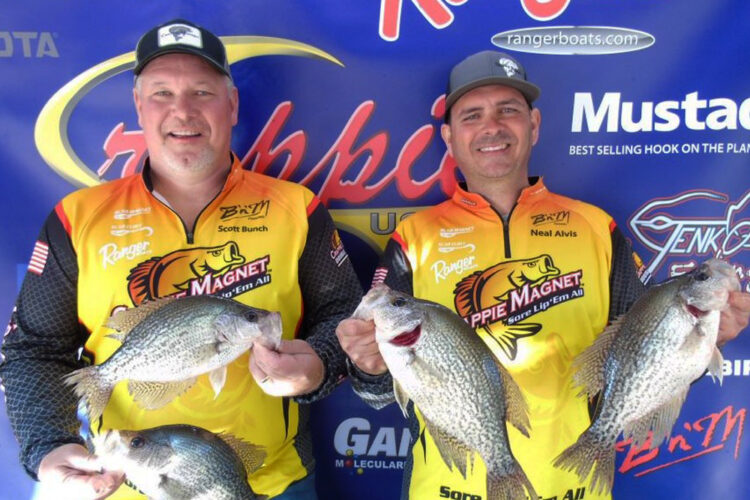 Successful tournament crappie fishing depends heavily on pre-fishing and doing your homework on the waters you are going to fish. Scott Bunch and Neal Alvis have followed that reasoning to develop their winning ways when it comes to crappie fishing.

Bunch and Alvis won the 2020 Crappie USA points race by consistently performing well on different bodies of water throughout the year, including the 2020 CUSA Classic on Green River Lake, KY.

The Angler Team of the Year (AOY) is not about a single win, but the journey. It requires consistent performance under all kinds of conditions. Consistency wins out over total numbers.

In the CUSA points race, the champions are determined by their best five finishes during the season plus the championship. So, in the end, it doesn’t matter how many tournaments are fished, but how well anglers perform in their best six events.

Bunch and Alvis’s consistency comes from starting each year with a plan that includes picking their battles and beginning with the end in mind. Their plan works well for tournament anglers or recreational anglers wanting to catch more crappies.

“At the beginning of the year, we sit down and figure out which tournaments best suits our fishing style,” explained Alvis. “We typically like to fish for black crappie because they relate to structure or docks so we like to fish bodies of water with those characteristics.”

“Beginning with the end in mind, means that when we do our scouting, we are preparing to make the best of the time that we will have on the water,” added Alvis.

As typical single pole anglers, Bunch and Alvis enjoy targeting fish on structure, under docks, and along ledges. Whether it’s fishing vertically, casting, or shooting docks, they have adopted Garmin LiveScope as an important part of their strategy. By keeping the end in mind, they eliminate unproductive structure and docks as they pre-fish.

This new technique has changed the crappie fishing scene. For tournament anglers, Garmin LiveScope helps them target the larger fish needed for consistent tourney success. For recreational anglers, it helps them find and catch more crappie for the dinner table.

“We use two LiveScopes in our boat,” Alvis said. “By having our own we can cover a wider area when searching for fish.”

As far as rigging, their go-to setup is a single jig head with Crappie Magnet or Slab Magnet bodies, fished on B’n’M poles. Colors and sizes are subject to conditions but they normally tip with Slab Bites.

Weekend warriors and tournament anglers understand the challenge of crowded waters and overfished structure. Such was the case at Kentucky’s Green River Lake for the Classic.

“Having 120-plus boats on a 9,000-acre lake for a week of pre-fishing makes for a challenging day,” offered Bunch. “A lot of the structure, especially the man-made structure, really gets hammered.”

Finding these conditions, Bunch and Alvis look for new natural structure and find areas that most anglers wouldn’t target. This is where LiveScope comes into play.

“We also use LiveScope to compare the size of the fish on structure,” continued Alvis. “We are able to find more structure with LiveScope as compared to traditional side imaging sonar.”

“The LiveScope transducer actually sees in front of you,” explained Bunch. “Instead of having to get over the top of the fish, we are able to present the Crappie Magnets from a distance without spooking the crappies.”

“We keep the field of view at two feet off the bottom and the forward view at around 30 feet,” continued Bunch. “These settings allow us to fish the structure and make a better presentation to the fish by keeping it in the strike zone longer.”

With or without using LiveScope, bait is important too. But with LiveScope anglers can find bait just like they find fish. And that helps them select the profile of the bait they tie on the line.

“In the spring and fall when fish are really feeding up, the baitfish can be pretty good size,” Bunch said. “So, anglers may elect to go with a bigger bait like the Slab Magnet.”

Once the target is found, an angler is just one cast away from a slab on the line. Bunch says he favors using B’n’M’s 8-foot Russ Bailey rod or the Buck’s Gold Jig Pole in the 10-foot length.

“I like a rod in the 8 to 10-foot range,” explained Bunch. “I use it to control the rate of fall of the pitch, not necessarily for the jig head size. I can also see if my cast is long and bring it closer by just raising the tip.”

Using Green River Lake as an example, Bunch explained how he would transition from October techniques into December when the water is colder.

“A lot of times when fishing structure the fish are more active in the fall than they are in the colder part of winter,” explained Bunch. “When the fish are lethargic as they sometimes get in really cold water, we will often use a smaller size bait.”

Savvy anglers understand that in the winter the crappies usually relate to the bottom on ledges and near structure in deep water. With LiveScope they can vertically jig the winter bite near the deep structure and actually see the fish rise to bite the lure or bait.

“Green River is an awesome lake,” concluded Bunch. “Certain areas of the lake are absolutely full of keeper size fish. We would still single pole structure in December, but at different depths. Some of the major creek areas and river channels on either end of the lake should be really good in the winter months and there will be considerably less fishing pressure.”

These two anglers fish with a mission to succeed and everything they do along the way contributes to the outcome. They listen to others who have been there before and they learn from their mistakes. True champions are wiser at the end of the journey because they paid attention along the way to achieving their goal.

Bunch and Alvis are sponsored by Crappie Magnet and Safehouse Ministries. They are also affiliated with B’n’M Poles.