Get Out of the Rut 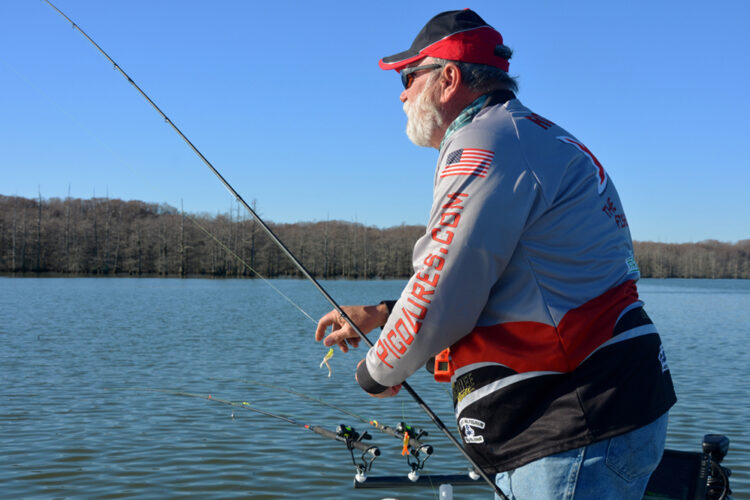 Greg Robinson reads the water and his electronics to figure out tactics.

A rut can manifest itself in a myriad of ways: relationships, careers, lifestyles, depression. Then there is the fishing rut, that seemingly prolonged drought between the expenditure of your efforts and your expectations. You have always caught fish doing precisely what you are doing – until now.

Countless self-help tutorials are available about how to break out of a rut. Most of us think, if we just keep plugging away at the tried and true, our luck will change. Right?

“It made all the difference in the world by changing up the profile until I got it right. Where I was only catching two to three off a brush pile, I was now catching 15-20 off of them.” – Brad Chappell

Fish don’t read the same books or “how-to “articles we anglers read. Take some risks and change your behavior and your tactics. Your changes don’t always have to be on a grand scale. Sometimes, a tweak is all that’s needed. What is there to lose? You are not catching any fish anyway.

“I believe a lot of people put in their mind the fish just aren’t biting and settle for that,” Chappell said. “I like to spend time looking at my electronics and try to figure what’s going on in the water. You hear the phrase, ‘Find the bait and the fish will be there.’ I agree with that statement to a degree.

“If I locate an area with big schools of baitfish scattered in the water, it kind of tells me that shad aren’t scared and are just swimming around. If I find an area where the shad balls are grouped up tight, it tells me that shad are in fear, so something is probably eating them. It shows this a feeding area. I’m going to fish this spot and not the other spot.”

Chappell shared a specific example from last summer when he was fishing Mississippi’s Ross Barnett Reservoir. He explains it was one of those typical August “dog days.”

“The bite got slow, so I tried pulling crank baits, which is extremely effective in the summer,” Chappell says. “I would catch a few crappie but knew there was probably a better way to catch more. The fish were loaded on stumps and brush piles on the edge of the river channel. I tried casting Baby Shads and would pick up a few but after catching two or three off each brush pile they would shut off.”

“I tried the Bobby Garland Itty Bitty. It’s only a 1.25-inch bait with a 1/48-ounce jig head,” he explains. “I think the fish really weren’t aggressive, but they couldn’t turn down this smaller profile bait. It made all the difference in the world by changing up the profile until I got it right. Where I was only catching two to three off a brush pile, I was now catching 15 to 20.”

Arkansas guide and Pico Lures pro Greg Robinson says he takes a systematic approach when the old reliable effort dogs out, such as trolling basic crankbaits in late spring. As many anglers experience, Robinson saw a reliable pattern or tactic fizzle out.

“I started studying if it was a color issue, or speed, or depth,” Robinson says. “I wound up putting a trailer on the back of the crankbaits with a small jig because the fish were short-striking the crankbaits.”

Robinson dug further, looking at what was happening weather-wise, finally determining that the change was due to a rising barometer, falling temperatures and a north wind. It lowered the water temperature a degree. That wasn’t much, but it was enough to force a change – if you wanted to catch fish.

Michigan fishing guide Lance Valentine is not a big crappie fisherman, but he catches just about anything else that swims in the cool northern waters. He doesn’t let himself get into a rut because he takes a simple, eight-step, systematic approach, such as Robinson describes, and applies it every time he is on the water. The approach is especially useful when fishing new bodies of water.

Essentially, being in the right location is step one. Then, find the right depth – fish where the fish are. Always place your lures where the fish can see them, which is usually just above them. Then, it is a matter of getting you trolling or retrieve speed right, followed by the lure’s size, shape, action and color.

Tim Howell, Longbranch Guide Service, looks in the rearview mirror when he sees a rut developing, basically connecting his previous year experiences in terms of the season, water conditions and weather with his present challenges. He explains he returns to areas that were productive in the past and, first, tries the same techniques.

Hopefully, that works. Like many anglers who fish for a living, Howell isn’t one to chase a loser for too long.

“If I’ve been fishing a certain pattern or style and it hasn’t produced in a couple of days, I l try different presentation and profiles of baits and hopefully put something together that produces fish,” Howell says.

How much nonproductive time must pass before you figure you might just be in a rut?

That depends. For some anglers, it’s a couple weeks; for others, it’s a couple hours. Certainly, given the great variability in fish behavior as the environment around them changes, not recognizing you may be in a rut can cause you to miss some of a season’s primetime moments.

Weekend and casual crappie anglers may find it easier to fall into a rut than the pros. The thinking is that same stuff in your tacklebox worked for you every April for the past three years so the tendency for many is to keep plugging, figuring the fish will eventually bite. Something, though, has changed, making adjustments critical.

As our experts note, find the bait, find the fish. Be willing to quickly break from old reliable lure patterns, sizes and colors. Fly fisherman like to use the term, “Match the hatch.” Flinging the same old black wooly bugger for a day will leave you with an empty creel when those trout have their mind set on an Adams Caddis.

(Ken Perrotte is a veteran outdoor writer from King George, Virginia. He is the current President of the Association of Great Lakes Outdoor Writers. Check out more of his work at www.outdoorsrambler.com.)