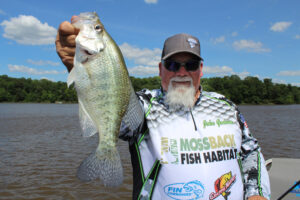 John Godwin’s face and name were very well known at the peak of Duck Dynasty TV show. The show might be over, but Godwin is using his fame to promote crappie fishing across the country. (Photo: Richard Simms)

WETUMPKA, AL. – Whether you’re a duck hunter or not, there is a good chance you are familiar with Duck Dynasty star, John Godwin. The Duck Dynasty reality TV show aired from 2012 to 2017. It was about a family who makes its living duck hunting and manufacturing products for duck hunters. But much of the time the show had nothing to do with hunting and I always marveled at the number of my non-hunting friends who were addicted to it. In fact, I never watched it until all my friends who cared nothing for hunting kept talking about it. And yes, then I became addicted.

The Robertson family was at the centerpiece of the show, but ALWAYS hovering nearby was John Godwin. The short, stubby Godwin was the quick-witted, albeit dry humor guy who always seemed to be a little goofy and a lot funny, whether he was trying to or not.

I met Godwin during a Writer’s Camp in Wetumpka, Ala. hosted by CrappieNOW Magazine and the Elmore County (Ala.) Economic Development Authority https://elmoreeda.com. Godwin was there to provide some “star power” for the writers, and it was a treat to spend an afternoon chasing crappie with him on the Alabama River. There was absolutely no star power on display, only a deep-seated passion for finding and catching crappie. Godwin is a funny guy but when he’s fishing, he is all business.

Godwin is an employee at Duck Commander (since 2002). He spends his work days mostly building duck calls. But nowadays, when he’s not building duck calls you will likely find him on the water – not duck hunting, but crappie fishing.

“Being out on the water always seems peaceful,” said Godwin. “There’s nothing like the thrill of feeling a fish bite that bait.”

Godwin had never been on the Alabama River before. He spent thirty minutes simply idling around a large embayment with his eyes glued to his Humminbird Helix side-imaged depth finder. Every time he would spot an underwater stump or other structure, he would drop an electronic mark on his map.

“A lot of people go out and just start fishing,” he said. “Well, there’s no need fishing where there aren’t fish. You need to find stuff where the fish are.”

Then came the time to home in on the details using the latest rage in crappie fishing, a Garmin Livescope that allows anglers to see fish, and even their lures, underwater in real time. Some anglers say the Livescope is too high-tech, providing fishermen with an unfair advantage.

To that, Godwin says with a wry grin, “Don’t talk with your mouth full and then pass me that tartar sauce. Crappie is manna from heaven. It’s one of the best eatin’ fish there is.”

He says the Livescope doesn’t necessarily help him catch more crappie, but it definitely helps him find bigger crappie, which is critical when he is fishing in tournaments. But using a Livescope effectively still requires a learning curve. Godwin is way higher on that learning curve than I am. At times he would actually coach me as I retrieved my crappie jig.

“Slow it down,” he would tell me. “It’s looking good. Now, stop reeling and just let it fall.”

Seconds later I’d see a flash on the Livescope screen and feel the tell-tale “thump” as a crappie inhaled my Crappie Magnet jig.

“Finding a stump with a couple of fish holding on it and then going back and catching them – there’s a lot of satisfaction in it,” said Godwin.

When he’s not building duck calls, he is on the road doing seminars, speaking engagements and promotions. He is on the pro-staff for several manufacturers including Crappie Magnet lures, SeaArk boats and Mossback Fish Habitat. Godwin has also created an offshoot of the Duck Commander business called Fin Commander.

Of course, his roots are still buried deep in duck hunting. I asked the question everyone asks, “If he could only do one, would he duck hunt or crappie fish?”

“Yea, that question has been asked a lot,” he said. “And it’s tough, that’s a tough question. It sure is. I duck hunt for a living. Listening to that wind whistle through them wings, it makes the hair stand up on the back of my head… at least when I had hair back there. But at this point, I think I’d rather fish right now.”

Whether it’s duck hunting, fishing or promoting, he says he is very lucky that Duck Dynasty gave him a platform to travel and share the things he loves.

“Yea, Duck Dynasty allowed me the fame to fish, speak, travel and meet new people,” he said. “You know, America is just awesome. There’s great people everywhere just like us.”

And with that Godwin looked down, spied another stump on his depth finder and dropped a mark on his map.

“I’ll be back right here in the morning,” he said with a smile.

(Capt. Richard Simms, CrappieNOW Editor, has a degree in Wildlife/Fisheries Management and began his career in conservation as a game warden for the Tennessee Wildlife Resources Agency before becoming a wildlife photographer, public relations officer and then a professional journalist. He has a book in print called, “An Outdoor State of Mind.” Capt. Simms created Scenic City Fishing Charters in 2006, which now features seven guides specializing in bass, catfish, crappie and walleye.)