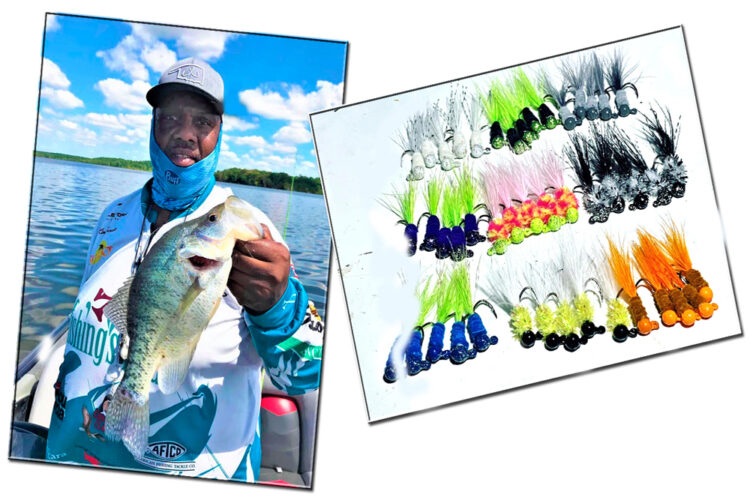 Kim Burnett is known for the colorful hair jigs he ties and sells through his Crappie Stopper Co.

The Art of Tying Crappie Jigs

Sitting in a boat over a brush pile, Kim Burnett methodically offered the crappie every color in his tackle box.

He knew the fish were down there; he could see them on the screen of his friend’s sonar unit. He felt it was just coming up with the right color pattern on the hair jigs he had before him.

Burnett fished with one color for a while, then clipped that jig off and tied on a different one. That took place for a while before he finally hit on a winner – a pink and white hair jig.

As the 1/16th-ounce jig fluttered down through the branches, he felt the tell-tale thump of a crappie and he set the hook. Seconds later, he had an 11-inch fish in the boat, the first of several he caught out of that brush pile.

“Sometimes, you just have to find the right color,” Burnett said as he unhooked the crappie and tossed it back.

Finding the right color is seldom a problem for Burnett. He ties his own hair jigs and makes them in every color pattern imaginable.

He sells his homemade jigs through his Crappie Stopper brand and is proud of the fact that he offers 41 color patterns.

“But really, the possibilities are endless,” he said. “I do a lot of custom work. Someone tells me the combination of colors they want and I tie jigs the way they want them.”

Not bad for a guy who is partially color-blind.

“I can see the primary colors – the reds, the yellows, the blues – but I have trouble with the different shades,” said Burnett, who lives in Olathe, Kan. “But the shades are usually marked on the packages of marabou I buy. And if I’m having trouble, I’ll just ask my wife.”

The crappie and fishermen seem to agree that there has been no problem with what Burnett comes up with.

He started tying hair jigs in the 1990’s out of necessity. He was catching plenty of crappie on plastic tube jigs, but he was frustrated with how many baits he was losing.

“I would catch two or three fish on a bait, then it would get torn up and I would have to go to another one,” he said. “I thought, ‘I have to start making my own jigs.”

He went to a local Cabela’s store and got help from the employees in the fly shop, then started experimenting. Before long, he was hooked – especially after he used his homemade jigs to catch big crappie.

“The first time I used them was in the winter off the docks at Melvern Reservoir in Kansas),” he said. “Marabou jigs are especially effective in the winter because you can keep them fairly still and that hair will still undulate.

“The crappie don’t want much action on a bait in that cold water. They won’t chase a bait. But if you put it right in front of their face and it’s still moving a little, it drives them crazy.”

From that point, Burnett began using nothing but the hair jigs he tied. And the word quickly spread.

“I would be the only fisherman on the dock catching crappie and everyone would come up to me and ask me what I was using,” Burnett said. “I would show them and they would want to know where I bought them.

“Everything I catch is on the jigs I make.” – Kim Burnett

“When I told them I made them, I would give them a few. It got to the point where I was giving away so many jigs, I figured I might have to start charging people for them.”

Burnett started his business in 1998 and later came up with the name Crappie Stopper. If you’re picturing a large factory operation with multiple workers assembling the jigs and the packaging, think again. This is a one-man business.

Burnett ties jigs virtually every free minute he gets away from his job as a supervisor of custodians for a large school district.

He gets an order, then sits down at his tying bench to fill it. He says he can tie 45 jigs in an hour.

“I pump them out,” he said with a laugh.

Last year he says he tied 4,500 jigs and had customers from most of the states east of Kansas and even Canada.

He also ties an assortment of bluegill flies and enjoys using them to catch big panfish.

He uses a 5-weight flyrod to fling the wet flies to the crater-like nests the bluegills fan out. When one of the flies slowly sink and a big bull rises out of the shadows to strike, that’s the ultimate for Burnett.

He has caught crappie as big as 2 pounds, 13 ounces on his jigs, and wipers (white bass/striper hybrids) up to 8 pounds on his flies.

He takes pride on the fact that his jigs and flies display the durability he was seeking when he turned to making his own baits.

“I went all winter with one orange and white jig tied on one of my rods and I caught over 200 fish on it,” he said.

Burnett leads a busy life. When he isn’t working, tying jigs or spending time with his wife, he is teaching youngsters to fish. He volunteers for Fishing’s Future, helps coordinate a large youth fishing derby in his hometown of Olathe, Kan., and constantly gives fly-tying demonstrations.

“It’s important to me to teach kids to fish,” he said. “Someone took me fishing when I was young, and this is the way I can pay it back. The kids are our future; they’re the ones who will protect our resources in the years to come. It’s my duty to get them off their phones and video games and show them how much fun fishing can be.”

(Brent Frazee is an award-winning writer and photographer from Kansas City, Mo. You can see more of his work by going to his website brentfrazee.com.)