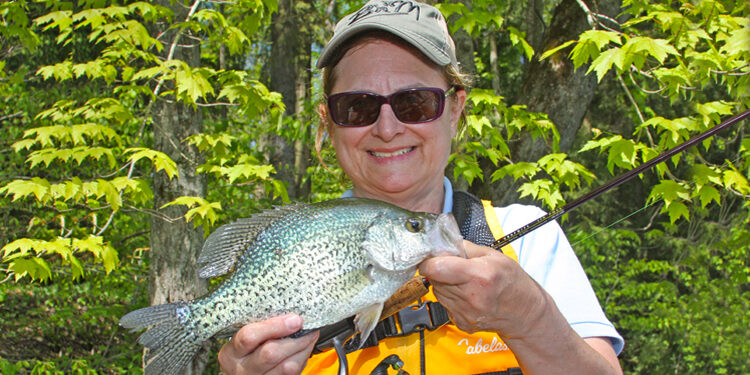 Know When to Throw ‘em

As a youngster in the early 1960s – before all the fancy soft plastic jig bodies with action tails appeared on the market – I fished for crappies with 1/16-ounce Beetle Spin which provided a colorful split-tail grub as visual target along with flash and vibration from a small Colorado spinner.

Then in my teens, I was introduced to the Crème Plastic Worm and the Original Rapala Minnow, and in the process, discovered smallmouth bass in the local river. Having reached that fork in the waterway, I opted to chase bass for several decades. Interestingly, I continued to use the larger Beetle Spin model for bass in ponds and creeks.

There are times when flash and vibration added to a jig is a better trigger than a straight jig.

Eventually, tired of tournaments and fast boats, I fell in with a group of easy-going crappie-fishing anglers, finding satisfaction in devoting a chunk of fishing time to crappies. Suddenly I found myself bombarded with all sorts of new crappie jigs to experiment with. However, I did not forget the success I had with small Beetle Spins back in the 1960s, so I made sure I had a supply of jig-spinners in that new bulging crappie tackle box that also included flash-inducing Road Runner blade jigs and Charlie Brewer’s Whirly Bee.

I don’t fish baits with blades for crappies every outing. But there are times I believe the flash and vibration of these baits is a better trigger than a straight jig.

In my home state of Pennsylvania, water in our lakes will be moderately clear to very clear. A little too much rain and the runoff can dirty up the water quickly. When facing a normally clear water lake that has become dingy, I’ll opt for 1/16-ounce Road Runner head with a shad-tail body. I cannot provide clear cut evidence that it makes a big difference in drawing more strikes, but that bit of flash and thump gives me more confidence.

The Whirly Bee may not be as widely known as Beetle Spin and Road Runner baits. But this two-inch split tail grub with tail spinner has proven extremely effective during mid-spring and fall with water temperatures in the 50s for crappies holding in deeper water. Count the lure down to depth of fish, then employ a slow-but-steady retrieve with this bait, keeping it just above deeper brushpiles and along ledge drops to draw hits from lethargic crappies. A Whirly Bee body color of White or Shad coupled with flash from the tiny tail spinner provides the perfect imitation of a minnow swimming nonchalantly by.

Speaking of spring fishing, during a late spring Crappie Camp on Pymatuning Lake a decade ago, TTI-Blakemore’s TJ Stallings demonstrated the effectiveness of a 1/32-ounce Road Runner with a tiny plastic body suspended below a bobber fished in emerging lily pad beds where black crappies were spawning. It is impossible to “retrieve” a jig or jig-n-bobber through a pad bed. But lobbing or simply lowering the Road Runner to an open area in the bed, then jiggling the bobber in place by gently shaking the rod tip results in a flashy minnow-like presentation which bedding crappies slurp up.

My wife, Marilyn, and I consider a Beetle-Spin style of bait to be a great shallow-water fish locator when crappies are spread out in a large area or are on the move – rather than bunched up in groups or a school. The safety-pin spinner attachment makes this lure more snag-resistant than a regular jig, so it comes through brushy areas and sparse vegetation with relative ease.

This presentation works best when you need to cover lots of water. Such as when crappies are making a gradual location change from spawning sites across flats to deeper water. It’s also produces in the reverse during the early fall cool down as crappies follow baitfish from open water back to shallower water.

There are other instances during the season when crappies may not be concentrated at specific sites. Just this past week, Marilyn and I fished Conneaut Lake, a 925-acre natural lake with very clear water thereby producing impressive weed-covered flats surrounding multiple deep-water basins. Normally in late summer and early fall, black crappies are found at key areas among the deeper weeds. However, copious amount of rainfall this summer resulted in dingy, higher-than-normal water level which stunted the regeneration of deep weeds following an earlier herbicide treatment.

It didn’t take long for us to realize crappies were not stacked up in the usual places because the cover wasn’t there. A bit more exploring indicated crappies seemed to be roaming randomly across the flats where vegetation was struggling to come back. While I stayed with a favorite 1/16-ounce Weedless Crappie Slider, Marilyn switched to a 1/4-ounce white Beetle Spin and proceeded to out fish me four-to-one on crappies. Her heavier bait permitted longer casts, and allowed a slightly faster retrieve – thereby covering more water. The larger profile, distinctive flash and thump apparently was the trigger needed.

When putting together your crappie box of baits, your arsenal isn’t completed unless you include jigs combined with flashy blades.

(Darl Black began his career as an outdoor writer more than 50 years on a on a long-forgotten communications instrument – a typewriter. Since then, his columns, articles, and photos have appeared in dozens of regional and national fishing related publications.)