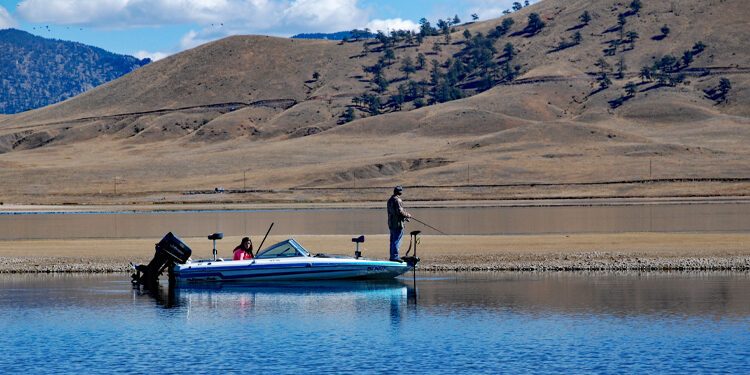 When fishermen think of Colorado, they think of clear mountain trout streams. However, the state has several reservoirs that provide some excellent crappie fishing.

It’s not all trout in the Centennial State

The Colorado wind is relentless. I had all I could handle keeping the boat positioned, but I also kept an eye on an angler in a float tube who was probing the docks like a heron. I watched him as he snaked a couple good-sized crappie from under the docks.

Eventually the angler headed for shore. I saw him pull his float tube up on the rocks and head up the hill to his car. Right about then a gust of wind sent the tube airborne and it skipped like stone across the water until it lodged against the docks. The angler eventually came back down to the water’s edge and did a pirouette wondering where in the heck his tube had gone.

I fired up my motor and went over and snatched the tube and pulled it back over to the shore.

“Man, I can’t thank you enough!” he laughed. “I couldn’t figure out where my tube had gone.”

This peaked my curiosity.

“On this little tube right here,” he said as he pushed his rod tip on my direction. “Here you can have it,” as he bit it off and handed it to me.

“They’re not under every dock,” he explained. “You got to hunt around a bit, but there’s some good ones.”

He thanked me for the tube rescue again and headed up to his vehicle.

I had no idea there were crappie like that in Colorado. Most people don’t. Colorado is the land of trout, right?

Not always. There is some excellent crappie fishing to be had in the Centennial State if you know where to look.

“Crappies are pretty widespread particularly in the reservoirs along the Front Range,” said Colorado Parks and Wildlife Aquatic Supervisor Jeff Spohn. ‘They do pretty well in some of our reservoirs that have relatively warm water. Crappies are popular, particularly in the northeast region. We’re starting to manage more for crappies by limiting the number of wipers we plant and by instituting special regulations.”

“It is difficult to say which reservoir has the best crappie fishing because anglers desire different things,” admitted Mandi Brandt CPW Aquatic Biologist for the Lower South Platte River Basin. “Some anglers desire higher catch rates and some desire larger fish. That said, I would say anglers could anticipate the best overall fishing experience at North Sterling Reservoir. The reservoir supports good numbers of crappie for high catch rates, and good-sized crappie as well for those anglers looking to catch large fish. Not only is there a healthy black crappie population, but a very substantial naturally reproducing white crappie population. Crappie are structure-oriented fish, and out of the four large irrigation reservoirs on Colorado’s Northeastern Plains, North Sterling Reservoir has the most structure.”

John Martin Reservoir is another lake with proof of how good Colorado crappie fishing can be if you have just one, important ingredient- water.

“It kind of started in 2015 when we got a big shot of water,” said CPW Aquatic Biologist Jim Ramsey. “Fortunately we’ve been able to keep that water and it’s produced a boom cycle for crappies. 2019 was phenomenal and 2020 was even better.”

Pueblo Reservoir is known for producing great fishing for a number of species including crappies.

“Crappies have been popular with anglers at Pueblo, but it seems increasingly so over the past several years,” said CPW Aquatic Biologist Carrie Tucker. “The past several years of higher water have helped the crappies flourish and achieve some natural reproduction success in the reservoir because the brush and trees have been submerged for long periods.”

I had Boyd Lake pegged as a walleye/trout body of water and had done well on those species in the past. I had no idea that Boyd Lake was good for crappies. Come to find out, there are a lot of Colorado reservoirs like that.

If I hadn’t rescued the guy and his float tube I may have never known.

My next trip to Boyd Lake I was on a mission to catch crappie. I didn’t even think about heading out in the lake. I headed straight for the marina and the docks. I was armed with a medium/light Favorite spinning outfit loaded with 4-pound fluorocarbon, which I planned to use to pitch 1/32-ounce Chekai tungsten ice-fishing jigs along, under and in the docks. I used my Minn Kota trolling in reverse to position so I could cast parallel to the docks and have more control. Casting parallel to the docks kept my jig in the strike zone longer and on my first cast I felt a slight “tick” as hopped the jig and soon hoisted a 12-inch black crappie in the boat. Productive docks usually produced more than one fish.

It was still early September and a lot of boats were still in their slips. The boats proved to be perfect overhead cover for the crappies. Casts had to be extremely accurate where boats were only a foot or so from the dock. Doing so sometimes was not easy in the Colorado wind. Using a pendulum cast was an accurate and quiet way to present the Custom Jig and Spins Chekai jig. On one cast I pitched the jig and was watching the line sink next to a boat when it suddenly stopped. I didn’t feel a thing, but I set the hook and a foot-long speck was on the other end.

Using the trolling motor in reverse I eased into a slip and dropped my jig in the V of the docks and the angle iron supporting it. Halfway down the jig stopped and I hoisted the crappie between the dock and the support.

The bait didn’t seem to matter very much. One-inch Exude twister tails in white and chartreuse worked well along with Northland Impluse Bloodworms. I’m sure tube jigs would have been equally effective. It was more about the presentation.

But the moral of this story is that the next time you think of fishing and Colorado, remember it’s not only trout.

(Mike Gnatkowski/gnatoudoors.com has been an outdoor writer/photographer for more than 40 years and has a degree in Biological Journalism/Outdoor Writing. His writing and images have been published in dozens of regional and national publications. Mike’s been a Great Lakes charter boat captain and river guide in another life and is an avid waterfowler and upland bird hunter. He fishes crappies every chance he gets from his home in Muskegon, MI.)