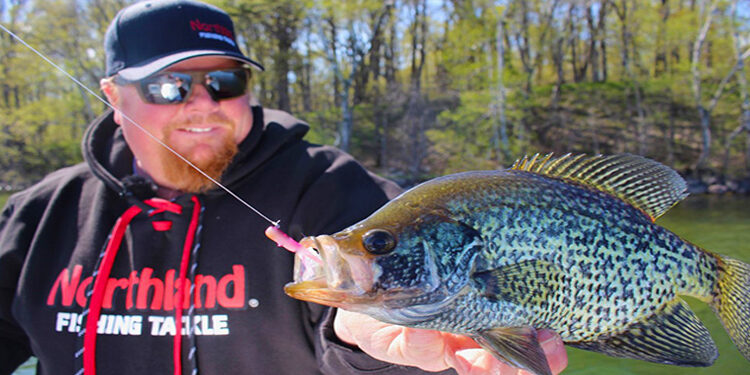 As often as not, when fishing for crappie using floats, the float won’t actually go under water. Frequently anglers will simply see the float wiggle or even roll over on its side. It takes a very sensitive float to allow an angler to detect those subtle strikes.

When anglers fish with a float, many are under the impression a fish bite always results in the float getting pulled under water. That, however, is not always the case. In fact, the preponderance of panfish bites are transmitted as pops, pings and pulls.

The folks at the NPAA say run-of-the-mill floats – as seen in the bargain bins – aren’t designed for precision, finesse fishing, but rather to sell at the cheapest possible price.

They say Northland dismisses all those foibles with its new Lite-Bite Spring Float. Built from premium balsawood, the remarkably sensitive floats are equally as buoyant.

Northland pro Brian “Bro” Brosdahl is a proponent of floats, especially for springtime panfish and whenever fish are hunkered shallow.

“Floats get a bad rap sometimes for being too amateurish,” quipped Bro. “The opposite is true. Floats let you fish at precise depths and in tight places you can’t cast and retrieve a jig without fouling. You can fish super slow with a float, too. Where a naked jig keeps falling, a float holds the bait right in the target zone.

“Northland’s new Lite-Bite Spring Float is versatile, too,” continued Bro. “For spring crappies and bluegills, I cast and slowly drag it back, sometimes pausing along the way. Curious panfish will swim up and eat it on the stop. Sometimes, popping with pauses gets them going. Just experiment until you find what’s doing the trick.”

Read more on Northland’s website or watch the video below.