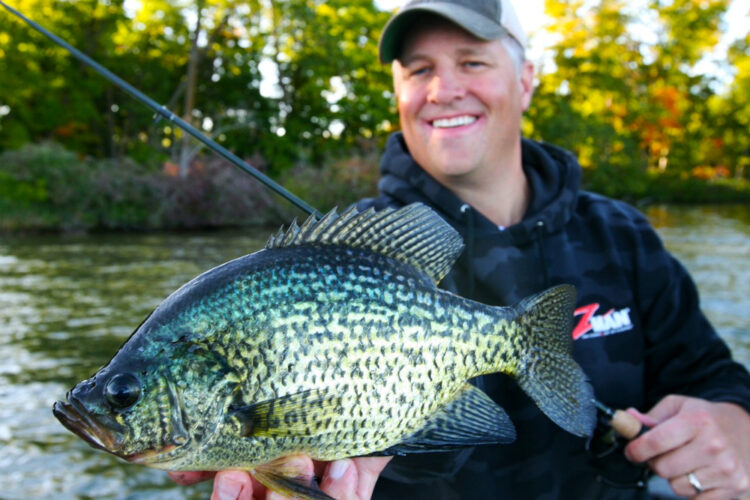 Professional MLF bass angler David Walker has won more than $2 million on the pro bass
circuit, but he is quickto admit he also has an addiction to crappie. (Contributed Photo)

Panfish Bait of the Future?

Even among the nation’s best bass anglers, whispers of words like big crappies attract a captive audience, every time. When tournament seasons end, plenty of bass fans go hot on the trail of their favorite panfish – silvery, palm-stretching wraiths sometimes known as “hubcaps.” Prospects of hundred fish days and flaky-white fillets – battered, seasoned and sizzling in a skillet – prompt even the most jaded anglers to drop what they’re doing and beeline for the nearest crappie hole.

It should come as no surprise then that while driving home from his last big bass derby of the year, Major League (Bass) Fishing competitor David Walker found himself daydreaming about his local crappie lake and the makings of an epic fish fry.

“After a long season of bass tourneys, I love coming home and catching a boatload of crappies with my daughters,” says Walker, a wizard with a small jig and softbait.

A lifelong panfish pursuer, Walker believes he has discovered something big in the arena of soft plastic baits for crappies, perch, and bluegills – an idea that occurred to him while fishing a bass tournament.

“When I first started throwing ElaZtech softbaits for bass, I quickly learned an almost magical advantage of the material, which was that panfish and other nuisance fish couldn’t peck the tails off the back of your bass jigs. While bass fishing with traditional soft plastics, it’s always been a headache and major time waster when you’ve got perch, sunfish and other tail-pecking fish in the area. But using these new wave softbaits, I realized panfish could peck them all they wanted. I could stay in the game, non-stop, without constantly grabbing and re-rigging a new bait.”

All the while, Walker was thinking about crappies. He knew that ElaZtech’s advantages held tremendous panfish potential. “ElaZtech is wonderfully soft, making it easy to activate, so it moves and undulates fluidly in the water,” he notes.

“Like most anglers, I had spent years accepting that traditional panfish sized soft plastics made from PVC, or polyvinyl chloride, just don’t move that well in the water. Because they’re relatively rigid, traditional soft crappie baits tend to lose action the smaller you make them. So, you often had to resort to larger baits than you wanted, or had to retrieve them faster to achieve the desired tail movement or the right swimming action. Neither are ideal for a fish that often exhibits size and speed selectivity in their feeding habits.

A few days after the finish of a bass tourney season, Walker found himself on his favorite crappie lake. He spotted the aqua-blue packs of Z-Man baits lying on his boat deck and a light bulb ignited.

“I picked up a pack of Slim SwimZ— a little 2-1/2-inch paddletail swimbait – and put it on an 1/8-ounce panfish jig. Almost immediately, it became my favorite crappie bait.

“From the first few casts, I noticed that the bait’s tail was so easy to activate—even at slow retrieve speeds.

Walker, a deep-thinking angler who’s constantly tinkering and doctoring baits to maximize their performance, began wielding a small pair of super-sharp scissors for a bit of minor ElaZtech surgery.

“I’d cut a quarter inch off the Slim SwimZ’ head for a slightly shorter profile – or just enough so the bait maintained its original size after rigging it on a jighead. I also started thinking about ways of altering tail action with a snip here and a slice there.”

The softness, action and buoyancy factors further moved Walker to think about altering the tail side of the bait.

“Once the water gets cold and I’m fishing more vertical, I like a bait whose tail quivers and quakes with the slightest movement of the rodtip or line. The 2” GrubZ is a classic twister tail that’s an exceptional fish catcher right out of the bag.  That bait works for casting or vertical jigging without any alteration.

“But the more I looked at the Slim SwimZ, the more it struck me that I could snip off the boot-tail and create a sword-tail effect. Lay the bait on its side and follow the angle of bait’s underside, cutting at a slight upward angle. You want to taper down to a nice thin sliver of material, which helps get the most movement out of the tail.

“First time I did this and put it in the water, I couldn’t believe how little effort was required to achieve that super-subtle tail-kick. In fall and winter especially, the best way to trigger a big crappie is to hover a jig a few inches to a foot above them and barely quiver the soft plastic tail. The altered Slim SwimZ pulled this move off to perfection—the other reason it’s become my go-to crappie bait. And if you glue it to your jighead with something like Loctite Gel Control, you create a permanent “lure” that will catch dozens and dozens of big fish without replacing the tail.”