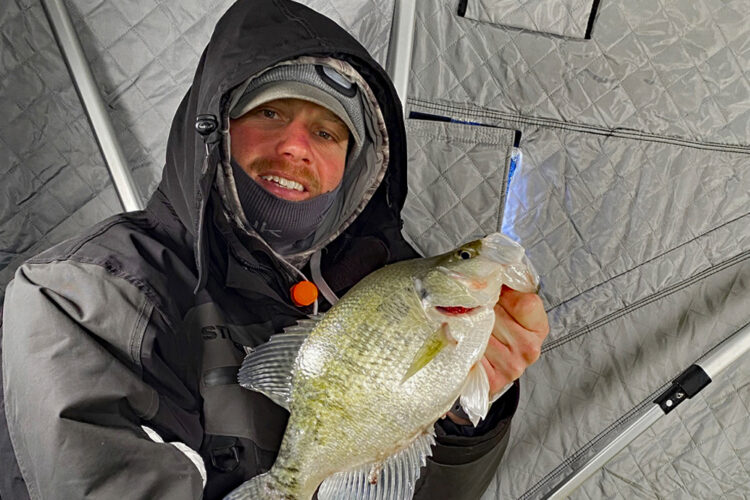 Dustin Hobbs knows that the cold of winter can be a great time to catch big crappies in Kansas. (Contributed Photo)

Dustin Hobbs looks forward to the kind of weather some, or most, fishermen dread. About the time fair-weather fishermen start storing their gear away, he enjoys some of his best crappie fishing of the year.

The cold, blustery weather of December is just a minor annoyance for Hobbs, who fishes the reservoirs of eastern Kansas. When the crappies are biting – as they often are in winter – he’s going to be out there.

“By mid-December, the crappies school up, they’re in the brush, and they’re chasing shad,” said Hobbs, who lives in Topeka, Kansas “They’re feeding up for winter, and they’re fat. It can be some of the best crappie fishing of the year.”

Hobbs, a top tournament fisherman in Kansas, fishes for crappies year-round. But no time of the year excites him more than winter.

He has long considered a water temperature of 38 degrees to be his magic mark. That’s when the crappies will school up in the brush along channels and drop-offs, and actively feed.

“They use those channels are highways,” Hobbs said. “They’ll travel in schools. But if there’s a brush piles along the edge of those channels, it can hold big numbers of fish. We’ve sat over one brush pile and caught a limit of crappies.”

The daily creel limit varies by reservoir. It is 20 at popular Kansas bodies of water such as Clinton, Perry, El Dorado and Glen Elder, but you can keep 50 at other reservoirs.

Before the Garmin LiveScope came along, Hobbs caught most of his big crappies from the bottom of the brush piles. But now that the sonar unit, which shows real-time movement of the fish, has hit the scene, he often uses a different strategy.

“By mid-December, the crappies school up, they’re in the brush and they’re chasing shad.” – Dustin Hobbs.

“LiveScope has shown me that even if I find a big school of crappies, the big ones will be off to the side of the brush,” Hobbs said.

He will hone in on those individual marks, targeting the biggest crappies he can find. That strategy often works.

Fishing vertically with large-profile jigs, he has caught crappie as big as the 2-pound range.

“I’ve caught quite a few 2-pounders in winter,” he said. “That’s a pretty special fish in Kansas. We don’t have a whole lot of fish bigger than that.”

Hobbs catches many of his biggest crappies on big baits – for example, a 3-inch Bobby Garland Slab Slay’R or a Top Secret Stinger.

Junebug is one of his favorite colors for winter fishing. He also finds success on white and chartreuse color patterns.

He lets the crappies’ mood dictate how much action he puts on his baits.

LiveScope has shown Hobbs that the fish don’t always hang in the brush. Some days, they will be cruising the river channels, chasing food.

Again, Hobbs will target the largest individuals (indicated by the largest marks) and stay with them. He will use that strategy all the way until the ice goes on.

That’s when most Kansas crappie fishermen hang it up. Not Hobbs. As soon as there is safe ice, he will switch gears and start drilling holes to find crappies.

In many winters, that means sitting over brush piles that produced prior to ice-over and vertically dangling baits to the crappies. But last winter, Hobbs used a much more mobile approach to find fish, thanks to his LiveScope.

“Last year, we didn’t fish much brush when we were ice fishing,” he said. “We would just stay on the schools of fish.

“The crappies were chasing shad, and we stayed on them. They were in the same general area every day, but you’re fishing a small hole. To keep up with them, you drill a lot of holes.”

Hobbs relied on his LiveScope to tell him where the crappies were. The drilling of the holes had varying effects on the fish. Sometimes, the sound would spook them. Other days, they would stay put. But with many holes drilled, Hobbs often could find a place to head them off, at least for a short time.

“It seems like they eventually got tired of moving and you could catch up to them,” Hobbs said.

Hobbs, his girlfriend Megan Springer and friends were out on some bitterly cold days. But few were nasty enough to keep them off the ice.

“We went to short poles and tents and that helped a lot,” Hobbs said. “It would take a lot to keep us off the ice.”

Still, Kansas’ ice fishing opportunities are limited. Because of its variable weather, the state has a limited amount of time when the ice is safe enough to head out.

The Kansas Department of Wildlife and Parks issues the following safety tips:

Regardless of the weather, Hobbs loves to fish in winter. He grew up ice fishing with his dad in western Kansas, and that passion has continued into his adulthood.

“If you dress for it, it’s not bad being out there,” Hobbs said. “When the fish are biting, you hardly notice it.”

(Brent Frazee is an award-winning writer, photographer and blogger from a suburb of Kansas City, Mo. He retired from The Kansas City Star in 2016 after working as the outdoors editor for 36 years. He now writes for magazines, websites and newspapers.)