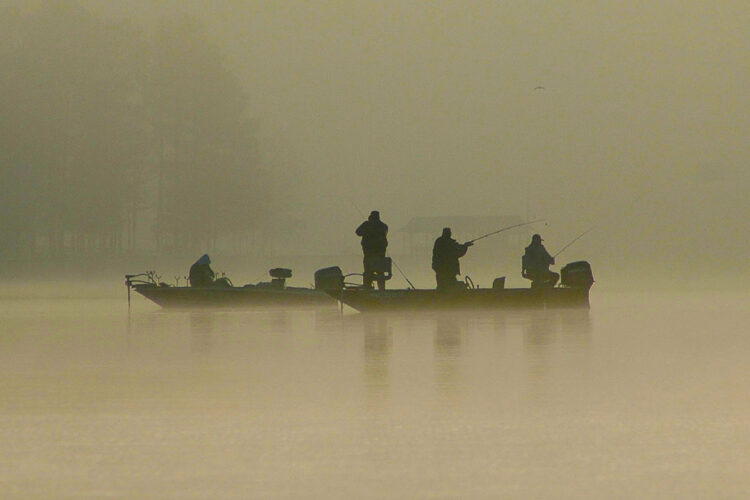 When the weather’s frosty, and a slight fog may be on the water, Brad Whitehead shoots docks to find slabs

Tournament fishermen know that to catch the biggest crappie in any lake, you need to fish a place where no one else does. At this time of the year, Brad Whitehead of Muscle Shoals, Alabama, catches big crappie where few people search for them – Wilson Lake on the Tennessee River in north Alabama. His wintertime tactics will work for you in your local southern lake.

Pickwick Lake on the far northwestern end of Alabama homes legendary crappie action as the Tennessee River flows through Mississippi, Alabama and Tennessee. Wheeler Lake in the north-central section of the state on the Tennessee River hosts national crappie tournaments. But Wilson Lake seems to get no respect. Everyone knows about Wilson’s productive fishing for other species, but in my entire life of fishing on Wilson, I can’t recall ever seeing a crappie fisherman there. I’ve personally only caught one or two crappie on that lake ever.

You can imagine my surprise when Brad Whitehead told me, “Wilson’s a great crappie lake. From the middle of November until February, I have much of Wilson to myself, for crappie fishing. Wilson’s a very-deep lake without much natural structure in it. You have to fish the edges of the creek channels or find underwater ditches 2-4 foot deep you can fish.”

When Whitehead first started fishing Wilson Lake, and his depth finder would show 50-70 feet to the bottom, he thought he couldn’t catch crappie in water that deep. Because the lake had so-much current coming through it and so-little structure in it, most people naturally assumed the lake wouldn’t hold many crappie.

Whitehead also has learned many crappie fishermen don’t fish Wilson Lake because its most-productive months are in the winter.

“I’ve put my boat in the water at Wilson when the air temperature was 17 degrees and had a great day catching my limit of crappie,” Whitehead recalls.

Shoot Docks in the Winter

Some years ago, Whitehead started shooting docks at Wilson, to reach places to

which he couldn’t cast. To shoot a dock, Whitehead uses a B‘n’M SharpShooter rod that’s extremely flexible with plenty of tip action and 4-pound-test line, due to Wilson’s very-clear water in the winter. Using 4-pound test line, he puts a crappie jig between his thumb and forefinger, disengages the bail and holds his line with his other forefinger. By pulling the jig close to him, he loads the rod to bend it dramatically, points the tip of the rod to where he wants the jig to go and releases the jig, causing the rod to flex and shoot the jig back under the dock like a slingshot. Just as he releases the jig, he lets go of the line he’s holding with his other finger. Once the jig’s under the dock, Whitehead counts it down as it falls and then slowly retrieves the jig out from under the dock.

The majority of the crappie range from 13 to 15-1/2 inches. He says a good day shooting docks at Wilson in the winter usually will produce 25-35 crappie. On a really-good day, you may catch as many as 40.

“Once you catch 25-35 Wilson Lake crappie, you’ve got a cooler full because those Wilson crappie are so big,” Whitehead reports.

Whitehead mentions that in December, when he cleans fish, he’ll often find 3-4 inch long shad minnows – known as yellowtails locally – in them. So, he knows these big crappie will eat big baits.

“You may locate crappie schooled-up under docks during the winter months. I’ll often catch 15-20 big crappie out from under one dock. Be quiet, whether you’re catching a fish or putting one in the boat or cooler to take that many fish at one dock. Wilson crappie are extremely sound-sensitive, so don’t let your jig hit a piling, your boat in the water or any obstruction under the dock.”

Whitehead usually trolls Wilson in 19-20 feet of water. He tells one of the best-kept secrets on Wilson Lake when he explains, “I’ve even caught crappie in 52 feet of water there. Although this sounds like a fish tale, it’s true. When catching 52-foot deep crappie, I’ll be fishing minnows only.”

Whitehead does what most other crappie fishermen won’t or don’t do. He’s fishing in the places where everyone says no crappie live. That’s why he catches those big crappie that most crappie fishermen never see. Whitehead breaks crappie-fishing rules.

To catch big crappie this winter, consider breaking the rules, fishing places everyone says hold no crappie, using the tactics few other fishermen use and fishing the water depths that rarely, if ever, see minnows or jigs.

(John Phillips holds an array of awards including the 2012 Homer Circle Fishing Award from the American Sportfishing Association and the 2007 Legendary Communicator inducted into the National Fresh Water Hall of Fame. He has written more than 6,000 magazine articles and served as Outdoor Editor for the Birmingham Post-Herald for 24 years. Phillips is a founding member of the Professional Outdoor Media Association and an active member of the Southeastern Outdoors Press Association. The author of more than 100 books, you can learn more from his book, “Crappie: How to Catch Them Fall and Winter.)