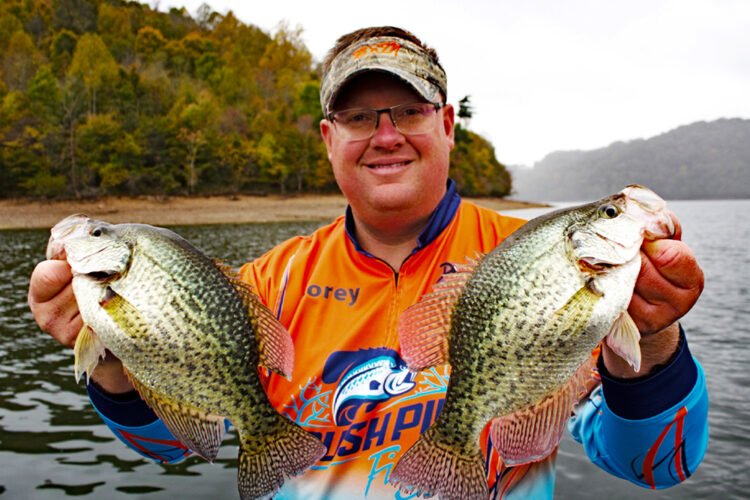 Capt. Corey Thomas has been a guide for only two years, but he says he has fished the professional crappie circuit for ten years. “Becoming a guide has always been my dream,” he said. (Photo: Richard Simms)

CELINA, Tenn. – If you are an experienced crappie angler you know the most important lesson you’ve learned over the years is, “Always watch your line.”

Sometimes when a crappie strikes, all you will see (emphasis on “see,” not feel) is a tell-tale ‘twitch” to indicate a fish has gently inhaled your lure.

Like many crappie anglers these days, however, Capt. Corey Thomas is breaking all the rules. Capt. Thomas has come to live and die by his Garmin Livescope – an electronic unit that actually allows skilled anglers to watch fish, and even their lure, underwater in real-time to know when a fish has “taken the bait.” Rather than watching his line, Capt. Thomas very rarely takes his eyes off his Livescope screen. And he is a master at the craft.

“This is more like playing a video game,” said outdoor writer Rob Somerville, experiencing Livescope for the first time. We were both visiting for the annual Tennessee Outdoor Writers Association conference.

“Historically (Dale Hollow) has not had many crappie fishermen except for the locals who have always known what was here and they’re not ones to talk.” ~ Capt. Corey Thomas, Dale Hollow Crappie Guide.

Throughout the morning Capt. Thomas consistently schooled us on Livescoping deep-water Dale Hollow crappie. Most schools he located on isolated, offshore structure in 25 or 30 feet of water. After years living with his Livescope, he has learned to read, and sometimes predict, a crappie’s reaction to his well-presented lure. It can be difficult finesse-fishing tiny crappie jigs in deep water. However, Capt. Thomas has figured out how to up his odds, and his clients’ odds, using the advanced technology available with Livescope.

THE SECRET IS OUT

As home of the official world record smallmouth, Dale Hollow is best known worldwide for its smallmouth fishing.

“I like it that way,” said Capt. Thomas with a smile. “Historically (Dale Hollow) has not had many crappie fishermen except for the locals who have always known what was here and they’re not ones to talk. That means I’m not the most popular with those guys but it’s too nice of a lake to be kept secret from everybody else.”

It was about two years ago when Capt. Thomas, a pharmacist by trade, threw his hat in the, guiding ring.

“I’m kind of new in the guide business but not new in the fishing business,” he said. “I’ve been fishing (crappie) tournaments for the last ten years. Becoming a guide has always been my dream. I thought I’d just hate myself if I didn’t just try it. so here we are.”

“Here” is apparently a good place for Capt. Thomas to be as his open dates routinely stay booked up for months in advance. So much so that he sees the possibility of guiding becoming a full-time gig someday.

“Hopefully in the next two years,” he said. “I need to get my college loans paid off and get some financial things in order and then keep a part-time job leaving me five days (a week) to do this.”

Capt. Thomas is clearly in love with Dale Hollow. He lives more than an hour away in Kentucky and pays a hefty fee for a non-resident guide license in Tennessee. Making the one-hour drive from home, he actually bypasses Kentucky’s Lake Cumberland to fish on Dale Hollow.

“It’s pristine,” he exclaims. “It still feels untouched to me. The (crappie) are huge. Probably a pound-and-a-half average and lots of two-pound-plus fish.”

He adds that Lake Cumberland has massive fluctuations in water level, making it much more difficult to consistently pattern fish – not a problem for Capt. Thomas on Dale Hollow who focuses almost exclusively on crappie year-round.

This time of year, he finds fish primarily using his Livescope. However, his favorite time of year is late winter and early spring when his preferred technique is longline trolling and pulling planer boards.

“The Spring during the pre-spawn period is my favorite time to guide here,” he said. “From the middle of February all the way to the end of April.”

Like many other professional crappie anglers these days, Capt. Thomas is a huge fan of B’n’M fishing rods and Crappie Magnet lures.

(Capt. Richard Simms, CrappieNOW Editor, has a degree in Wildlife/Fisheries Management and began his career in conservation as a game warden for the Tennessee Wildlife Resources Agency before becoming a wildlife photographer, public relations officer and then a professional journalist. He has a book in print called, “An Outdoor State of Mind.” Capt. Simms created Scenic City Fishing Charters in 2006, which now features seven guides specializing in bass, catfish, crappie and walleye.)