Crappie Tips from an Outlaw 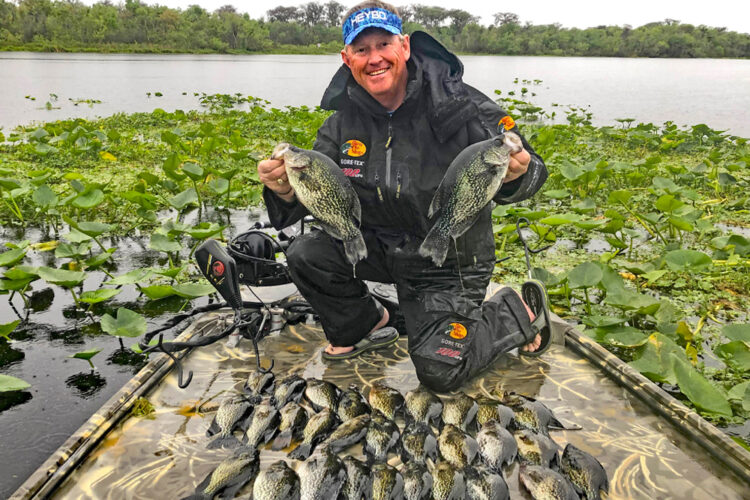 While many crappie fishermen are hunting deer during the winter, and there’s less fishing pressure on the lakes, Whitey Outlaw says he can catch limits of good-sized crappie.

How to Catch Wintertime Crappie

Whitey Outlaw is a third-generation crappie fisherman and longtime tournament crappie angler, who lives in St. Matthews, South Carolina. Like most crappie anglers, Outlaw must make adjustments to find and catch wintertime crappie.

Outlaw said, “Crappie holding on their winter pattern, in most southern lakes, will be at 12-18 feet deep on the ledges and/or under stumps and will be somewhat dormant because the water’s cold.”

Although most crappie fishermen believe winter crappie are hard to catch, Outlaw says they aren’t. He says you just have to do have to fish slower than in the spring and the summer.

Many factors will affect your success, including the barometric pressure, the wind, the air and water temperatures, the water’s color and the fish’s mood. But if you locate the crappie, you can make them bite. At some time, those fish will have to eat. So, stay on top of them with bait. I use a lake map to pinpoint creek channels, drop-offs, ledges and old river beds and use my depth finder to search there for those schooled-up crappie holding around structure.

“To catch dormant crappie, I’ll use light line, small hooks, small minnows and small jigs,” said Outlaw. “When I find a school, I’ll tight line with eight, 14-foot poles on my boat’s front to hold the baits away from the boat. These stiff poles will pull the crappie away from the cover. I’ll move very slowly along the edges of drops-offs and ledges.”

When you catch a crappie, throw out a buoy marker, since other crappie are probably close by. Once the marker is out, watch your depth finder, and determine what kind of structure is there. When those crappies stop biting, pick up your marker, and continue on down the ledge, until you locate another stump, a brush pile or a school of crappie. If you fish a very clear lake, don’t be surprised if the winter crappie are down at 25-40 feet.

“In the winter, I fish minnows most of the time on a double-hook crappie rig with 1/2-ounce of lead,” said Outlaw. “The size of minnow you fish is critical to the number of wintertime crappie you’ll catch. Let the crappie tell you what size minnows are best that day. I like to have a pound of minnows – about 25 dozen – to fish a winter’s day. On a good day, I expect to catch 50 – 60 crappie and cull them to take home 10 – 20 slabs. In the winter, you’re lucky if you identify one good school of crappie per day, so, stay with it all day. Often the crappie will school along 25-50 yards of bottom.”

“In the winter, I fish minnows most of the time on a double-hook crappie rig with 1/2-ounce of lead. The size of minnow you fish is critical to the number of wintertime crappie you’ll catch.” ~ Whitey Outlaw, Professional Crappie Angler

He says his most-productive place to crappie fish in the winter generally is on a main lake on a river channel ledge with stumps, logs, trees, trash and bait fish. Even winter crappie averaging 1-1/2 to 1-3/4 pounds each still want to be close to deep water.

“In my area, Lake Santee Cooper like many other lakes across the country, homes plenty of shallow water, 4–12 foot deep, covered in grass,” he said. “Once the grass dies off in the fall and the winter, it gives off heat – just like hay in a hay field does. You’ll often locate crappie, baitfish, insects and freshwater shrimp there.”

Outlaw said he will actually dig holes about the size of a soda can’s bottom in the grass to drop jigs through them.

“You can use various tools to dig the holes. I prefer a 10-foot piece of 1/2-inch shallow-wall conduit cable that electricians use. I’ll use a pipe bender to create a 12-inch bend on the end of the conduit. That size tool works great digging holes in the grass by pulling the grass back and forth, without pulling any of the grass out of the hole. Crappie will attack and eat most anything that drops through a hole in the grass. Some disturbance in the water will cause critters concentrating in the grass to start to fall also.”

Crappie fishermen don’t catch crappie in the wintertime for many reasons. Cold-weather crappie anglers may:

Bonus Tip: Don’t be afraid to put some color, sparkle or glitter besides a minnow in the water. If you’re not catching wintertime crappie, start experimenting with jig and minnow combinations, using different colors.

Outlaw says wintertime crappie fishing is like coaching a football team. You have to run different plays to determine what’s working, and you may have to change your game plan and try something new or different to make those fish bite once you locate them.

(John Phillips holds an array of awards including the 2012 Homer Circle Fishing Award from the American Sportfishing Association and the 2007 Legendary Communicator inducted into the National Fresh Water Hall of Fame. He has written more than 6,000 magazine articles and served as Outdoor Editor for the Birmingham Post-Herald for 24 years. Phillips is a founding member of the Professional Outdoor Media Association and an active member of the Southeastern Outdoors Press Association. The author of more than 100 books, you can learn more from his book, “Crappie: How to Catch Them Fall and Winter.)