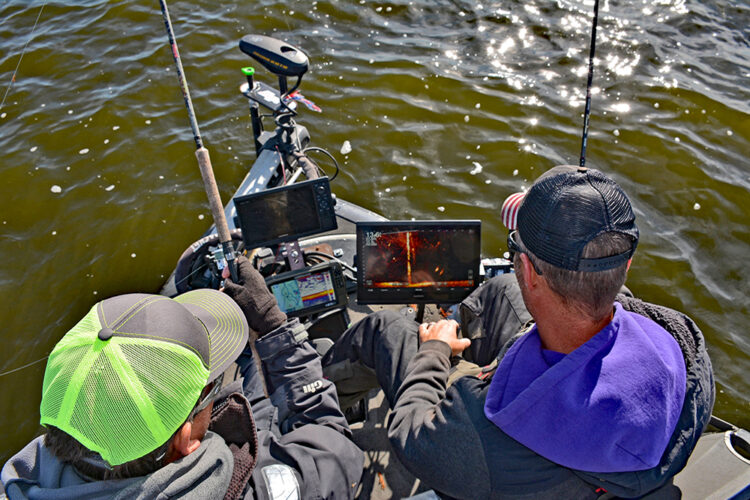 Jeremy Mattingly (right) from the “On the Hook” TV show says his Garmin LiveScope™
has taught he and other anglers a lot about crappie behavior. (Photo: Richard Hines)

No matter what you have heard, LiveScope™ or other live-imaging sonar systems, the new-fangled technology comes with a large learning curve. But with the new technology anglers are learning more about crappie behavior than anyone thought possible.

Last Fall Blue Bank Resort on Reelfoot Lake, along with the On the Hook Pursuit Channel TV Show hosted some of the country’s top crappie anglers. Anglers and outdoor writers alike shared new fishing techniques and discussed what everyone has learned about crappie behavior.

How many times have you heard, “Keep that jig moving or they will never see it.”

This is the first myth to bust. Every crappie pro agreed, you don’t have to keep your bait moving all the time.

Garrett Garner of Garner Guide Service said, “Crappie don’t require much jigging at all and depending on water clarity, when you get near the fish, just let it sit. That fish will make up his mind if he wants it or not.”

Kyler Beckmann of Kyler Beckmann’s Guide Service said, “You are better off, at least 90 percent of the time, stopping your bait just above the fish and holding it. Even when you think you are perfectly still, your body is still transferring natural movements down the rod continually moving bait ever so slightly. Think about it, baitfish don’t move in jerky or up and down movements. Suspended fish tend to hold unless something spooks them, so holding your rod as still as possible with only slight movements makes your bait appear more natural.”

What everyone observed is also supported by recent research on crappie behavior. Biologists found crappie tend to move in stop-and-go feeding patterns and while you assume every fish is on the constant lookout for food, not so with crappie. It turns out it is one of the few fish species that search for food only while paused and this helps explain why some crappie move up and stop briefly before taking a bait.

Not all guides use attractants 100 percent of the time. Every angler at the Bluebank Resort gathering was very consistent in saying that their success of using attractants, or not using them varies widely each day.

Matt Outlaw of Outlaws Guide Service said, “Adding fish attractants during slow days has made it worthwhile”. Many days Outlaw described how fish would his bait, but would not commit but once he added attractant, it was just enough to entice crappie to bite”.

Garner has been using a variety of attractants for years but was really impressed with JB’s Fish Sauce. Garner said, since switching to JB’s, “I don’t have to rebait after every fish, and this has been a time saver when the bite is on”.

Garner depends on attractant when the bite slows and says overall, it has not only increased hookups, but it seems to attract larger crappie.

Mark Ridl, long time crappie angler and owner of Cornfield Fishing Gear said, “On a recent trip we were trying for a hookup and used everything from jigs to minnows with very little success, however, once we began using attractants, the bite was on”.

Thanks to the crappie’s larger eyes, they are well adapted to feeding in murky water which gives them a slight advantage over other fish. In addition, crappie also have a developed olfactory system and using attractants also helps crappie to detect your bait at greater distances.

Every guide agreed that having bait compatible jigs and attractants such as JB’s Fish Sauce gives anglers an added advantage particularly when waters are slightly turbid.

Do Crappie Feed Down?

Many anglers believe crappie will only feed up and the experts say, given the choice, it appears they do prefer going up for any offering. However, live sonar systems have revealed they will definitely feed down. Take a school of crappie, there appears to a pecking order, and everyone said, it seems like the best fish are always on top of the brush. The top fish is no doubt waiting for baitfish to approach the brush so keep this in mind when you drop the first jig.

Both Garner and Beckmann said crappie will feed down, but it is much more difficult to hook them.

Beckmann added, “I have watched crappie chase bait down, but you are always better off staying above the fish” If you happen to bump a fish with your line or drop shot, you run the risk of spooking not just one, but the entire school.

Garner added if that happens, “Its game over!”

Crappie are more particular than anyone ever imagined and sometimes just downright lazy,
so you need an incentive to get them off the couch!

Control Your Boat, or Else!

Sitting over crappie is entirely different than working the bank and casting to bass. Crappie anglers are using stealth and precision to place the boat right over the fish. And most guides collectively agree that boat control separates average guys from top tier anglers.

Ridl said, “Expert boat control has moved crappie fishing into the same style as bass fishing…now we are on the hunt, fishing to specific fish, and if you don’t have good boat control you will lose out.”

Outlaw said, “Typically wind is never a fisherman’s friend, but I like just enough to break up the surface.”

However, as wind increases, your boat control becomes more difficult. Anglers should keep just enough angle, so waves are not slapping straight on the side of the boat while maintaining your position over the brush pile.

A little wind seems to settle fish down, which is good when heavy pressure is on.

Remember, even in 20 feet of water, when fish look up, your boat does stand out, so a slight chop is welcome.

While live sonar has helped anglers catch more crappie it has also given some insight into crappie behavior and allowing anglers to adjust their strategy.

(Richard Hines is a Wildlife Biologist, book author and award winning freelance outdoor writer and photographer. Since 1985, Hines has published hundreds of articles on hunting, fishing, conservation, and natural history. Hines is President of the Tennessee Outdoor Writers Association and serves on the Board of Directors of the Southeastern Outdoor Press Association.)