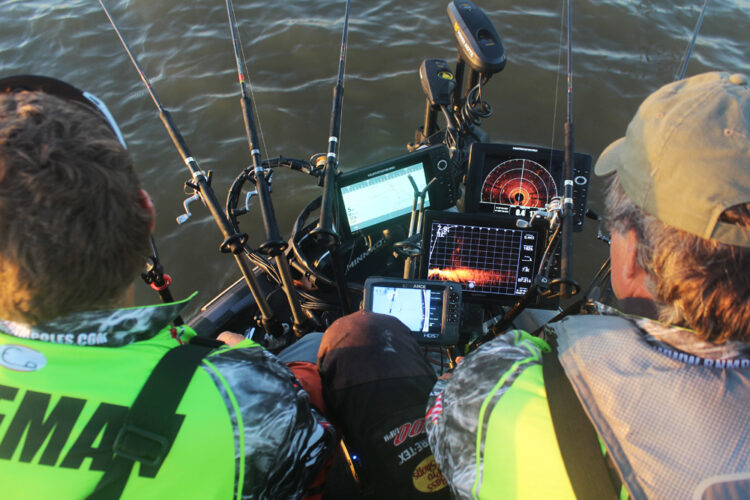 Kansas biologists say their research indicates the use of live-imaging sonar has relatively little impact on crappie catch rates by average anglers. They admit, however, they would like to do more research to measure effects by advanced anglers, such as professional crappie tournament anglers. (Photo: Richard Simms)

There are several live-imaging sonar (LIS) products on the market now, but the Garmin LiveScope™ started the craze. Ever since it hit the market in 2018, crappie anglers everywhere have been debating pros and cons of the advanced technology. Some are concerned it will adversely impact fish populations and have even suggested tighter regulations – or at least “self-imposed” limits by anglers – as a result.

However, until now fisheries biologists have held off expressing opinions. Generally, they say there is no evidence the technology is having a negative effect. All have qualified their statements, however, saying no one has really researched it.

Now, however, fisheries biologists with the Kansas Dept. of Wildlife and Parks (KDWP) have now done it, developing a first-of-its-kind study of the effectiveness of LIS.

“As a conservation-based organization, we always want to look to science and ask ourselves, ‘What is the data telling us?’” said KDWP Fisheries biologist, Ben Neely. “But this technology is just new enough, that these data really didn’t exist. That’s when we decided we needed to explore this further and develop the study. It’s taken off like wildfire in the conservation community ever since.”

KDWP Fisheries staff opted to conduct a controlled and replicated experiment to assess the influence of LIS on catch of winter crappie ­– Kansas’ second-most sought-after sportfish. Specifically, the project was designed to examine LIS impacts on “casual weekend anglers” fishing unfamiliar water on a weekend trip.

In early December 2021, a total of 32 individuals from KDWP’s Fisheries and Wildlife divisions, and Kansas State University took part in a two-week experiment at Cedar Bluff Reservoir. Anglers were randomly partnered up and instructed to fish for seven hours on either the north or south sides of the lake, and either with or without the aid of LIS. The next day, each team switched sides and use of equipment; This resulted in a total of 16 controlled “samples.” The results were unexpected.

When other species of fish were counted in the study, teams not using LIS averaged 12.9 fish per day, compared to 14.4 per fish per day when LIS was used.

According to the news release by KDWP, the data collected demonstrated that while LIS may improve angler catch and size of crappie by casual weekend anglers, overall differences were statistically minimal. And maybe more importantly, the data suggests an overall low risk of long-term damage to crappie populations as a result of LIS.

However, anglers with more experience and expertise using LIS to target crappie were not considered in this study. As fisheries biologists are always prone to do, they said future studies are needed. Kansas biologists are considering additional research that can measure the abilities of more LIS-experienced anglers to further inform future management of crappie in Kansas.

“Balancing sociological needs with biological needs is at the heart of nearly everything we do at KDWP,” said KDWP Secretary Brad Loveless. “This study is a fine example of how our staff continue to operate off of the best-available data to make science-based decisions that benefit not only the resource, but our users. I’m confident this study will be just one of many that the conservation industry looks to, as our talented staff in Kansas continue to pave the way in fisheries research and management.”

To learn more about this study, you can watch this audio/video presentation to KDWP Commission by Neely here:

For more on fishing in Kansas, visit their website..