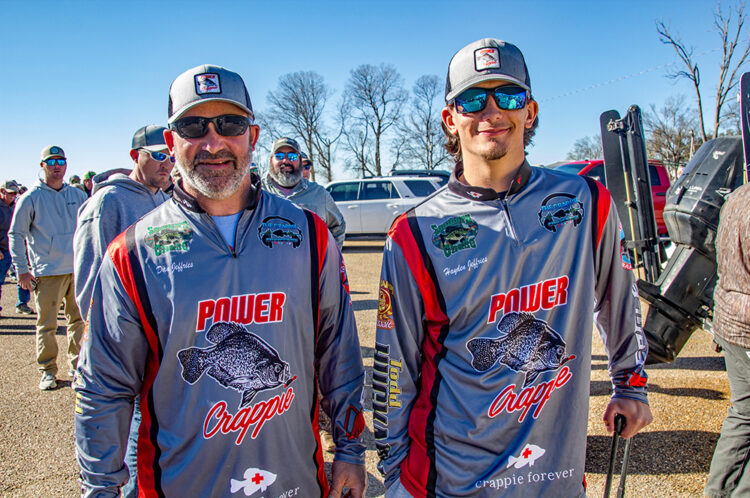 Since winning their first crappie tournament fishing with the Magnolia Crappie Club in Mississippi, Dan Jeffries and his son, Hayden, have quickly become a force to be reckoned with.

(Editor’s Note: If you missed Part 1 of this in-depth interview with Dan and Hayden Jeffries – one of the hottest professional crappie teams in the country, you will find it here.)

“I started using the live sonar after being told it was the future of crappie,” said 21-year-old Hayden Jeffries. “I spent countless hours learning how to use it only to enjoy catching fish. We never dreamed or expected to be where we are today.

“We were out there having fun trying to learn how to catch a few fish. After learning what I was doing, we fished a Magnolia Crappie Club tournament on Barnett two seasons ago and finished 5th,” continued Hayden. “We figured we could be competitive, so we decided to fish with MCC for the rest of that season. The next tournament went well, and then we made it to Grenada Lake; we weighed one fish. We had our first win in the spring at Sardis Lake the following season. That lit a fire that we have yet to be able to control. Since that tournament, we’ve been pressing as hard as possible to become more competitive utilizing live sonar.”

Asked about the importance of a good partner, Hayden said, “Dad is a vital part of our success as a team. He is so much more than a net man. He keeps me focused all day while he keeps the rest of the boat running. I catch a fish, turn around, hand him a rod and the fish, pick up a new rod, and go back fishing. That’s called time management. My dad is the calming voice that keeps me from over-reacting. He does all of the culling, retying, and weighing of fish. We know exactly where we stand at all times of the day. I consider us the total team; we work excellent together.”

As for Hayden’s plans for the future?

“I’m not sure where I’m headed next,” he said. “My main goal is to somehow fish for a living. Once I finish college – I’m in my final semester – I plan to fish all of the major trails and start my guide service. I want to expand my crappie guide service. I’m just going to take life as it comes and see what happens. I enjoy making memories with my dad. My lifelong dream is to own a fishing tackle specialty store, like Grizzly Jig.”

Hayden’s main tip for other anglers?

“The biggest tip I can give to other anglers is to dig deeper, thoroughly investigate and research your technique. Never think that you know what you are doing because the fish will prove that wrong quickly. I tell people that this crappie fishing game is more mental than a skill. You have to have the right mentality, temperament, and attitude. Look into the tiny details that most people may ignore. Time management is critical; fish clean and efficient. Make every bite count.”

Like most pro’s, the duo says they couldn’t be where they are without a laundry list of great sponsors, including Car Zone USA, Southern Chase Crappie Jigs, Crappie Forever, BeatDown Outdoor Products, Custom Lithium Batteries by (Michael Sylvester) The Mad Scientist, Hook & Bullet Sunglasses, and Power Crappie – Home of Todd Huckabee Rods.

“Our sponsors have made it possible for me and my dad to fish efficiently and productively,” said Hayden. “I want to thank Brad Chappell with The Crappie Connection, especially; he’s been my mentor and friend for quite a while. Brad has helped me grow not only as a young man but also as a tournament fisherman.”

Hayden adds, however, that, “My last and utmost thank you would have to be to my mother, Katie. She’s been our number one supporter from day one. I have two brothers; she has shown nothing but support to all of us. It’s been an awesome adventure around our house.”

Hayden and Dan will control their destiny for a long time, from the looks of things. Hard work, planning, modesty, staying humble, and being respectable are significant parts of their game plan. If your kids need a mentor, I can’t think of a better person to choose than Hayden. Being my age, I select Dan; he’s cool, calm, and the essence of what the Magnolia Crappie Club is about – Family, Fishing, and Fun.

(Bernard Williams is a noted outdoor writer from Jackson, Mississippi. Williams is also the vice-president of the well-known Magnolia Crappie Club.)