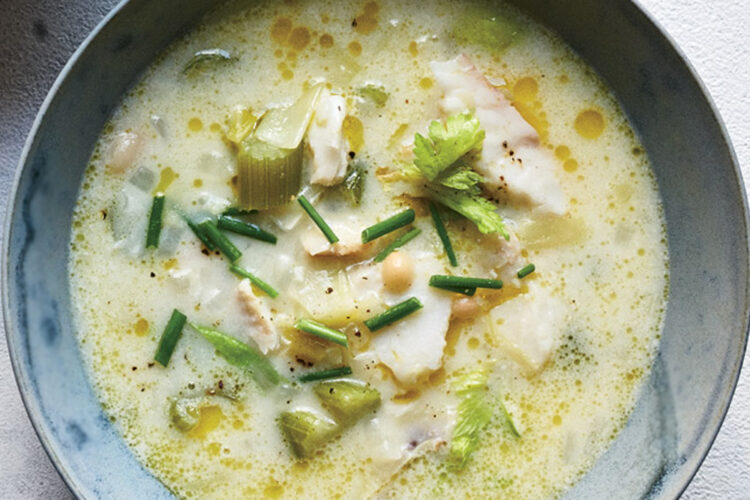 When most of us think of chowder, the New England-style comes to mind. The phonetic variant, “chowda”, is believed to have originated in Newfoundland during the days when Breton fisherman tossed portions of the day’s catch into a large pot along with other available foods to make a seafood stew. Because this is CrappieNow, we’re going to make crappie chowder.

It’s uncertain where the term “chowder” came from but it’s been suggested that it is the French word chaudière, the type of pot used to cook the stew. Commonly, chowder is a seafood or vegetable stew (or a thickened soup), often made with milk or cream served with crackers that are broken into the chowder as a thickener. Some varieties are traditionally thickened with crushed ship biscuits. There are numerous varieties of chowders ranging from New England clam, corn, potato and fish chowders. Here’s our recipe with crappies as the main meat.

Saute celery and onion in butter until tender. Cook potatoes in a separate pan with enough water to boil. Combine celery, onions, butter and potatoes in 1 big pan and then add soup, milk and fish. Simmer together until the fish flakes, but do not boil or milk will curdle.

Celery Through the Centuries

While the origination of the name chowder is uncertain, celery has a more storied past that’s a lot longer. Let’s jump on the way-back machine for umpteen thousand years to get a taste of celery’s history. When old king Tut died in 1323 BC his funerary contained garlands with celery – a tasty homage. Moving forward to the Greeks, the ancient Thessalians under Achilles’ command grazed their horses on wild celery. Take another big leap forward to the 1600s AD when the name celery entered the English language. By then the veggie had made its way from the Mediterranean Basin to Northern Europe. Along the way it was cultivated in North Africa, Siberia, Southwest Asia and North America.

FYI: Celery salt is ground celery seeds mixed with salt. In 2019, celery juice was hyped as a “detoxifier”. All it did for certain was to increase the price of celery.

Linguine is like thin flattened spaghetti. In Italy where this pasta was developed, linguine means “little tongues.” It is often served with seafood or pesto. Our seafood in this case, is – you guessed it – crappie.

Cook linguine according to directions on its package and set aside. Heat olive oil on medium-high heat in a stove top pan and add crappie fillets. Cook about 4 minutes and then add garlic and pepper. Add wine. Reduce wine for about 30 seconds. Drain cooked linguine into crappie. Remove to a dish and sprinkle with cheese and a dash of hot sauce, if desired. Garnish with parsley. Enjoy!