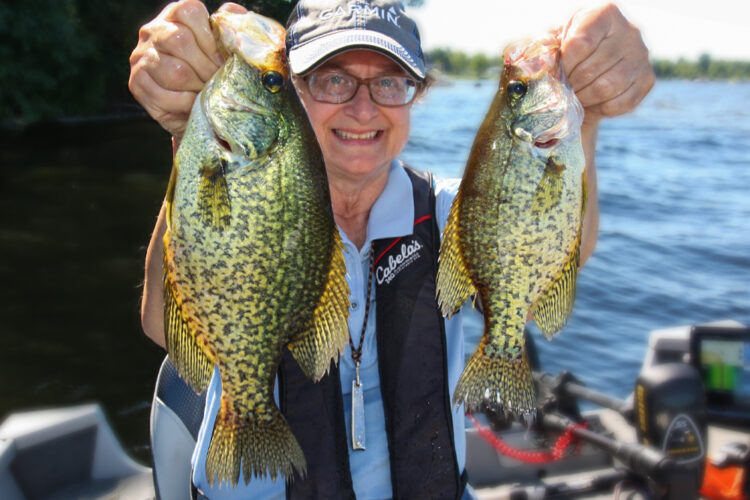 Conneaut Lake in northwestern Pennsylvania is my favorite lake for black crappies. The best time to fish it is mid-to late summer when many anglers are complaining about the slow crappie bite throughout the region.

This naturally-formed lake came into existence roughly nearly 12,000 years ago at the end of the last ice age. A large block of ice broke off from the retreating glacier; when the ice melted it left a large depression that eventually became Conneaut Lake.

The maximum depth of Conneaut is 72 feet, although most of the lake is considerably shallower. Multiple basins are separated by submerged humps and ridges which enhance offshore fishing. Thick beds of milfoil, coontail, and eel grass cover flats and main lake points to a depth of about 12 feet.

The lake has been known to produce BIG fish, including two Pennsylvania State Records – a 54-pound 3-ounce muskellunge and 4-pound white bass. Largemouth and smallmouth in excess of 7 pounds have also been caught from this lake.

Sounds interesting, doesn’t it? So don’t be shocked that Conneaut Lake is just 925 surface acres. Small by southern reservoir standards, yes, but Conneaut features a dynamite fishery for many species.

Let’s be clear on this – Conneaut Lake does not produce unusually large black crappies. Nor will you find mega schools of crappies roaming offshore waters. Instead, you will find groups of crappies in specific habitat.

Conneaut gives up nice-size crappies during the heat of the summer to anglers with ordinary sonar units on their boats – no live-scanning sonar of any kind is required. Use a basic fish-finder to identify the outside edge of deep weed growth, and you are all set to start fishing. Well, almost – there are a couple more factors to consider, which I’ll address in minute.

Although a very good lake for crappies, it is even a better lake for big summer, regularly giving up 8 to 11-inch ‘gills. And I certainly don’t want to neglect the pumpkinseeds, having caught ‘seeds to 10 inches in this lake during the summer. These are huge panfish for our neck of the woods.

While Conneaut crappies are generally found on deep weedlines in the summer, big bluegills and pumpkinseeds are feeding on hard-bottom points and humps in depths from 18 to 28 feet. That’s a story for another time. Back to crappies.

Summertime crappies are not uniformly distributed along the weed edge. Rather crappies tend to concentrate on weed-covered points and flats that gradually give way to deeper, open water – as opposed to weedbeds which stop abruptly on steep slopes.

Under normal conditions, you can use polarized sunglasses to see where the weed edges sort of fade away, going from very thick vegetation to less thick and finally to sporadic clumps. However, heavy boat traffic, weed cutting and influx of storm water can reduce visibility.

Conneaut Lake is an exceptionally busy resort and party lake, completely ringed by summer homes. I never recommend fishing Conneaut on a summer weekend. Reserve Conneaut visits for weekdays. Also, due to the incredible traffic on the lake for weeks around the 4th of July holiday, do not plan any outing to Conneaut before the last week of July.

The lake association funds a weed cutter which operates all summer long. When the scissor-like blades cut and rip aquatic vegetation in a particular area, I’ve learned the crappies will evacuate that site until the vegetation begins growing back. When you see the weed cutter at work, look for different areas to fish.

From my point of view, crappie presentation on Conneaut is simple casting. The weed edges are so erratic that any type of slow trolling will net more strands of vegetation on your lure than fish.

I position my boat in about 15 feet of water, and make long casts beyond the deep weed edge towards shore. Then swim the jig back, initially keeping rod tip high to stay above thicker and taller weeds, but then lowering the rod tip and slowing the retrieve as the weeds thin out the closer the lure comes to my boat. Bringing the jig from shallow to deeper water usually pays off better than parallel casting the weed edge.

My most effective colors are white, white/pink firetail, silver sparkle, natural shad, chartreuse sparkle and any greenish body with a chartreuse tail.

I also toss a lot of hand-tied hair jigs. Sometimes I play around with small shad-like crankbaits in an attempt to catch larger crappie. However, eight times out of ten, I lose the crank to a northern pike.

When the crappie bite is slow, I break out my back-up rod rigged with a 1/32-ounce jig suspended 12 to 20 inches below a weighed bobber. The jig body is a Bobby Garland Baby Shad heavily scented with Slab Jelly. This is retrieved slowly with long pauses.

In addition to fishing, visitors will find a variety of venues typical of a resort community. Not so typical, however, is a lake tour on the double decker Barbra J sternwheel paddle boat, with narrative about the history of the lake provided by the first mate.

Perhaps the most interesting place to visit is the Conneaut Lake Area Historical Society Museum providing a history of the lake, from the ice age to modern day. On display are partial skeletal remains of mastodons and wooly mammoths recovered from the lake bottom. Also restored and displayed is the Liberty the Second racing boat which was lost in 1922 when it flipped and sank, but eventually located and recovered 63 years later from deep water.

Lodging options range from camping and small motels near the lake to larger chain hotels eight miles east on US Route 322 at the I-79 interchange. Let’s not forget the magnificent turn-of-the-century Hotel Conneaut on the lakeshore which, according to local lore and paranormal experts, is haunted by the spirit of female guest who died in her room in a hotel fire on her wedding night.

Complete information on lodging and activities in and around Conneaut Lake may be found on the Crawford County Convention and Visitors Bureau website at or by calling 814-333-1258.