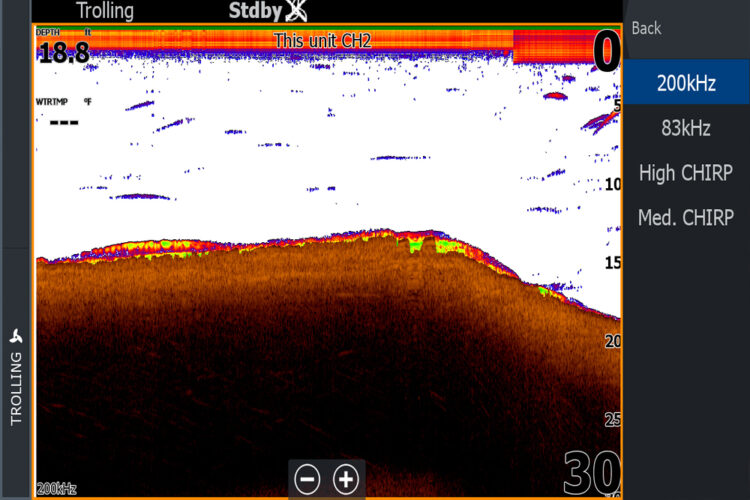 It seems like the surge of anglers buying units just so they can have live-imaging sonar (LIS) is staggering and the trend in new sonar purchases is for getting LIS in the boat.

But the days of traditional fish finding technology is far from over.

Traditional 2D sonar transmitting from a fish finder is a single frequency being pinged. These frequencies are low, medium and high. Low (50kHz) is mostly used in water depth of greater 300 feet with a wide cone of 27 degrees commonly used in offshore fishing. Fresh water anglers mostly use medium (83kHz) with a medium size, 20-degree cone and high (200kHz) with a narrow 13-degree cone.

CHIRP (Compressed High Intensity Radar Pulse) on the other hand sends out numerous sonar pulses with a combination of different pulses. Similar to traditional 2D sonar, CHIRP sonar comes in low, medium and high frequencies. Again. low CHIRP is for deeper water situations while freshwater anglers and using medium CHIRP (95-155kHz) with a cone size of 16- to 24-degrees or high CHIRP (150-250kHz) with a 11- to 16-degrees. Note that CHIRP frequencies and cone sizes vary according to the electronics manufacture.

Do you see the trend here? As new sonar technology is released the older sonar technology becomes more affordable, but marine electronics companies like Lowrance, Garmin, Humminbird and Raymarine continue to include the older technology. The cost of fish finders is based on the unit and transducer that have increased in sizes and technology advances.

The ideal solution for the angler is to utilize having multiple panels open with different sonar options for their unit. The number of panels and options for panels differ between marine electronics companies. If an angler has multiple units, use different frequencies to eliminate crosstalk (interference) between the units.

So don’t forsake the older technology quite yet. LIS is not currently designed to cover vast areas of water quickly. By quickly we are talking at idle speed or even faster. The good news is fish finders with LIS capabilities generally come with traditional 2D sonar or CHIRP sonar.