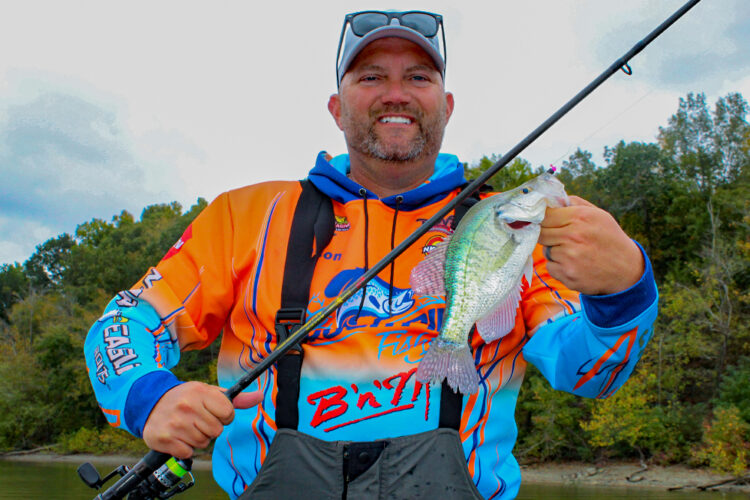 The notion that summer crappie always go deep just does not always hold true. Ask Ohio tournament competitor Jason Koesters, who finds plenty of shallow fish year-round on his home lakes and also on the road when he is competing, even in the South.

How good can the shallow bite be?

Just as good or better than the deep-water variety. Koesters and his former partner, Jake Hengstler, won a national championship in 2019 in the shallows while the remainder of the field fished deep.

“Mainly throughout the year, I am a shallow-water fisherman, whether it’s a home lake or a different lake that I’m going to tournament fish,” Koesters said. “I’m looking to find fish in eight feet or less of water. I’m trying to find brush, stumps, lily pads, docks, anything that I can find that’s going to provide shade and protection for crappie in shallow water.

“If I go to a lake like Old Hickory in Tennessee, where my old partner and myself won the Crappie USA Classic in 2019, we found some docks that had metal lifts in them. These metal lifts were in eight feet of water underneath these docks, and we were jigging a cork anywhere from a foot-and-a-half almost to the bottom at about seven feet.”

The practice came about out of necessity for the BrushPile Fishing pro staffer, who also counts B’n’M Poles, Crappie Magnet, Crappie Monster (nets), and Bob Denen, Safehouse Ministries as other primary sponsors. Most of the lakes near his home in New Bremen are shallow, and Koesters spent his formative fishing years acquiring the skills to catch them in skinny water, even when the water temps ramp up under the summer sun.

“Those lakes average five, six, maybe seven feet at the most,” Koesters said. “Since I started fishing probably 30 years ago, I’ve always caught them shallow. We catch them under a cork with a jig or a minnow in the lily pads, shaded cover, shaded docks in less than four or five feet of water.”

Only when Koesters began touring did he realize that a certain segment of the crappie population stayed shallow regardless of location. In addition to Old Hickory, he ventured to various places associated with deep-water fisheries, including Lake Cumberland in Kentucky, Lake Hartwell in South Carolina, and Grenada Lake in Mississippi. Instead of trying to adapt to the fish, Koesters put his strengths to work and enjoyed a certain degree of success on all those lakes.

“We went down to Lake Cumberland in Kentucky,” Koesters said. “It’s not known for shallow-water fish. People typically catch them 20 feet deep or more. We found a spot where the fish were literally in one or two feet. Other guys couldn’t believe that we were finding fish so shallow.”

Practicing their shallow-water craft, Koesters said, “We got a couple of seconds and finally won one there.”

The Classic victory on Old Hickory totally affirmed the idea, however. He and Jake located a productive shallow area near a deep creek channel and milked it for the tournament win.

“A lot of people thought we shot docks the whole time – and we did catch some fish shooting docks – but we fished the jig and cork most of the time,” Koesters said. “People couldn’t believe that we caught fish shallow. Just about everyone else was fishing deep. That was about the time that everyone had started using LiveScope and fishing deep all the time. We still beat them with the shallow technique, which was really fun.”

For the most part, Koesters keeps his presentation fairly simple. He primarily uses the B’n’M Richard Williams 12-foot rod and six- or eight-lb. line when he is fishing a cork around structure. Normally he uses 1/32 or 1/16 jigs heads paired with some type of Crappie Magnet, Bobby Garland, or Mr. Crappie plastic, keeping the profile small.

“Typically, I am going to start out with a cork and set it a foot deep down to about five feet deep,” he said. “I will adjust the depth to what the crappie want, where they are setting up in the water.”

On occasion, he will replace the plastic with a minnow.

“I will always carry minnows with me,” Koesters said. “There will be those days, especially in the summer time, when the crappie may not want a jig. They want some live bait, entice them just a little more. I’ll use a 1/32 or 1/16 jig head, no plastic, and put that minnow underneath the cork. That tends to trigger the bite.”

With this package in hand, he looks for specific shallow targets near deeper water. If the area features a channel that approaches the mouth of a cove or cut or comes close to a dock, more than likely crappie will feed there at some point during the day.

“I prefer docks,” he said. “Docks with pontoons, docks with lifts, docks with rocks or some combination. They tend to hold bigger crappie.  Some docks may not hold crappie, but if you see one with fishing poles hanging off of it, got a lift inside of it, potentially has brush around it, it’s going to hold crappie. I’m looking for a combination (of structure) typically.

Koesters added a crucial idea about finding crappie in those locations.

“I tend to go into the mouth of a cove and go to the first set of docks or first brushpile or rocks that I come to,” he said. “That’s where they are going. On Old Hickory (in the Crappie USA Classic), we had a dock like that that held 10 lbs. of crappie. It was the money dock.”

Koesters said his electronics units – he uses both Lowrance and Garmin live-imaging technology – provide a more efficient way to find such locations. He first eyeballs visible structure and then lets the electronics pinpoint underwater sanctuaries.

Regardless of the location or the presentation, Koesters firmly believes that crappie can be caught in just a few feet of water year-round.

“It’s a technique that can be used all over the country,” he said. “It works here in Ohio and it works when I’m on the road tournament fishing.”