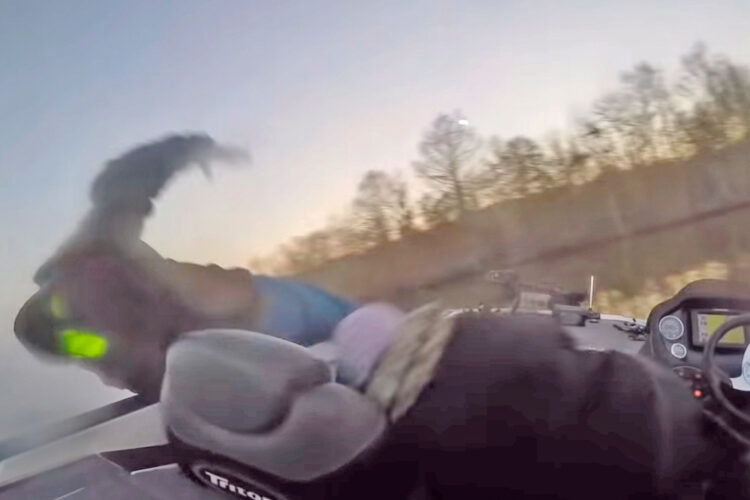 A screen grab from the GoPro video as Hunter Bland and his tournament partner were ejected from their boat at more than 50 mph. The video has been viewed nearly three million times and Bland has dedicated his life to sharing the message of boating safety.

It was January 14th, 2017, when Hunter Bland launched his boat to fish a college bass fishing tournament on Lake Seminole in Bainbridge, Georgia. As tournament rules require, he and his partner had life jackets on, navigational lights on and the engine cut-off device attached.

Just minutes later, while running more than 50 mph, Bland’s hydraulic steering came completely apart, spinning the boat and ejecting he and his partner, Conner Young, from the boat. Thanks to their safety gear, the pair were rescued and left the with only a few scratches and bruises.

Bland’s GoPro captured the incident and he posted in on YouTube to showcase how quickly things can go wrong. The video has been viewed nearly three million times so you may have seen it. But Bland hopes millions more will watch it as an illustration of how boating safety guidelines can ensure your chance of surviving a catastrophic accident like this one.

After receiving awards for safety outreach efforts, Bland recently shared his story on the Yamaha website.

He said that he is actually thankful for his boating accident.

“It taught me how quickly things can happen, and it uncovered my true passion in life – boating and water safety,” wrote Bland. “My goal now is to make sure people continue to enjoy recreating on the water, but also return safely to the dock to share those memories built together.”