CrappieNOW Senior Writer, Tim Huffman (left), pictured with Garry Mason, founder of the Legends of the
Outdoors organization after being presented the prestigious, Wade Bourne Communicator of the Year award.

SPRINGFIELD, Mo. – Tim Huffman, former Editor and now Senior Writer for CrappieNOW, was presented with the Wade Bourne Communicator of the Year award by the Legends of the Outdoors organization last month.

“What a great honor it was to receive the award,” said Huffman. “This special award from the Legends of the Outdoors was established as a tribute to Wade Bourne after he passed away in 2016. Wade was a great professional communicator, hunter, and fisherman. He was also a friend of mine, so the award means a lot to me on a personal level.”

Garry Mason, the founder of Legends of the Outdoors, said, “Tim has kept fishermen across the nation, especially those interested in the crappie industry, informed and aware for decades. He is very, very deserving.” 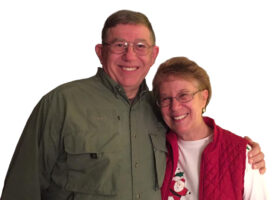 “My goal in writing and photography has always been to keep it simple, logical, and help readers catch more crappie,” said Huffman. “I’m not fancy or flashy, so it was a great surprise to have been selected for the award. It feels good because it’s a validation that I did a few things right along the way. I thank Garry Mason and the (Legends of the Outdoors board for this honor.”