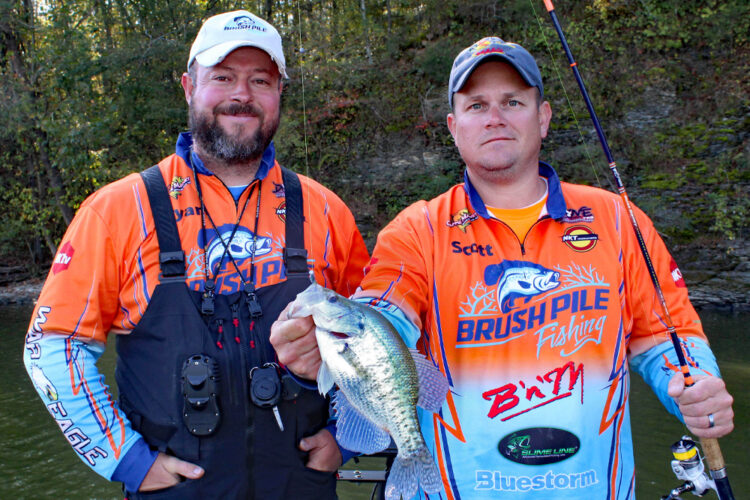 Crappie fishing possibilities are seemingly endless in Kentucky. From the mountain lakes in the eastern part of the state to the flatland impoundments farther west, crappie populations are thriving and provide options for both trophies and numbers.

Of course, THE Kentucky Lake, along with Dale Hollow are well-known crappie destinations, but those two famed and well-known fisheries are just the beginning of what crappie anglers can find in the Bluegrass State. Literally hundreds of the other Kentucky lakes feature excellent crappie fishing.

Kris Mann, pro staff manager for Crappie Magnet and Trout Magnet and also on the pro staffs of B’n’M Poles and Cornfield Fishing Gear, is a successful tournament pro who has caught fish from just about every crappie fishery in the state.

Mann, with help from other state crappie experts, provides an overview of a few bucket list Kentucky destinations that yield quality fish. The list begins with his home lake he has fished hundreds of times. The 8,200-acre Cave Run Lake is just 30 minutes away from Mann’s home in Wellington.

“I feel comfortable with Cave Run, growing up there, and having fished it so long,” said Mann. “As far as scenery is concerned, you’re not going to find a more beautiful lake with the foliage like it is now and on into the fall transition. That lake happens to be surrounded by the Daniel Boone National Forest, so it’s a very public-friendly lake for people who want to hunt, fish, duck hunt, all kinds of things to be done there.”

Cave Run is not the venue for trophy fish. Mann and others will go elsewhere if they are hoping for slabs two pounds or better.

“It’s not a place for monster crappie,” Mann said, “but some nice fish are caught there. We’ve had a pretty good number of 10- to 12-inch fish there this year. If I was going to just have a fun day out on the water that’s quick and fast and easy, then Cave Run is a great choice.”

Check out the Kentucky Fish and Wildlife Resources website for some added information about Cave Run and many other lakes. The state fisheries biologists place structure in lakes across the state and actually post coordinates.

While Mann can most frequently be found vertical jigging, he said one easy way to target Cave Run crappie is to tease suspended fish around the brush piles placed by the state with minnows or jigs under a slip cork.

“Use those coordinates and find the brush piles,” he said. “Those fish will be hanging around or suspended just above the brush piles in about 12 to 18 feet of water.”

If Kentucky visitors are looking for more than just keeper fish, Mann suggests staying in the eastern part of the state. While not as well-known as a big-fish destination as Dale Hollow, Lake Cumberland grows fish just as big. The lake is located in a triangle between Columbia, Somerset, and Monticello.

“Cumberland definitely is a consideration,” Mann said. “Cumberland offers some unique possibilities other than just the potential for a trophy.”

He noted the after-hours fishing that takes place with crappie hanging around the lights surrounding public boat docks. While fishing from the docks is usually prohibited, anglers in boats work the perimeter of such well-lit areas all across the lake and find plenty of fish.

The lake is not just a night-time hotspot, however. Some years ago, Cumberland was drained for work on Wolf Creek Dam, and a forest of sycamore trees grew up to 20 feet or more. Mann said the fish suspend in the trees and become a target for vertical jiggers.

The water clarity on Cumberland demands a finesse presentation, according to Mann. Visibility up to eight feet is not uncommon in the summer months, and Mann suggests downsizing to a bait like the diminutive Trout Magnet and also using two- or four-lb. test line with a fluorocarbon leader.

“The black crappie in Cumberland are nomadic,” Mann said, “so be prepared to stay on the move. You might fail to locate fish on one stop and go two miles up the lake and whack ‘em. Stay on the move until you find them.

“It’s definitely a trophy fish destination with a lot of fish over two pounds up to 2.5 and 2.75. I think it’s on the map now because of the tournaments held there the last several years.”

Mann is not alone in touting Cumberland as a place that grows trophy fish. Bowling Green resident Brad Bowles, a conservation officer with Kentucky Fish and Wildlife, echoes similar thoughts.

“If I couldn’t go to Dale Hollow, then my choice among the other Kentucky lakes for big fish would definitely be Cumberland,” Bowles said.

Moving across the state, another lake on the Cumberland River system also gets high marks for bigger fish. Lake Barkley, though often overshadowed by nearby Kentucky Lake, features a wealth of crappie potential.

“I don’t know why, sitting right beside Kentucky Lake, that it doesn’t get more pressure,” Mann said. “There’s plenty of crappie fishermen down that way but not nearly the number of fishermen that you would think. The numbers of crappie are there, just a great place to fish.”

Local tournament competitor Dean McCoy, who lives near Calvert City, KY, said he’s fished Barkley for years with good success. He points to the many feeder creeks that intersect with the main river, almost all of which hold crappie.

“It’s shallow getting into some of them, especially after they pull the water down in the winter,” McCoy said. “Most have defined creek channels with ledges and some humps that hold fish. I’ve caught fish for years in those creeks in the fall.”

“I’m either vertical jigging or pitching and casting to brush piles or stake beds,” he said. “The fish are starting to relate to structure, not suspended like they were earlier in the year. The trolling and spider-rigging bite for me is just not as strong as it is in the pre-spawn or the post-spawn periods.”

Mann said to expect to catch at least a few two-pounders from Barkley with a seven-fish limit of 1.75-lb. crappie needed to win most tournaments, and any number of techniques will catch them.

“Pick your poison,” he said. “You can long line, you can pull crankbaits or you can vertical jig. You can fish shallow, intermediate, or deep. It has a healthy population of both black and white crappie.”

For stockpiling crappie filets in the freezer, both Mann and McCoy point to Green River Lake near Columbia, KY. Green River is perhaps Kentucky’s ultimate producer of sheer numbers of fish.

“Green River is by far the best fishery in what I would consider the central part of the state,” Mann said. “By no means is it a trophy fish destination, but it definitely is a numbers lake.”

Added McCoy, “If you want to take a kid or a family fishing, you can catch crappie at Green River until you’re blue in the face.”

McCoy said he has caught most of his fish at Green River by pulling lures, either jigs or crankbaits, but now prefers to single-pole vertical jig over the many brush piles found there. Mann takes a similar approach with one pole in hand.

“You can pull up on a spot and literally see dozens of fish, if not more, on a single brush pile,” he said. “You can pick them off vertical jigging or by pitching a jig to them.”

“We have a lot to choose from, some better than others, but all potentially quality fishing.”
~ Dean McCoy, Kentucky crappie tournament angler

If the aforementioned lakes don’t satisfy any angler’s thirst for Kentucky crappie, many more options await exploration. Mann mentions the many creeks that feed the Ohio River on Kentucky’s northern border as overlooked places to fish. For a more intimate setting, he said Taylorsville Lake, located just south of Louisville and filling to about 3,000 acres, provides great numbers of crappie in much the same way as Green River.

“We have a lot to choose from, some better than others, but all potentially quality fishing,” McCoy said.

He emphasized the point that most of the bigger Kentucky lakes are managed by the Corp of Engineers and draw down the lakes starting in late summer or early fall for flood control. The drawdown, some of them as much as 30 feet or more, makes for dangerous boating by exposing wood and rocky structure. On the other hand, the drawdowns concentrate the fish and make them easier to catch.

Mann also noted that the transition from summer and fall fishing can be tough. In fact, he labeled it “the toughest bite of the year” unless weather changes bring cooler temps and rain into the state.

“If you have a rainy season and have plenty of oxygenated water, then the fishing can be good, but if it’s stale with very little rain, those fish get cranky,” Mann said.

Regardless of the destination, another quality crappie lake is just around the corner in Kentucky. Mann said, “Just pick your poison. It’s hard to go wrong picking a crappie destination in the Bluegrass State.”