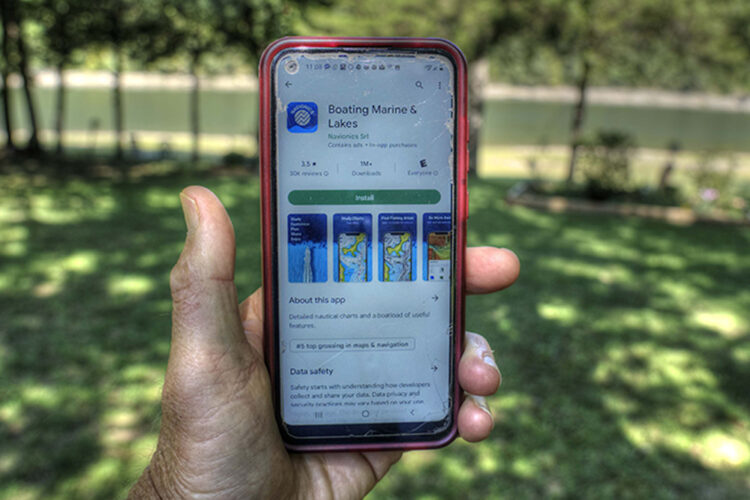 Anglers can use their mobile devices headed to the lake or on the water with
apps available in Android or iOS systems. (Photo by Brad Wiegmann).

As the saying goes, “There’s an App for that.”

So, it should come as no surprise to find out boating, navigation or fishing apps available for Android or iOS (Apple) operating systems for mobile devices. What is a surprise is how advanced these apps are when it comes to charting, overlays, map options and daily updates.

Doing a quick search will get you to boating, navigation or fishing apps. Navionics Boating App and Lowrance Fishing & Navigation are two popular apps with some similar features and options. We’ll use the Navionics app as a reference. Note that these apps with advance options are subscription based while some app companies may offer a basic feature app with mapping only. Mapping apps typically require Wi-Fi, internet signal or a cellular plan, however, limited map viewing is possible when offline

Charts available include Nautical, Sonarchart and U.S. Government Charts including NOAA Charts. Nautical Chart is a cartographic reference for anglers that include most bodies of water. Other details like local navigation aids, nearby marine services and depth contours will be found under charts. Navionics app includes SonarChart produce high definition with one foot detail contour for easy identification of fishing areas.

Here’s the good stuff. Boating App can produce imagery of Satellite Imagery with Sonarcharts Shading overlay showing an enhanced awareness of what is below and above the waterline with shades of varying blue from a top-down view. This view is by far the best for any angler going to a new body of water wanting to get an overview of that lake or river. Next Relief Shade similar to overlay, but uses color and shadow for imaging. Sonar Imagery imaging produces a view showing bottom hardness in vivid color, but is hard to decipher or look at for any period of time.

Use your mobile devices for mapping and more!

What this app does is allow the angler to customize their view to focus on details related to fishing. Highlighting shallow areas allows the angler to shade your preferred depth to target deeper ledges or dangerous shallow areas. Anglers can also adjust contour density so any overlapping contour lines are spaced out by lowering the density level of the chart. Plus, anglers can select a fishing range of depth to highlight areas were fishing maybe located quickly at a glance.

In addition to these apps for mobile devices these can also be connected to a tablet. To do that the user has to connect directly through a router with Wi-Fi along with a paid subscription. The best part about this is being able to share sonar logs between devices.