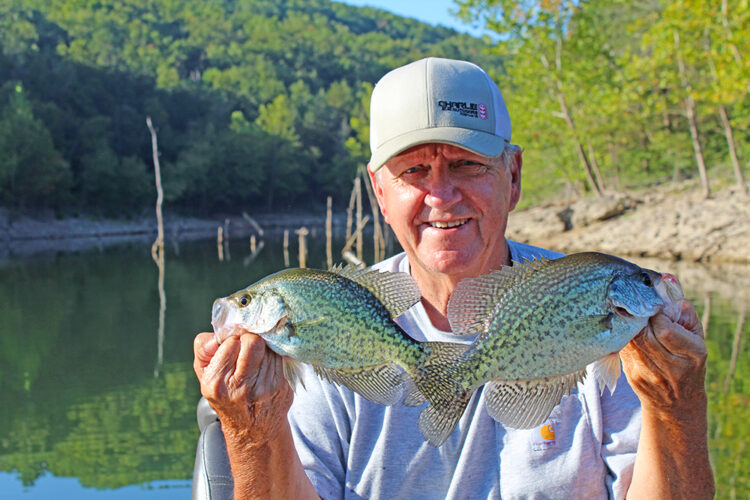 Check out the background and it is easy to see why Missouri’s Table Rock Lake holds great numbers of crappie. When the U.S. Army Corps of Engineers created the lake in 1958, it left all of the standing timber untouched. (Photo: Richard Simms)

Larry Cloud brought the boat off plane 300 yards away from the waypoint on his electronics and I wondered why he backed it down so early. A few seconds later the motor went “Thump,” and I saw the underwater treetop go by. I glanced at the depth finder and was amazed to see we were still in 35 feet of water.

“You can find plenty of structure on Table Rock Lake,” Cloud said with a smile. “They didn’t cut anything when they built the lake.”

I was visiting the area for the annual conference of the Association of Great Lakes Outdoor Writers. As I looked out at the treetops sticking above the water everywhere, I wondered how Cloud figured out which trees held crappie and which ones didn’t. The answer, of course, was live imaging sonar (LIS).

I, admittedly, am not a fan of staring at a screen and playing “video games” with crappie. So, I was relieved when Cloud simply used his LIS to locate crappie on a specific tree, but then he backed off and fished normally, as if he didn’t have LIS.

“I never can find my jig very good on it,” he said. “Sometimes I can, but not very often. I just find trees holding fish and then fish ’em like I normally would.”

I liked that. Then I liked it even more when my line went “thump” and I set the hook on my first healthy Table Rock crappie.

Cloud says Table Rock isn’t necessarily a producer of big crappie. But you would never know it by the Mr. Crappie Expo Invitational in October. Winners Hayden and Dan Jeffries boated 21 crappie weighing 34.88 pounds to win $100,000. At least 25 teams boated more than 25 pounds of crappie.

Ours was a beautiful morning on a beautiful lake. But more importantly Cloud shared with me the story of Charlie 22 Outdoors.

In 1968 Cloud served in the 379th Transportation Company in Vietnam.

“We hauled ammo and JP4 (jet fuel) out to fire bases,” said Cloud. “We took a lot of sniper fire. Almost everyone who was in combat or out in the bush in Vietnam had PTSD at some time.”

Cloud said he was lucky. He had a wise and understanding wife who was his support system IN dealing with his own bouts of PTSD. But not every Veteran, then or now, is lucky enough to have that kind of support. That’s why he works now supporting Charlie 22 Outdoors.

The organization’s mission is clear – “To provide outdoor activities to our nation’s veterans, and their families, with the goal of showing them there is hope, love, and a personal meaning in God’s grace.”

Charlie 22 provides all its hosted events free of charge, covering all expenses including travel, lodging, meals, tags and licenses.

Cloud said he first crossed paths with Charlie 22 at a Veterans Week held annually in Branson, Missouri. He said one thing in particular inspired him to become involved.

“The one thing that sets Charlie 22 apart is the guy who runs it,” said Cloud. “He runs this whole show out of a wheelchair and I was just inspired by what he is doing and the progress he was making.”

Charlie 22 Executive Director Scott Hettinger has been a school teacher, coach and author. Now he is seeing a dream come true in a ministry to veterans.

Every year Hettinger and others are involved in the annual Branson Veterans Week, to be held this year Nov. 5-11.

Plus, for the crappie anglers, Table Rock Lake is just a short drive away. But even if you’re not there, you can still support Charlie 22 Outdoors by donating on their web page. Larry Cloud would appreciate it.

(Capt. Richard Simms is the Editor of CrappieNOW magazine as well as a “semi-retired,” fishing guide on the Tennessee River and owner of Scenic City Fishing Charters. Formerly he was a game warden for the Tennessee Wildlife Resources Agency before becoming a photographer and PR guy for TWRA. That lead to a 30-year career as a broadcast journalist and freelance outdoor writer. Check out his book, “An Outdoor State of Mind.”)