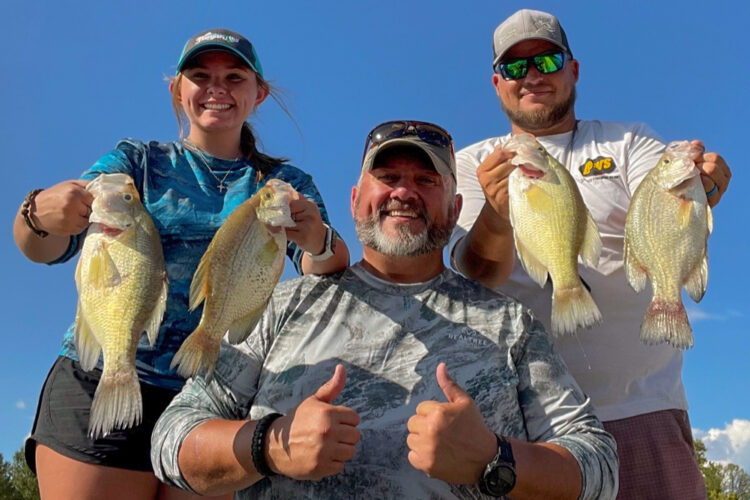 Lindsey Lucas, her Dad, Kody Lucas and Guide Jordan Issacs show off some of the crappie
caught on Bull Shoals Lake recently. Unfortunately, not pictured is “The one that got away.”

The Reel Deal: The One That Got Away

Every fisherman, or woman, has a story about “The one that got away.”

You can’t fish without having experienced the heartbreaking loss of what you felt like might have been a true trophy.

It happened to me most recently while attending the annual conference of the Association of Great Lakes Outdoor Writers (AGLOW) in Branson, Missouri. During the conference my dad and I were lucky enough to fish with Jordan Isaacs with Freedom Fishing Guide Service.

Fishing on Bull Shoals Lake we were hoping to catch some bass and crappie, mainly crappie though. Even though we had a cold front coming in that day, it was extremely hot outside, a perfect day for shorts and a ball cap.

We couldn’t get on the water with Jordan until 10:30 in the morning and it was so hot Dad and I were skeptical as to how the fishing would be. Jordan took us to a cliff with an underwater log. The depth finder revealed tons of big crappie schooled up near it. We shoot some casts out by that log slowly reeling and jigging, then I feel it. I set the hook just to find out I got caught on the bottom, not what I was hoping for. Then I look over and see my dad, Kody, reeling in a nice crappie. The father-daughter competition was on now!

One fish, two fish, we were tied. After trying a little bit longer, we moved to another spot Jordan had in mind. We get to the spot, and Jordan and I start telling jokes and picking on one another, I quickly realized this trip was not only action-packed with catching fish but also full of fun.

Dad decides to break out the video camera. After catching a good number of crappie, some up to 16-inches, we decided to give crankbaits a try and see if we can catch some bass.

After not even ten minutes of trolling with crankbaits, I hook a four-pound bass. It fought like crazy and jumped out of the water once shaking its head back and forth. I still had him until he jumped out of the water a second time just to spit the bait out of its mouth. We experienced the high of highs and the low of lows all in about a single minute.

We had about 20 minutes before we had to head back for dinner, Jordan decided to continue to use crankbaits while headed to a certain spot. Once we got to the special spot, he decided to let me try something I’d never tried before. He had me try finesse fishing, where you take a short rubber worm with a jig head, cast it along the rocks, and let it sink to the bottom. Then you slowly tug it a time or two while barely reeling to keep it on the bottom. After a couple of casts, I feel something and set the hook, just to see a nice-sized bluegill do a flip about a foot under the water. Just as I thought it was just a bluegill, I see this huge bass come from the depths of the lake and swallow the bluegill whole, startling all of us.

As the huge bass tried to take the bluegill back down deep under our boat, Jordan and Dad were giving me advice and trying to keep me calm. I had never seen such a bass as what I have on the end of my line at this very moment, and I quickly realize this bass will dwarf my personal best bass of six pounds. Now the drag is going, the camera Is rolling, Jordan is getting the net and I’m thinking, “This can’t get any better.”

Suddenly, I feel the fish stop fighting, I know what that means. I look at my dad, he looks at me and we both look to see that bluegill floating up to the top. The monster bass had let go and was gone forever, leaving me with only another fine fishing story about “the big one that got away.”

Jordan sure does know Bull Shoals Lake and how to put you on the fish. I can honestly say that won’t be the last time I go out fishing with Freedom Fishing Guide Service. 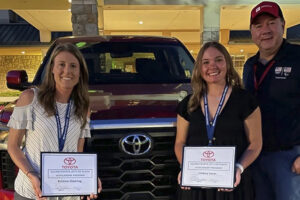 Lindsey Lucas, 15, is obsessed with all things outdoors with dreams of becoming an accomplished outdoor media provider and influencer. She was proud to be one of three recipients of the AGLOW/Toyota “Let’s Go Places” Scholarship. “The Toyota Let’s Go Places Scholarship Program was the brainchild of the Association of Great Lakes Outdoor Writers,” said Curt McAllister, Midwest Public Relations Manager/National Outdoor Communications Manager for Toyota Motor North America. “Collectively, we wanted to find a way to introduce a new generation of outdoor writers and influencers into this unique industry, buoyed by enthusiastic members who are eager to mentor and empower these scholarship winners.” The award provides all conference and travel expenses for recipients to attend the AGLOW conference and other events. Lindsey (center) is pictured with another award recipient, Kristine Ostertag and McCallister. Megan Postol (not pictured) was also an award recipient. AGLOW’S Tim Lesmeister added, ““The AGLOW/Toyota “Let’s Go Places” Scholarship was the brainchild of Jim Zalesky when he was President of the organization. The results have been nothing short of phenomenal and McAllister’s program is reaping tremendous rewards for both AGLOW and those new attendees who have discovered why there are many benefits to attending a conference of peers.”