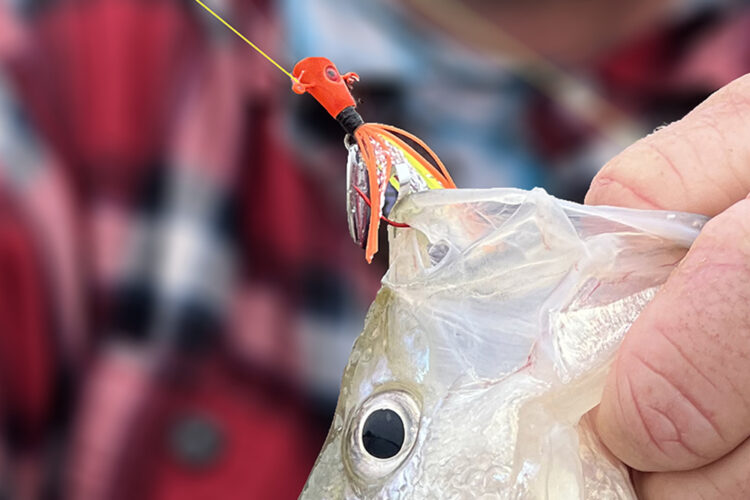 On this particular day Capt. Brannon Kirby felt sure that switching from a basic
jig head to Fin Spin jig from Crappie Magnet triggered the crappie to bite.

We had been spider-rigging Mississippi’s Enid Lake for far too long without a hook-up. Capt. Brannon Kirby with Barton Outfitters had been watching his Garmin Livescope closely and on more than one occasion, fish would swim up, investigate a minnow-tipped jig only to reject the offering and swim away. Capt. Kirby had sped up, slowed down, rigged plain hooks with a minnow only and an assortment of other things to try and trigger a bite.

“I’m going to try something else,” said Capt. Kirby as he lifted a rod, proceeding to tie on a new jig. “Let’s try a Fin Spin. Sometimes that little spinner is just what they’re looking for, especially when the water is colored up like it is after last night’s rain.”

Fin Spin’s from Crappie Magnet have a tiny, willow-leaf underspin. The jig’s shad dart shape creates a unique movement; a cup on the front of the jig forces water to the blade causing it to spin even at slower speeds.

We had trolled on for a little while and I had forgotten which of the eight rods held the Fin Spin when a rod tip bowed and Capt. Kirby lifted a pound-and-a-half crappie into the boat. Firmly in its jaw sat the Fin Spin.

Showing off the catch, Capt. Kirby said with a smile, “Okay, we’re changing every jig to a Fin Spin.”