Map Your Way to Crankbaiting Success, by Greg McCain 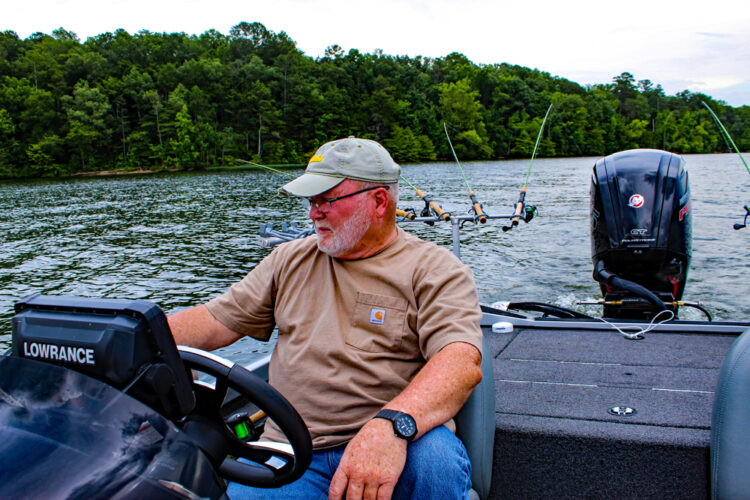 Jeff Barnes plots his course with his Lowrance electronics while practicing his point-to-point technique of pulling crankbaits. (Photo: Greg McCain)

Map Your Way to Crankbaiting Success

With crankbaiting there’s no end to crappie season

Analytics and crappie fishing are rarely part of the same conversation. However North Alabama crappie angler Jeff Barnes does take an analytical approach to pulling crankbaits for crappie.

Barnes uses data gleaned from his Lowrance HDS Gen 3 electronic units to guide his point-to-point trolling technique. Barnes literally trolls from one underwater contour to the next, angling from contour to contour on his home waters of Bear Creek, a sprawling tributary that empties into Pickwick Lake at the Alabama-Mississippi line. The creek is replete with up-and-down topography, creek channels, ledges, ditches, humps, points, and more. He pulls his crankbaits across as many of the contours as possible.

He says the result is a greater probability of encountering feeding crappie. Recalling his first trip pulling crankbaits with a friend about 10 years ago, Barnes said he didn’t understand the seemingly random nature of the process.

“I don’t like trolling and not know why I am catching fish,” he said. “I want to know why I caught that fish, and if I don’t know, I don’t really care if I catch it.”

After that initial trip, he adapted the standard straight-line trolling approach by crisscrossing creek channels, adding to the likelihood of putting crankbaits in front of crappie. About two years ago, he began studying his electronics maps in more detail.

“I’m still running across creeks channels, but I got to looking at all the contours on the map,” Barnes said. “I started trying to hit as many of those points on those underwater contours as I could. It has developed into a system that works.

“When I get all the rods out, I’m looking at the electronics. I’ve got the down scan on and I’ve got the side scan on. I don’t care if it’s a one-foot hump or a one-foot drop, if the (Navionics) map shows a contour, then I am going to hit it.”

While Barnes attempts to troll – he moves at 1.5 to 1.9 mph – a productive course, other elements of his technique are not as precise. He doesn’t stress over exact line length, opting instead to make a cast and put the rod in the holder.

“I know there’s somebody out there who can out fish me because they count their line out to exactly 208 feet,” Barnes said. “I just stand up and make a good long cast and put it in the rack. It works.”

Neither does he have a regular color rotation “other than I start with one pink.” He primarily uses Arkie 350s, Bandit 300s, and the discontinued Rebel Crank Rs in an array of colors.

“I’ll start with one type on one side and another type on the other side,” said Barnes.

“I don’t know all the differences between the types, maybe a little different wobble or maybe one runs a little deeper, but you will catch more fish on one type on a given day.”

“I want to know why I caught that fish, and if I don’t know, I don’t really care if I catch it.” ~ Jeff Barnes, Crappie Angler

He typically fishes out of the back of his boat with a spread of six or eight ACC rods paired with “cheap $12 (spinning) reels, and six- or eight-pound test line that I pay about $4 for a thousand yards.”

He racks the rods in Hi-Tek Elite Series holders.

When Barnes suggests the point-to-point trolling technique works on Pickwick, he has also put his theories into practice elsewhere. He has fished competitively and caught crappie with his pulling technique on other Tennessee River impoundments like Wheeler and Kentucky lakes, plus Barkley and Coosa River fisheries.

“As long as you have a good map from a lake with contours like Pickwick or Wheeler or Kentucky, you can predict where the fish are going to be,” Barnes said.

“For many years, I was a traditional structure fisherman who cast for crappie,” Barnes said. “By the end of April, I couldn’t find them. I would lose them. Now with this crankbaiting, there’s no end of the season. It never gets too hot for the fish.”

Regardless of the weather, Barnes can be found summer mornings pulling crankbaits on Pickwick. While he has plenty of coordinates plugged into his electronics, he generally plots his course based on what he sees on the map, which constantly reveals untapped spots.