In the Spotlight: Eric Cagle, by Tim Huffman 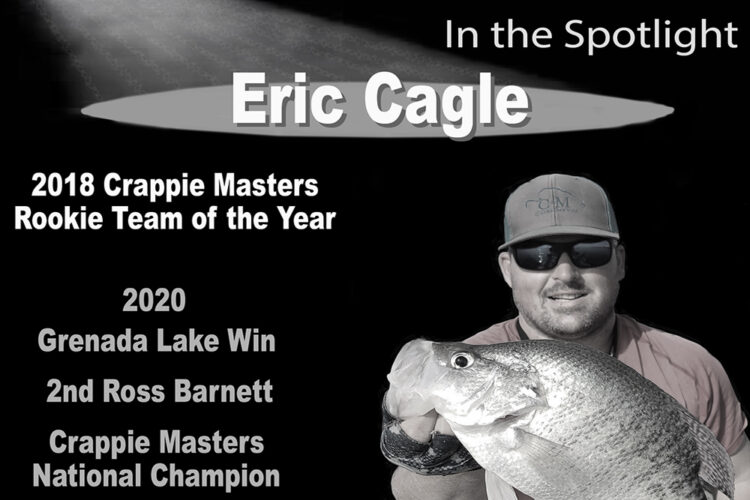 Alabama guide, Eric Cagle, has earned a reputation as a soft-spoken gentle giant, hard-working and a crappie-catching machine. He has stayed on the cutting edge of electronics and matches it with his casting/pitching technique to create a consistent and fun way to catch crappie. His sponsors are: HH Rods & Reels, K9 Fishing, Grenada Lake Tackle, Skipper Jigs and Pautzke Bait Co.

Cagle was born in 1984. He says his dad’s idea of baby-sitting was to throw a sleeping bag in the bottom of the boat where he would stay while his dad fished, so he has been on the water all his life. He played football at Huntington College in Montgomery, Alabama.

Cagle is a full-time guide, has fished national tournaments for three years, was half of the 2018 Crappie Masters Rookie Team of the Year, 2020 Grenada Lake tournament winner, was second in an October A.C.T. Ross Barnett tournament and fishing by himself, he won the 2020 Crappie Masters National Championship held in September at the Ouachita River.

Favorite lake? “Grenada. That place is hard to dispute as being the greatest crappie fishing lake in the country. I can’t believe the numbers of good fish there. I also like the Coosa River Chain.”

Fishing strength and weakness? “My strength is LiveScope and using a short rod. Weakness? Fish in extremely shallow water.”

An important tackle item? “Fluorocarbon line. I use monofilament for a long time when guiding, but after leaving it on the spool a few days it developed memory and caused looping problems. I switched to 6-pound-test K9 fluoro because it doesn’t have memory. That’s important whether recreational fishing, guiding or tournament fishing.”

Favorite fishing memory? “That’s easy. When PanOptics (LiveScope) first came out, I got to take my dad to the lake. He is an old-school fisherman and never had a graph. He would line up this pine tree with that oak tree. I got to take him out and let him see a crappie come up and take his bait. He giggled like a little schoolgirl and said, ‘Man, I didn’t think I would ever see something like that.’ He was shocked by what he seen and that was awesome.”

Hobbies: “I really don’t have a hobby. When not fishing I like spending time with my wife, Betsy. If I get a day off, I’m on the lake fishing working to learn and improve.”

Fishing hero: “I look up to Billy and Scott Williams because they are really good fishermen and were the only ones who helped me and gave me pointers when I got into tournament fishing. They helped me out a lot.”

Favorite Movie: “Return of the Titans.”

Fishing Superstitions: “I am superstitious. The Williams always eat doughnuts before a tournament and I would have some too. The first tournament I won, at Lake Talquin Florida, I ate a fried bologna sandwich that morning, along with the doughnuts. So that’s what I have every tournament morning. And yes, that’s what I ate at the Championship, too.”

About tournament fishing: “I like the competition. Mike Vallentine is a good guy and the Crappie Masters tournaments are good. I also fish ACT. Matt Morgan runs a great trail. I feel there is room for more than one trail and a fisherman can fish one or all of them. It gives a guy like me the opportunity to fish more places and tournaments.”

Something people don’t know about you?  “Many people know I played college football but they may not know I’m a two-time state champion wrestler.”