Have a Crappie Day with a Fly Rod, by Jim Mize 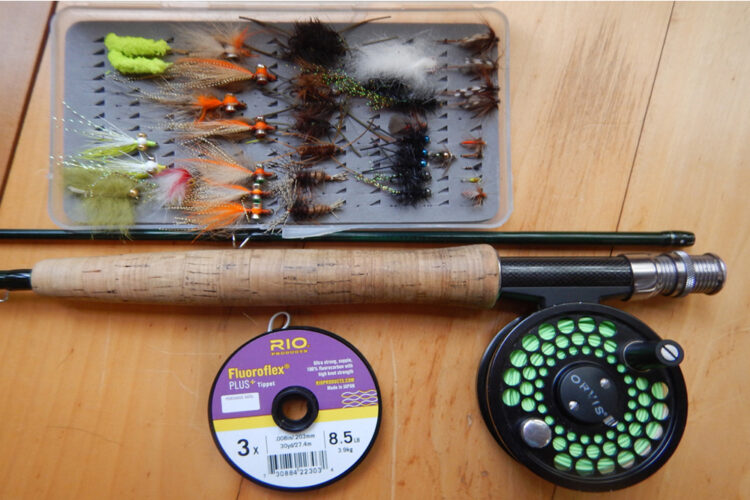 A 5-weight rod, weight-forward line, 3X-fluorocarbon tippet, and a box of flies make up my travel pack. (Photo: Jim Mize)

Have a Crappie Day with a Fly Rod

Whether seeking shallow crappie or jigging brush and treetops, a fly rod can be just the ticket.

I have a habit of taking a fly rod with me when I travel, and among my list of habits, this is far from the worst.  The result is that I occasionally find myself on good crappie water chasing them with a fly rod.  And in some situations, I’ve found I prefer it that way.

A fly rod excels is when crappie move into shallow water.  A couple of years ago, I had an evening to myself after working near Lake Wylie on the North Carolina and South Carolina border.  Having both states’ licenses in my wallet, I tried some water near the state line fishing from the bank.

Mostly I was prospecting with a streamer just to see what was there.  Back in a cove with some rock and brush on the shoreline, I quickly found crappie holding in two feet of water.  Casting parallel with the bank, I’d tease the streamer along and crappie would ambush the streamer from cover.

With the light streamer and floating fly line, it was easy to move the fly in shallow water and work it around the structure.  As evenings after work go, this was one of my better.

The other condition when a fly rod excels is when casting small, slow-sinking flies.  Many of the flies I use are too light to cast on a spinning rod without adding a float or other weight to the lure.  But that extra attachment on the line also impedes my ability to move the fly the way I want or to feel the bite.

At certain times of the year, fly fishing for crappie can be effective and fun.

At other times, I find a fly rod useful when just reaching into cover with a fly.  Fly rods tend to be longer than the average spinning rod and allow for easier management of some extra line as well.

One October, I was scouting the Saluda River below Lake Greenwood as I’d heard stories of stripers and other fish in the river.  As I walked the bank with my fly rod, I came upon some brush in shallow water that just looked fishy.  I reached out and lowered a streamer along the edge of the brush and jigged it gently.  A crappie gulped it and was soon in hand.

Standing on the bank and reaching out into the brush, I caught about twenty crappie in that one spot without having to cast.  Lowering the fly and gently jigging it inside and around the edges of the brush proved sufficient.

As far as tackle goes, if you fly fish for bluegill on their beds then you probably already have most of the right gear.  A nine-foot rod in either four or five-weight works just fine.  If you think you’ll be throwing heavier flies for bass or other fish, the five- weight may prove more versatile.

I use a floating weight-forward line as it helps cast a little farther and turns the fly over a bit better than a tapered line will.  For a leader, I often tie on a nylon butt section and a fluorocarbon tippet.  The nylon leader is cheaper and works fine.  The fluorocarbon tippet, though sometimes pricey, allows the fly to sink a little better.  Also, I use 3X tippet which is about 8 lb. test since on occasion a larger fish will latch on.

On my Lake Wylie trip, when I’d exhausted the crappie up in the shallows, I sent a cast out into the deeper water of the cove.  A three-pound blue cat took the fly and the heavier tippet came in handy.

As far as flies go, the main thing I want is for the hook to ride up like it does on a jig.  If you tie your own flies, you can do this several ways.  Clouser patterns work well on crappie and the dumbbell eyes flip the hook over.  They also make jig hooks in smaller sizes for flies that accomplish the same thing.  The jig hooks work best with slotted beads designed for these hooks.

One other approach is to use a bent-shank hook like the Dai-Riki #700B model.  By wrapping lead wire on the front and using a tungsten bead, this part of the hook rides lower and turns the hook over.  Any of these three approaches will present your fly in a manner less likely to get hung in the brush.

As far as patterns go, I usually fish jig flies or streamers that imitate minnows.  For the Clouser patterns, I’ll fish chartreuse and white or tan and white.  With jig flies, I generally have black or white patterns on hand and often add a little flash to the pattern.  Your favorite colors on jigs transfer well to streamers and jig flies.

A fly rod can be one more tool in your arsenal to bring out when crappie move up on the banks or are in reach of a long rod.  That same smile you get throwing poppers to bluegill beds will appear when you connect with crappie in the shallows.

(Jim Mize is an award-winning outdoor writer whose work has appeared in Gray’s Sporting Journal, South Carolina Wildlife Magazine, In-Fisherman, and many other publications.  His award-winning books of outdoor humor and nostalgia are available on Amazon or autographed copies may be purchased at http://www.acreektricklesthroughit.com.)