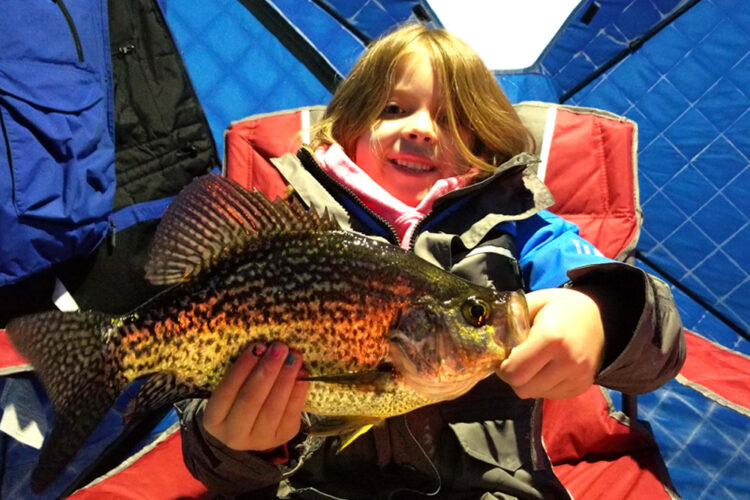 Noisy, rattling baits keep fish in your strike zone longer. Try dropping a jig with bait to seal the deal on fussy crappie, as the author’s daughter, Quinn, did with this slab. (Photo: Scott MacKenthun)

Fishermen usually like to be quiet and stealthy. But sometimes making a little noise will actually bring finicky crappie to you.

Most fishermen l now that sometimes noise can spook or scare crappie away. But mostly those are unnatural noises such as trolling motors, waves slapping a boat hull or anglers banging the bottom of the boat. However sometimes fish, including crappie, can actually be attracted to noise, provided the sound might be associated with something to eat.

Crappie ice anglers often face a dilemma – do I stay or do I go? Should you stay on the move, constantly cutting new holes and searching structure until you find active fish or should you hunker down and wait out schools of crappie that will be on the move and passing through?

If you’re an ice fisherman who is inclined to stay put, you might want to hedge your bets by encouraging crappie to come to you with aggressive, rattling baits.

Just like big buck whitetail hunters in the heart of Texas hill country, a little rattling can go a long way. Rattling hardbaits and jigging spoons are a very effective technique to drawing in schools of crappie. The noise and commotion can draw crappie to areas where they might otherwise roam through slowly and listlessly. They are quick to appear and then disappear if there’s nothing to hold their attention.

Choosing your location is a matter of not being too far away from where crappies already are, or want to or will be later. Try setting up on a location where crappies tend to roam or move through, places where crappies ambush their prey during the course of their daily movements. Calling in crappies only works if you are reasonably close to where the fish are or want to be; if you’re on the wrong side of the lake no amount of rattling is going to bring the school to your location.

Just like big buck whitetail hunters in the heart of Texas hill country, a little rattling goes a long way!

If you know fish are working in and near the last of the standing green vegetation, set up on the outside edge of a prominent weed bed. If you’ve found schools roaming over flats during the day or more commonly at dusk as large zooplankton and aquatic insects increase their activity, settle down and try and call some in on a random spot away from the crowd. If you’re fishing a lake for the first time, try obvious structural elements adjacent to contrasting depths – a reef or hump, a prominent point, or a fast breakline or shelf that connects deep and shallow water are places where crappie will move through as they hunt for prey in schools.

While crappies are not always aggressive, they are curious and respond to stimuli. A good one-two punch is steady but erratic jigging with a rattling bait and a second line with a jig and small minnow. Once the school is called in with a rattling bait, the setline does the dirty work and catches the fish. A little flash and a little rattle is great for catching a crappie’s eyes, ears, and lateral line system. Drop the bait to the bottom, stir up a little sand, muck, or silt, dislodge a few microinvertebrates along the bottom, and you can get a small feeding frenzy flurry going. Triggering strikes means using every trick at your disposal, whether it is changing baits or sizes or colors, tapping the bottom, or altering your jigging cadence and sound.

Rattling jigging spoons in small sizes (1/16th ounce to as large as 1/4 ounce) tipped with minnow heads or with plastic trailers are just the trick for an ice fishing rattling session. Clam’s Rattlin’ Blade spoon has a Pyrex glass rattle for very loud rattling noise. The Northland Tackle Buckshot Rattle Spoon has caught many fish through the years. The Lindy Rattl’n Flyer has a shape that falls erratically and a call that works. VMC’s Rattle Spoon calls fish from a distance and the UV glow works well in low light. Try an ACME Rattlemaster for fast drops and a metal-on-metal sound.

Drawing in a school of crappie to the call of a noisy jigging spoon or a boisterous hard bait is a great way to keep crappies underneath your hole and give you more opportunities to bring those fish topside. While running and gunning is a great way to move with schools and find fish, many times luring them to you is a better solution. Noisy rattle baits are a great way to draw in crappie schools, keep them near, and put more crappies on top of the ice this year.

(Scott Mackenthun is a fisheries biologist and freelance outdoor writer from New Prague, Minnesota. He can be reached at scott.mackenthun@gmail.com.)