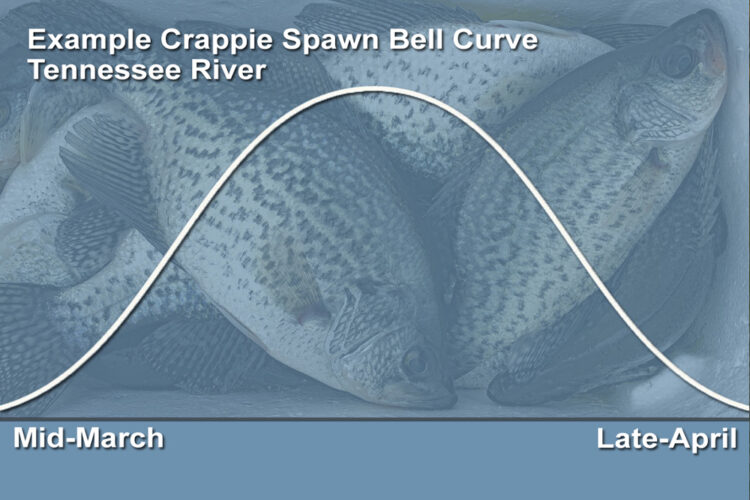 Some fishermen seem to think that every fish in the lake all rush to spawn at the exact same time. Not so, some spawn early while some spawn late. Calculating the peak spawn is almost always best illustrated using a bell curve.

Spend a little time in any fisherman’s boat and sooner or later someone is going to ask, “What’s the water temperature?”

Some folks live and die by it while others could care less. But it is true that knowing the water temperature can help you understand when the PEAK crappie spawn might occur in your area.

But first, it is critical to know that the spawn for any fish species is ALWAYS a bell curve. Whether it’s genetic or some other mystery variable, fish actually do have individual triggers. That means some will spawn early and some will spawn late. The spawning period can stretch over a month or more, but within that month there will usually be a week or two when a significantly higher proportion of fish will be making baby fish.

The Missouri Dept. of Conservation says in that state, crappie may spawn as early as mid-March in the southern part of the state and as late as the end of May in northern Missouri. They say the spawn generally occurs when water temperatures reach 55 degrees.

Meanwhile the Tennessee Wildlife Resources Agency says the white crappie spawn peaks when water temperatures are between 60 and 65. Black crappie peak between 62 and 68. Those temperatures routinely occur from late-March until late-April.

Go far north to Wisconsin and the Dept. of Natural Resources also says black crappie spawn between 64 and 68 degrees. However, their water won’t get that warm until in May and June… sometimes into July.

But remember that no matter what the calendar or thermometer says, the best time to go fishing is when you can.