Match the Hatch, Even for Crappie 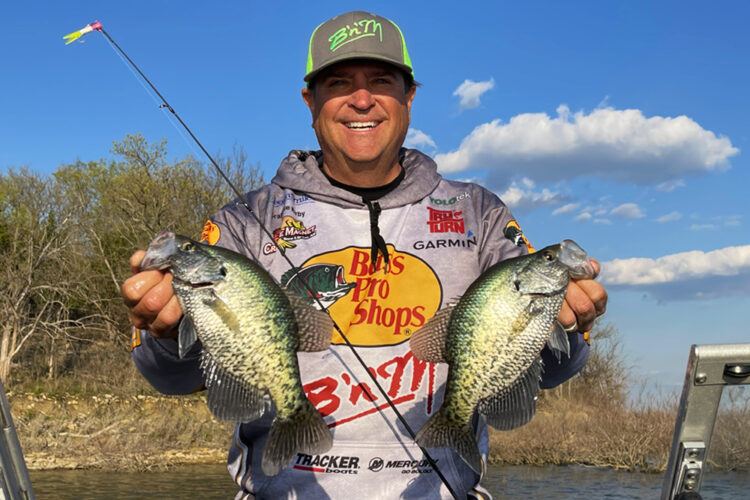 Kirby Ham, who runs the Crappie Kirby Guide Service in Kansas, shows off proof-positive that fishermen can benefit by matching the hatch.

Match the Hatch, Even for Crappie

Trout fishermen routinely try to “match the hatch.” But crappie anglers need to do the same.

On a cool mid-April evening, Kirby Ham was borrowing a page out of the trout fisherman’s book. He was attempting to match the hatch.

Fly fishermen are renowned for their ability to match their lures to the insects they see on the stream, occasionally even tying an imitation on the spot.

But Ham and many other crappie fishermen know that ability to match the forage their target species – crappie – are feeding on can be important as well.

When Ham saw small baitfish dimpling the surface on Pomona Lake in eastern Kansas, he immediately downsized his offering to a white and chartreuse Crappie Magnet grub. It didn’t take long for him to realize that lure would fool the fish.

When he spotted a school of crappies on his LiveScope, he cast out his plastic bait and slowly retrieved it over the top of the brush.

“Dropping down to crappie town,” he said. “I’m looking for the mayor.”

Seconds later, he found the mayor. Looking down at the screen of his LiveScope, he watched as one of the marks on his screen raced up and intercepted his lure. Setting the hook, he felt the solid weight of a big fish.

“They’re out here staging before they move in to spawn,” said Ham, who runs the Crappie Kirby Guide Service in eastern Kansas.

“When they’re on the banks, they’ll hit anything. They’re just protecting their nests,” said Ham. ““But right now, they’re feeding up before the spawn and it can be important to match what they’re feeding on.”

It was hard to argue on this outing. As Ham and I cast the Crappie Magnets on small Fin-Spin jig heads (a cupped jig head with a small spinner attached), we whet the appetite of a school of hungry fish. And not just crappies. We caught white bass, hybrid striped bass, channel catfish and green sunfish, too.

All of this on an evening when larger grubs had first proven ineffective. Ham wasn’t surprised. Sometimes, it takes a specific look and profile to match the hatch and fool the fish, he said.

“I like three-color combinations,” said Ham, who lives in Olathe, Kan., and is a member of the Bass Pro Shops pro team. “I’ll use a solid-color jig head and a jig with two other colors, maybe white and chartreuse, purple and chartreuse or black and chartreuse.

“You look at the shad we have in Kansas and you’ll see that they have some of those color combinations. A lot of it depends on the water clarity.”

Ham recalls a trip just after ice-out several years ago as proof. He was using a dark-colored jig without much success when he ran across several shad struggling in the cold water.

“They were an iridescent, white color,” Ham said. “So, I switched to a white color and it was lights out. There was no question that the color change made a difference.”

I too have seen the difference matching the hatch can make.

I remember one day when I was finding only moderate success catching crappies on the subdivision lake I live on in a suburb of Kansas City, Mo. I tossed a couple of fish into the live well on my boat and my partner soon called out, “You have to see this.” The few crappies we caught were regurgitating small, light-blue colored minnows.

I went to a shortened Z-Man TRD that matched the color of those minnows, and we soon started catching crappies with regularity.

The same thing happened on a night-fishing trip when I was dropping my baits into the beam of a fixed light hanging over a dock. My traditional twister-tail grubs weren’t attracting much attention, despite the school of shad circling the water and the gamefish I marked below them. But when I noticed the mayflies dropping into the water were quickly slurped up by bluegills and crappies, I went to an off-brand yellow plastic lure and affixed it to the lightest jig head I could find.

Success. My catch rate increased dramatically until the lure became so tattered that it was unusable.

I’ve seen the opposite effect when fishing for surfacing white bass in the summer. After many casts into the middle of the activity without a hit, it became obvious that they were feeding on something much smaller than I was offering. By the time I figured it out, I ran out of daylight and I conceded defeat.

The importance of the shad hatch

Terry Blankenship, a guide at Lake of the Ozarks, bases the size of the jigs and grubs he uses on the progress of the shad hatch.

“Around the first of July, we get our first hatch of shad,” he said. “That’s when I’ll go to a smaller bait to match the size of what they’re feeding on.”

“It makes a difference,” he said. “I’ve caught a lot of big crappies by going to that smaller bait.”

Blankenship gradually increases the size of his offerings as the shad grow larger. When he shoots docks, he prefers the larger profile of a three-inch bait. And in the fall, he will also use a bigger bait to match the size of the adult shad.

When the water gets colder in December and January, he often reverses course and goes to a more-subtle, smaller bait under a bobber to get the crappies to commit.

“A lot of times, that profile is critical,” he said. “You want to give them something that looks familiar to them.”

(Brent Frazee is an award-winning writer and photographer from a suburb of Kansas City, Mo. He retired from the Kansas City Star in 2016 after working as the outdoors editor for 36 years. He now writes for magazines, websites and newspapers.)