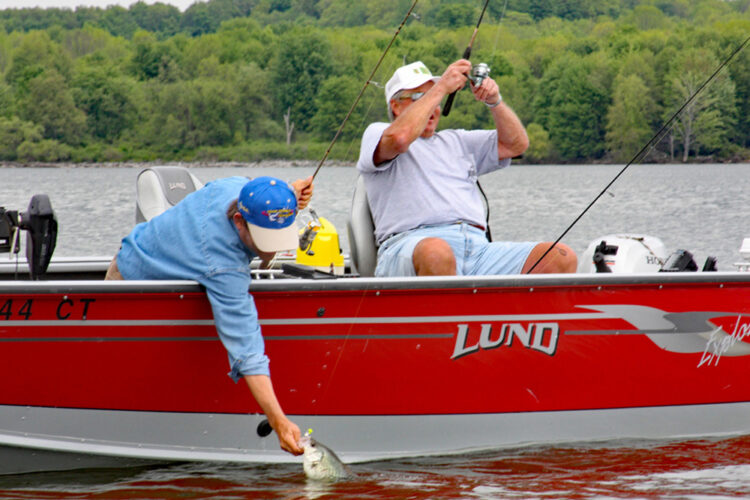 Anglers enjoy success drifting with minnows supported by floats through a shallow stump field on Pymatuning Lake on the Ohio-Pennsylvania border.

When I was a kid in the 1950s, Dad and I would seine creek minnows on Friday evening to go crappie fishing on Saturday.

Hardly anyone catches their own bait any more. Today’s anglers buy minnows and other live bait to be used for crappies. But when you have choice, it is still important to choose your bait carefully.

Generally, anglers who have fished all three species, believe the flashier emerald shiner is superior in attracting strikes compared to the dull, dark fatheads. However, being able to withstand water temperatures fluctuations and low dissolved oxygen as well as lasting longer on a hook, fathead minnows are hardier by far than any shiner.

Twenty years ago, emerald shiners were trapped primarily from the Great Lakes and connecting waterways…until Viral Hemorrhagic Septicemia (VHS) disease was discovered in certain Great Lakes fish populations. States moved quickly to ban the sale of emerald shiners outside the Great Lakes watershed unless the shiners could be certified VHS-free, and that certification had to be provided to the angler on a receipt.

Suddenly the favored northern crappie minnow could no longer be sold or transported to much of the northeast and upper mid-west. Furthermore, while bait shops sell larger size golden shiners for bass, walleye and pike, only a handful of shops carry crappie-sized golden shiners. So, in terms of availability across the northern tier, fatheads dominate.

Yes, small shiners may be seined or trapped from clear-water streams by an individual determined to use a flashier live bait – but it’s going to cut in on your fishing time.

If you preferred presentation is bobber, then use a light wire Aberdeen hook with the minnow tail-hooked in order to obtain the most action from your live bait.

Ideally live minnows should be transported in an insulated container with a battery -operated aeration system, with roughly two gallons of water per two to three- dozen small minnows. I have used the same Engle Live Bait Cooler for years successfully. New ones come with a lift-out net and a 12-volt adaptor to keep bait aerated without running down your batteries. The 13-quart model will meet most crappie anglers’ needs.

For longer storage of bait at home, add a 110-volt aquarium pump to an insulated ice chest. Position the bait chest in your basement, garage or shaded porch. Change the water (unchlorinated preferred) about every three days. But to keep them through summer heat, you must be able cool the water.

The two most common ways to rig a minnow to keep it lively is lightly through both lips, or in the upper back between the dorsal and tail. I prefer the back-hooking method for still fishing presentations because the minnow struggles to swim away. However, for casting, pulling or pushing minnows, hook-through-the-lips is the way to go.

If your preferred rig is a hook and bobber, then a light wire Aberdeen hook is recommended. This style of hook will generally bend out when snagged to prevent the line from breaking and then it can be easily reshaped to keep on fishing. I’m a fan of TTI Blakemore’s Tru Turn Aberdeen in Blood Red or Bronze in sizes #6 and #4.

A live minnow roughly 2 inches in length is desired by most crappie anglers. There are times, however, when smaller and larger baits are useful. A one-to-1.5-inch minnow on a #8 or #10 hook generally performs better during ice fishing season and at ice out. Also baits in the 2.5 to 3-inch range on a #2 hook will produce nice size crappies during the summer as the lake’s baitfish grow into maturity.

The role of a bobber or float is critical in several crappie presentations. Whether fishing shallow or deep, stick with a slip bobber if still fishing a minnow. With the slip bobber sliding down the line to just above the bait for casting, longer and far more accurate casts are possible than with a fixed bobber. I generally use a Thill Sliding float along with a stop knot and bead to position the bait at any depth setting.

However, if you intend is to use a bobber in conjunction with a jig-n-minnow to suspend the bait above the bottom or skimming tops of vegetation during a constant slow retrieve, then a fixed bobber must be used. A 1.5-inch oval shaped plastic model or a small round weighted float are commonly employed for this.

Although some may argue otherwise, I believe there is a limit to the effectiveness of a slip float. For me that is roughly 8 feet. If summer crappies are located near bottom structure at depths greater than 8 feet, I will go to a double hook drop-shot rig to get minnows down to them. With the weight positioned below the bait, a firm rod sweep securely hooks the fish compared to a slip float rig.

The “Other” Live Bait

There is another, less popular or well-known live bait for crappies – insect larvae. During ice fishing season and immediately after ice out in the spring, do not depend solely on minnows; there will be days crappies hit larvae better. Be sure to have a container of maggots or waxworms to tip very small ice jigs.